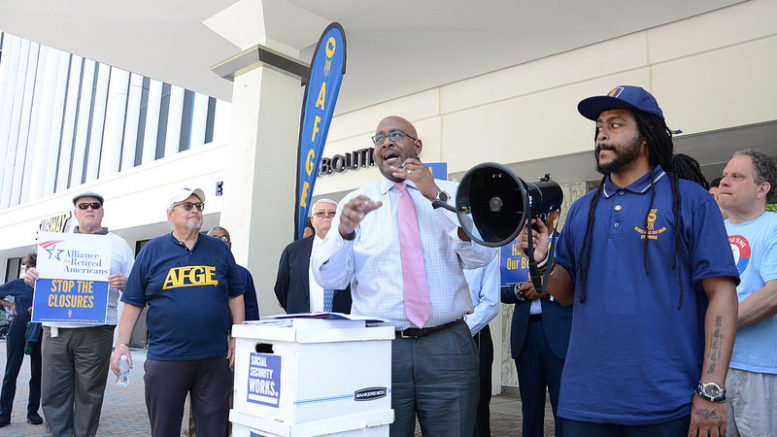 Now, in an exclusive interview with Payday Report, American Federation of Government Employees President J. David Cox says that the move is intended to target minorities.

Traditionally, affirmative action programs and a workforce that is unionized at four times the rate of the private sector, have made the federal government more attractive to minorities. While African Americans account for only 10% of the civilian workforce, they account for 18% of all federal workers.

Now, the culture of these agencies is changing as the Trump Administration has signaled that it intends to take on federal workers.

“The new executive orders are going to make even harder for us to recruit and retain people of color,” says African American U.S. Department of Veterans Affairs worker Linda Ward-Smith, speaking off-the-clock in her capacity as President of AFGE Local 1224. “[The executive order] is going to make it easier for them to discriminate against those disadvantaged populations that we have problems recruiting.”

The new executive orders, proposed by Trump, would dramatically change the threshold under which employees can be fired.

Under previous federal work rules, if an employee was determined to be doing an unsatisfactory job with an employer, they had a 120 day warning period during which to improve their performance. Now, under the new rules, workers would only have 30 days to improve performance–a standard, which union officials believe will be used to quickly dismiss employees without giving them chances to improve.

In addition, the bars of evidence needed to take discipline against employees have been dramatically lowered.

“This is just giving management more power to just get rid of people because of whatever reason, “ says Ward-Smith.

The moves have created a sense of fear among many people of color in the federal workforce who worry they will be targeted by the notoriously racist Trump Administration.

“I think with Trump being in power [there is] hostility towards people who are disadvantaged, people of color, even people with disabilities, I think that the hostilities towards individuals, who typically have a hard time defending themselves, this is now making it easier for them to just being discriminated even broader” says VA union leader Linda Ward-Smith “I think definitely it’s going to increase the number of discrimination cases because it pretty much like there are no boundaries, so you can do what you want to do.”

For many people of color in the federal workforce, the rollbacking of the rules is a major setback for those that say the federal government is a friendly employer for minorities.

“They are making us all at-will employees, which is what it all boils down to and a lot of times, we take this jobs for protection,” says Ward-Smith. “This is why we come to the federal government because we have unions, but now it is like just as bad as the private sector”.

While the Trump Administration has moved to increase their ability to fire workers, they have also weakened the ability of the union to represent workers.

Even if elected union officials clock out to help, it’s now more difficult for them to meet and talk with workers.  No longer are workers allowed to use federal computers or federal email to communicate across workplaces.

Workers at the federal agency fear the agency will simply impose one on them, instead of bargaining over a new union contract set to expire this summer.

In March, the administration moved to impose a union contract on Department of Education workers, stripping them of many civil right gains in the federal workforce, won over decades.

“For decades, the federal government has worked hard to develop a highly effective and diverse workforce, and now we’re seeing that be dismantled. We’re seeing reasonable accommodations for individuals with disabilities being wiped out of CBAs,” says AFGE President J. David Cox.  “When you look at these actions as a whole it becomes clear that these actions and policies seek to diminish services, protections, and the rights that exist to protect and aid women and minorities.”

“We’ve been getting statistical data about their appraisal system over the last four years, we have seen that it is discriminatory. Twice as many whites as minorities people get the highest rating,” says Skwierczynski, whose union has filed four class-action grievances against the Social Security Administration for using a promotion system that they say is discriminatory.

Now, workers at the Social Security Administration wouldn’t even be allowed to file grievances saying that promotion systems are racially discriminatory.

While the legal avenues for workers to push back within the federal government are closing, workers say that they intend to take to Congress to make their case. Workers at the politically popular Social Security Administration are currently organizing rallies around the country aimed at both stopping the closure of Social Security offices and the union busting of the heavily African-American workforce at the Social Security offices.

It’s an uphill battle, but so far the unions have had some success in mobilizing public support on behalf of federal workers. Even 22 Republicans in the House have signed onto letters asking the Trump Administration to stop the rollback of federal workers’ rights, raising the prospect that Congress could take action to stop Trump’s union-busting plan.

For many people of color, who have seen the heavily unionized federal government as a way out of the abuses of  the private sector, it’s a fight well worth having.

“We gotta get the word out,” says West-Smith. “We gotta fight back.”

Be the first to comment on "EXCLUSIVE: AFGE Says Trump’s Union Busting Aimed at Minority Workers in Federal Government"