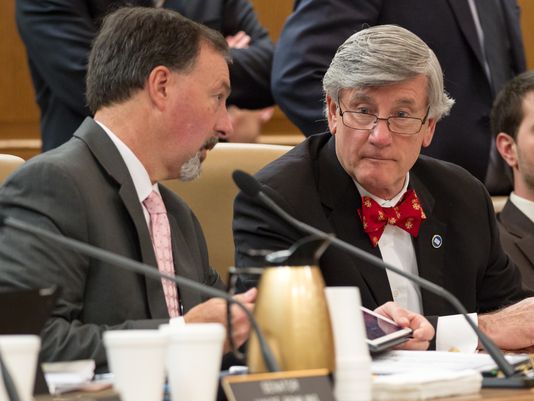 Republican State Senator Todd Gardenhire, who has come under fire for his role in getting a local NPR fired. (The Tennessean)

It’s Payday folks. Greetings from Raleigh, North Carolina, where Payday has been for the past two weeks.

This week’s Lunch Pail goes out to the 32 reporters at The Intercept who opted to go union this week and join the Writers Guild of America East.

The Intercept marks the 15th digital media outlet to go union in the last two years (since the Washington Post wrote its infamous article, “Why Internet journalists don’t organize”).

One reporter who could have used a union is Jacqui Helbert of the University of Tennessee-Chattanooga (UTC) NPR affiliate WUTC. Helbert, who is a lesbian, was fired after Republican Tennessee State Senator Mike Bell made disparaging statements about transgender people to students from the Cleveland High School Gay-Straight Alliance. Reportedly, Bell made several of the transgender activists cry with his statements mocking them.

Bell later claimed that Helbert failed to identify herself as a reporter when she recorded the statements. However, Helbert stated that she was wearing a press badge and carrying radio equipment (a 22-inch long fuzzy radio microphone and a large headset) when she recorded him.

NPR officials at the national level have condemned the firing and urged their affiliate in Chattanooga to rehire Helbert.

Now, new emails obtained by hot-shot Chattanooga Times Free-Press reporter Kendi Rainwater show that state legislators placed pressure on UTC to fire Helbert. WUTC is owned by the University of Tennessee-Chattanooga and receives an additional $510,000 a year in funding from the university.

The emails show that Republican State Senator Todd Gardenhire met with top UTC officials on March 20 and urged the firing of Helbert. Following the meeting, UTC Chancellor Steve Angle argued that Helbert should be fired.

“The potential repercussions for the state representative and UTC are HUGE,” wrote Angle in an email obtained by the Chattanooga Times-Free Press. “We could easily lose all funding we are providing to WUTC.”

Protests have erupted on UTC’s campus about the firing. Helbert is also suing the university for wrongful termination.

Dylan Petrohilos is a long-time champion of digital media workers’ rights and led a successful organizing drive and first contract campaign at Think Progress. This week, Petrohilos’ home was raided by the DC Metropolitan Police Department.

The cops raided Petrohilos’ home for his alleged role in helping to organize anti-Trump protesters. They are investigating Petrohilos on conspiracy to incite riots during the Trump inaugural ceremonies.

Several computers, phones, and electronic items were confiscated from Petrohilos’ home. Petrohilos has launched a GoFundMe to raise money to replace the items.

Currently under West Virginia law, workers who go on strike are entitled to unemployment benefits. However, a bill passed by the West Virginia State House of Delegates could soon change that by denying the striking workers of their benefits.

“This is just, in my opinion, a very unfair piece of legislation to workers who in the event have to go on strike to use the tool of withholding their labor to get a fair and just contract,” United Mine Workers Vice President and Democratic West Virginia House Delegate Mike Caputo said in a floor speech this week.

An earlier version of the bill was passed by the state Senate. Now, the bill goes back to the Senate to reconcile differences between the Senate and House versions. Observers expect the bill to pass and go into law.

In June of 2016, Miami Beach passed a law that will increase its minimum wage to $13.31 an hour by 2021. However, a state judge this week struck down the law, saying that Florida currently bans municipalities from setting their own minimum wage.

Proponents of the Miami Beach minimum wage increase, such as Sandy D’Alemberte, dean emeritus of the Florida State University College of Law, argue that a 2004 amendment to the Florida State Constitution that allows the state to set a higher minimum wage than the federal level should also allow municipalities to set their wage higher than the state’s wage.

“It ignored controlling Florida Supreme Court precedent holding that when a prior statute conflicts with the will of the people expressed in a constitutional amendment, it is the people’s judgment that controls,” Rosenwald told the Miami Herald.

Rosenwald has asked that the case skips the appellate process and proceed directly to the Florida State Supreme Court, where he is confident that he will prevail.

The issue of local minimum wage preemption is likely to be a hot-button political issue as the 2018 Florida governor’s race heats up. Miami Beach Mayor Philip Levine is exploring running for Governor and has already taken out TV ads criticizing the move to block the city’s minimum wage increase.

In other Florida news, the state’s House of Representatives passed a bill that would automatically decertify any public sector union whose membership dips below 50%. The bill, however, exempts firefighters, police and correctional officers from this provision.

Critics charge that the law is unconstitutional since it violates the right of free assembly for workers who wish to join a union.

While the bill passed Florida’s House this week, it is expected to die in the Senate.

Talk Poverty Editor Greg Kaufmann celebrated his 49th birthday this week and shows no signs of slowing down. Kaufmann wrote a long piece that explores how Mississippi is taking advantage of the Trump era to seek federal waivers and pass bills such as the HOPE Act, which would restrict access to the federal safety net.

The HOPE Act applies to all Mississippians who receive Medicaid, TANF (income assistance), or SNAP. Anyone enrolled in those programs will have 10 days to reply to a written request for information proving eligibility, as deemed necessary by a private contractor hired by the state. That deadline would be tough for anyone to meet, but the fact that many program beneficiaries are disabled, unemployed, lack stable housing, or are simply living under the everyday pressures of poverty makes the deadline all but impossible for many people.

“Just getting that notice to program participants can be a real challenge,” said Matt Williams, the director of research at the Mississippi Low Income Child Care Initiative. “Then you’re talking about making sense of a lot of highly technical information, and putting that in written form too.”

Currently, a Mississippi Department of Human Services (DHS) caseworker determines eligibility by sitting down with an applicant and sorting through liquid assets, utility bills, loans, child-support payments, child-care costs, employee pay stubs, and other sources of income and expenses. It’s a time-consuming process, but the agency has been rewarded for doing it well. Between FY2012 and FY2014, the department received $8.75 million in bonus federal funds for its SNAP-payment accuracy rates.

Under the HOPE Act, however, that kind of reciprocal relationship and guidance will be gone. “People will have to figure out on their own how to acquire the requested information and then explain it—in writing—within 10 days,” said Williams. “If they don’t, they’re going to be kicked off.”

Rep. Brown and other proponents claim that the state will save money through this privatized system. But the assertion is belied by the state’s own analysis, which was conducted by a private firm that supports the legislation. It estimated a cost of $10 million to $12 million, with about $2.5 million covered by state taxpayers. Williams said even that would be hard to come up with given the state’s tax and budget cuts over the past two years. But the actual cost will likely be much higher, and the study wrongly assumed that the federal government will pick up most of the tab for the privatized system. Tennessee considered nearly identical legislation and found that it would run $81 million with the state covering 95 percent of the cost. The legislators killed that bill.

Legendary civil rights lawyer Lolis Elie died this week at the age of 89.

The Times-Picayune has a long look at Elie’s community involvement and civil rights’ trajectory over the course of his life.

The New York Times also has a great obituary of Elie:

In one instance he was the star witness in a lawsuit against Louisiana’s ban on out-of-state lawyers representing criminal defendants. Anthony G. Amsterdam, an emeritus professor at the New York University School of Law, who was a lawyer for the NAACP Legal Defense Fund and the Lawyers Constitutional Defense Committee, recalled Mr. Elie’s powerful testimony.

“On cross-examination,” Professor Amsterdam wrote in an email, “the state’s attorney was dumb enough to ask him: ‘Mr. Elie, is it not true that the condition of Negroes in the State of Louisiana has improved during the past five years?’ Lolis said, ‘Yes, but … ’ And then went on to give a two-hour answer that was easily the finest, most fiery civil-rights speech I have ever heard — in court, in church, or anywhere else.”

“The judges were enthralled,” the professor continued. “They sat there drinking it all in. They didn’t even call a break for lunch when the usual lunchtime hour came in the middle of his answer.”

— The Al Jazeera “Fault Lines” series has a stunning new documentary called “The Prison Farm” out this week on Youtube. The documentary uses smuggled cellphone videos to document the retaliation that strikers in the prison have faced.

— AL.com has a photo gallery this week of 54 products made by prisoners that are available for commercial production in Alabama.

— Poynter has a long interview with The Daily Tar Heel Executive Director Betsy O’Donovan on how they have been able to turn around their deficits while increasing news quality.