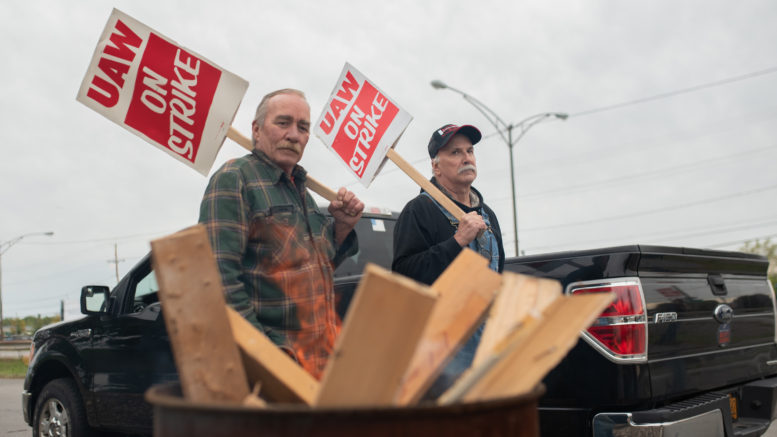 “G.M. won something that it had rarely attained in the past outside of bankruptcy: the ability to close three plants economically,” wrote the Times’ Neal E. Boudette.

With the final tally in, UAW members voted 23,389 to 17,501 to accept the agreement that GM and UAW leaders worked out—a margin of 57 percent to 43 percent. These results show that workers are bitterly divided between those who benefit under the contract, and those who fear that their plants would close under the deal.

In past contracts, General Motors would commit to allocate certain products to individual plants. This contract, however, does not contain those written guarantees for most plants, leading many workers to fear that their plants would be at risk of closing.

At Rochester’s GM Operations, where workers are scheduled to cease production of fuel-injection components in 2021, workers voted overwhelmingly against the contract by a margin of 100 yes to 526 no.

“Without injectors and fuel rails, two-thirds of our production is going to be gone, and I can’t see how you can keep the plant open producing one-third—it’s not a good sign,” says Tom Hauck, an electrician at the plant, who voted no.

“As far as I am concerned, anybody that votes yes for this contract talk is selling out the American people,” says Hauck.

Not only did Rochester not get any commitments for future production, but workers there also remained on the lower wage tier of a two-tier system, which caps pay for operators at auto supply parts factories at $23 an hour. Under the new contract, warehouse workers also continued on a second-tier wage system with their wages capped at $25 an hour.

However, the majority of GM workers did find a reason to vote for the contract, as it made some improvements for many UAW members. It shortened the period for second-tier employees to transition to first-tier wages. It lifted caps on profit-sharing bonuses, which often can range from $7,000 to $10,000 for many workers.

Christina Horvath-Badge, a worker at GM’s Toledo Transmission plant, where workers voted for the contract by a margin of 1,134 to 282, voted yes.

Horvath-Badge recognizes that many workers are upset with some portions of the contract, but feels strongly that it’s a good agreement—particularly the section that shortens the period for second-tier employees to get up to the first tier.

“I voted yes for the contract because I feel being on strike has not been easy,” says Horvath-Badge, who worries that if the union had stayed out on strike that the UAW would have risked losing community support after the details of the contract were made public.

“Solidarity also doesn’t mean that we all win everything we want at the same time,” says Horvath-Badge.

Chris Brancato, a worker at GM’s Rochester Operations, says GM was able to successfully divide workers against one another by making improvements for just enough workers to have the contract pass, while leaving folks like him vulnerable at plants at risk of closing.

“They try to get enough to sweeten the pot to get people to yes votes. They give a little to this segment, a little to that segment. They divide us by as many categories as they can by trades, production, and that’s how GM wins,” says Brancato.

Brancato also says that the ratification bonuses offered by GM ($11,000 for permanent employees, and $4,500 for temporary employees) also played a role.

The division among the union’s GM members could be invoked by labor’s enemies to fight the UAW, which is already mired in a corruption scandal that has six top union officials convicted on corruption charges.

“After a six-week strike that cost each GM worker $6,000, the Spring Hill plant rejected the UAW’s endorsed contract,” read the ad. “Some workers say they ‘gained nothing’ from the strike.”

Despite the problems with the contract and the corruption scandal at the top of the UAW, many workers who voted no say they remain committed to improving the union.

“I think everyone can use a reminder that each of us is the union,” says Barry Burdue, who voted no on the contract at his Parma, Ohio, plant, where the contract narrowly passed by a margin of 438 to 404. “We can always do better, and it would be a good time to get up, suit up, and show up for our union service work.”