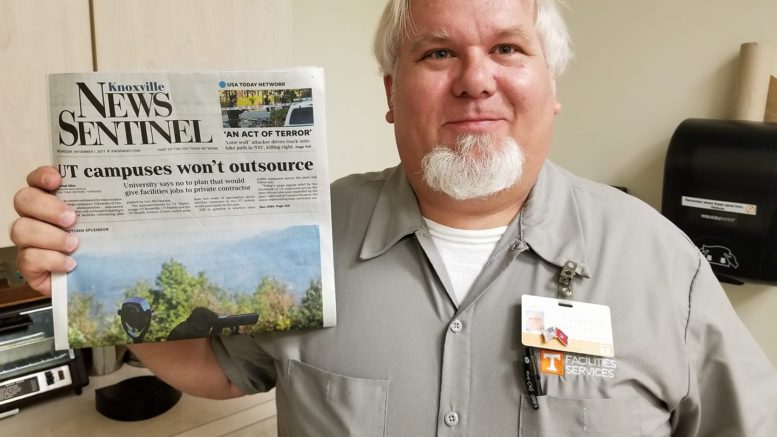 Locksmith Edward McDaniel, a member of the United Campus Workers, celebrates the defeat of Republican Governor Bill Haslam's plan to outsource jobs at the University of Tennessee.

Despite lacking collective bargaining rights, the United Campus Workers (UCW), an affiliate of the Communications Workers of America (CWA), have dealt a death blow to Republican Governor of Tennessee Bill Haslam’s $300 million plan to outsource thousands of custodial, maintenance, and repair jobs throughout the University of Tennessee system.’

“It feels like we did the impossible, we won against the richest Governor in America,” says Edward McDaniel, a Knoxville locksmith whose job was saved. “It was a  major victory for the working class”.

The United Campus Workers (UCW), an affiliate of the Communications Workers of America (CWA), have dealt a death blow to Republican Governor of Tennessee Bill Haslam’s $300 million plan to outsource thousands of custodial, maintenance, and repair jobs throughout the University of Tennessee system.

The defeat of Haslam’s outsourcing plan is a major victory for CWA’s nearly two decades-long effort to build a dues-paying base of 1,700 members despite lacking any formal process for dues check or collective bargaining.

The victory by the United Campus Workers is a win not just for Tennessee campus workers, but for groups opposing the outsourcing of university jobs nationwide. The multinational Jones Lang LaSalle (JLL) had hoped that the $300 million contract would serve as a template for outsourcing other campus jobs nationwide.

The announcement yesterday by administrators of the University of Tennessee-Knoxville, UT- Chattanooga, UT-Martin, and the UT Health system that they would not outsource their work put a wrench in JLL’s plan to expand their outsourcing efforts. The decision by the UT system not to outsource follows assurances made by administrators at the University of Memphis, Middle Tennessee State University, and Eastern Tennessee State University that they would reject Republican Governor Bill Haslam’s outsourcing scheme.

Following the defeat of union drives at Boeing in South Carolina, Volkswagen in Chattanooga, and Nissan in Canton, Mississippi, campus workers in Tennessee have offered a sharp rebuttal to those who say it’s impossible to win victories in the anti-union South.

The victory by UCW also provides a roadmap for how public sector unions, facing the risk of losing dues check off, can continue winning victories by building community alliances and mobilizing their members to put pressure on lawmakers.

“You can’t underestimate what organized labor can do even without dues check off,” said UCW President Diana Moyer, who works in research development at the University of Tennessee-Knoxville.

To defeat Governor’s Haslam’s bid to privatize the janitorial jobs, the campus workers lead a two-year long effort to rally lawmakers against the proposed changes, holding lobby days where they met with Republican state legislators in districts where the university system is a major employer. Gradually, they managed to build up a bipartisan coalition of 75 General Assembly members who came out in opposition to the governor’s plans.

“Being involved in this bipartisan effort has really given me faith again that democracy can work” locksmith Ed McDaniel stated at a rally in the state capitol in Nashville last April.

Working closely with Faculty Senates in a number of locations, campus workers helped to issue reports that raised questions about the cost overruns of the proposed contract and its potential negative effects on the local community. Through their efforts, they say that they will able to peal off significant support from Republican state legislators to give local university administrators political cover to reject opting into the Republican Governor’s outsourcing plan.

“What we were able to do was work with community groups to show elected officials that they were cut off [from] this process and there was a lot of that hadn’t been discussed in this plan” said Moyer. Moyer says that many lawmakers were shocked when in meetings with union activists, they raised serious doubts about the cost savings formulae of JLL.

“What we showed here is that when you have organized labor and people who are willing to fight good jobs, you can really do amazing things,” says UCW President Diane Moyer.

Donate to help us continue to keep covering the struggle of public sector workers lacking collective bargaining rights in the South.

Be the first to comment on "Despite Lacking Collective Bargaining Rights, Tennessee Campus Workers Defeat Outsourcing in Major Victory for Public Sector Unions"