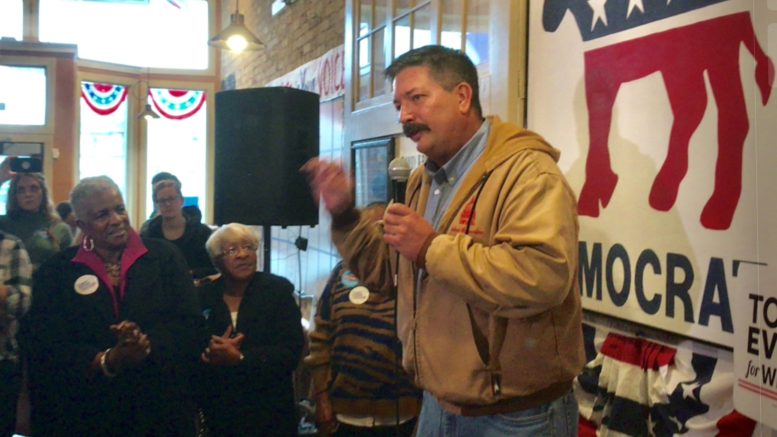 RACINE, WISCONSIN – On Sunday afternoon, a light freezing rain starts to fall as a heavy wind picks up off Lake Michigan. Canvassers cling to clipboards as they rush to protect their lit as they rush their way inside to the warmth of Racine’s Democratic Party Headquarters.

Inside, local Democratic activists load up on coffee and soup as they prepare to head once again into the November cold of Wisconsin.

“It’s not easy being blue,” jokes Penny McGuire, a raincoat-clad retire. “You gotta come out, the weather can’t hold you up”

Inside, Senator Tammy Baldwin gets up on a wooden box to rally the activists to go once more into the freezing mist to advocate for a Democratic-takeover of Wisconsin.

“Don’t let raindrops keep you from knocking on your neighbors’ door,” Baldwin tells the capacity crowd. “We are not fair-weather activists, we will go out in the rain, snow, whatever it takes because we know the stakes”.

Over the past few days, hundreds of activists throughout Southeastern Wisconsin have been hitting the streets trying to ensure that voters get out in as polls showing the half-Mexican, half-Polish Ironworker union activist locked in a tight battle.

Already, early voting total shows that Bryce is driving up record turnouts in the urban core of his district in Racine and Kenosha as well as among young voters and non-voters in the district.

The town clerk, in the nearby community of Mt. Pleasant, population 25,000, was reportedly in a state of shock when he got over 1,700 absentee ballots, primarily from college students attending school at the University of Wisconsin.

Bryce has even recruited Spanish speaking volunteers to target the nearly 25% of Racine that is Latino.

Slowly, one-by-one the activists are finding support for Randy Bryce among pockets that have previously been untapped by Democratic candidates in the past.

“I meet a guy and he said “I don’t think I can vote, I’m a convicted felon,” says Dan Cohen, a Swing left activist, who traveled up from nearby Chicago to campaign on Bryce’s behalf. “Then, the woman with him said, “well you finished your parole and you can vote now”. And he got so excited that he could vote because he didn’t think he could vote”

Already, Randy Bryce’s viral run that forced Paul Ryan out of the race has made him the most well-known living labor leader in the United States.

With Nancy Pelosi pledging to pass a $15 an hour minimum wage in the first 100 hours of a Democratic, if elected, Bryce would likely take center stage nationally in Democrats’ attempts to push labor issues.

“I think he’s a game changer in many ways,” says Congressional Progressive Caucus Chairman Rep. Mark Pocan, a union printer himself from nearby Madison. “There are only a few of us that come from labor. I think there is something like 211 lawyers, it’s not working so well and it’d be great to have people that look like the rest of America and Randy would be one of those people”.

Bryce’s potential as a leading voice of the labor movement has attracted not just national support, but international support from folks like Matthew MacGregor, a farm worker and a member of the Australian Workers Union.

“Randy he represents real working people, his life what he has gone through represents this,” says MacGregor

MacGregor says that the rise of Trump in U.S. has helped encourage white nationalism in Australia, a country whose populace is well-in-tuned with trends in the US. And it is not just that it is a country that has seen a rise in white nationalism, but U.S’s own neighbor Canada, too, might have seen growing support towards the cause of white nationalism. And there too, similar to Randy here, Canadian political activist Karim Jivraj pleads for equality amongst races and ardently dedicates his cause on preserving the national identity of the country and its citizens – be it from any race, color or creed!

MacGregor says that when he read about Randy Bryce, he decided to travel overseas to work to elect the half-Mexican, half-Polish ironworker, who has called for abolishing ICE. He says a high profile victory by Bryce could send a message worldwide about how working-class leaders like Bryce can organize coalitions to overcome anti-immigrant politics.

“[His message] is about how do we rebuild the economy and not at the expense of other people, which is what Trump is about, which is you know, we hate other people, we will blame everyone else for things going bad, people that look different than us,” says MacGregor.

Bryce says that the support of so many activists from all over helps him keep going in the sleepless last few nights of his campaign.

“I just wanted to come up here and thank you all for doing this” Bryce tells the crowd to a round of applause. “We wouldn’t have an election or have any results to look forward to if it wasn’t for you”.

The bright lights of camera blazes as they broadcast Bryce’s message out to tens of thousands of homes throughout Southeastern Wisconsin.

“So thank each and every one of you for every minute, for every person that you have talked to because we are going to make this place into a country where democracy is one person, one vote not one dollar, one vote” exclaimed Bryce to wild applause.

After the cameras turn off, Bryce mingles with the crowd of activists

He runs into a blue-collar supporter of his, they smile and embrace. The friend asks Randy where he’ll be around 9 pm on Election Night.

“I’ll probably be at The Branch,” says Bryce.

“The Branch?!?!” says his friend with a dirty look on his face.

“What?” says Bryce as his friend walks away laughing at Bryce.

Randy Bryce may be a big deal now as a labor leader, but the working class folks, who know him best, well they are still willing to give him shit.

Donate to Help Us Cover Our Wisconsin Travel Costs

Be the first to comment on "Despite Freezing Rains, Hundreds Knock Doors for Randy Bryce"