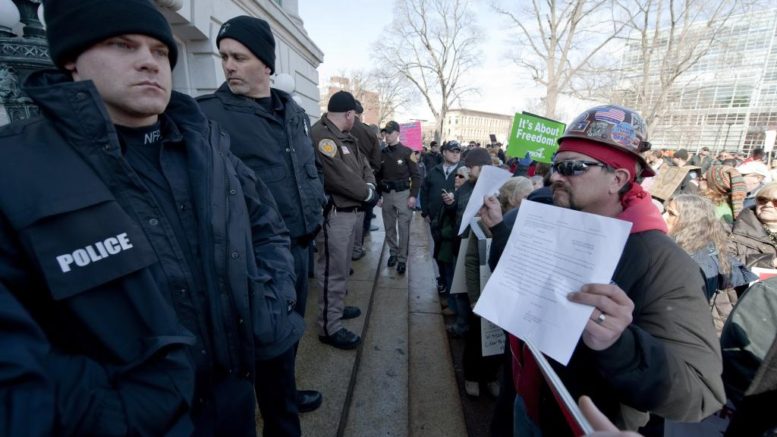 As North Carolina teachers go out on strike tomorrow, they will be joined by the ranks of the state’s construction unions. Much like teachers, who lack the right to collective bargaining in the state, construction workers employed on North Carolina’s state-funded projects, such as schools, lack the ability to have their wages set by union-endorsed prevailing wage standards.

They say the lack of collective bargaining rights for public employees in North Carolina is symptomatic of how the state also undervalues all workers employed on projects financed on the public’s dime.

“When your public employees are organized, it sets the standard and foundation for everybody else,” says North Carolina IBEW Local 379 President Scott Thrower. “When they are not, the private sector is setting the ground.”

Without a prevailing wage, contractors on state-funded projects can simply pay their workers whatever they want.

Often unionized contractors, which offer a 4-year apprentice training program, find themselves at a disadvantage in competing against the “lowest” responsible bidders– many of whose workers have only gone through bare bones 9-week community college certification programs in North Carolina and have no state standards on what they are forced to pay their workers.

“It just cuts the bottom out of construction standards; our contractors have to pay [a fair wage] scale, insurance, retirement, the total package just like it has always been,” says Thrower. “A lot of these other construction companies don’t do that. The 1099 people, they use temporary workers. We are competing against it so it cuts out a lot of employers who play by the rules out of the picture.”

“No one is training anyone because no one sticks around,” says Thrower. “It’s dangerous.”

In Arizona, construction workers also marched in solidarity with striking school teachers. According to Dean Wine, secretary-treasurer of the AFL-CIO and business manager of IBEW Local 460, some electricians on school construction sites are making as little as $12 an hour.

“We hear a lot of horror stories about electrical installations [in schools],” says Wine.

“Unions in Arizona [and elsewhere] see what happened in Wisconsin. First, they come for the public sector unions, and then they come for you,” says Randy Bryce, who, as the former political director of Ironworkers Local 8, testified against the repeal of prevailing wage in Wisconsin in 2017, nearly 6 years after the state stripped collective bargaining rights from public employees.

Since the beginning of the Great Recession, West Virginia, Wisconsin, Indiana, and Kentucky have all moved to cut prevailing wage laws while also passing legislation making their states “right-to-work” and rolling back collective bargaining rights. In 2012, Michigan also went “right-to-work” and now the state’s GOP majority is working hard to repeal prevailing wages standards.

This is due to the fact that labor costs only account for 23 percent of the total cost of most major construction projects. Moreover higher wages can lead contractors to attract higher skilled workers, who can often save companies in terms of increased productivity.

Since the late 1970s, more than 20 states have moved to repeal their prevailing wage, leading to a stagnation of construction wages as real construction wages are lower today than they were in 1970, according to an analysis conducted by the Economic Policy Institute.

“The so-called savings that results are simply a myth,” says Matt Szollosi, executive director of the Affiliated Construction Trades of Union, whose state repealed prevailing wage standards on school construction projects in 1999.

“There are no savings achieved on overall project costs, simply increases in the profit margins for contractors seeking to undercut the area’s standards of wages and benefits for working people,” says Szollosi.

Since the late 1970s, more than 20 states have moved to repeal prevailing wage laws. The resulting contrast in wages between the states couldn’t be starker

Union leaders bombarded their members with thousands of phone calls and mailers informing them of Saccone’s opposition to prevailing wage laws, contributing to Democrat Conor Lamb’s narrow 755-vote victory over Saccone in a district that previously had voted for Trump by 17 percent.

“It was easy to motivate our members because they repealed prevailing wage in [nearby] West Virginia and they understood what was at stake,” says Keystone Mountain Lakes Regional Carpenters Council union representative Mike Welsh.

Now as construction union workers mobilize around the country in solidarity with striking teachers, there is a new sense that a new energy could help not just prevent cuts to education

“We have all common causes, the attack on prevailing wage is no different than the attack on the ability to collectively bargain,” says Ashley Hawkins with IBEW Local 379. “It’s just every little bit that they can nitpick out of laws to makes it harder for workers to organize and harder for workers to get by, [they will], and we have all a common cause in fighting that.”

Donate to Payday to Help Us Keep Covering the Fight for Prevailing Wage.