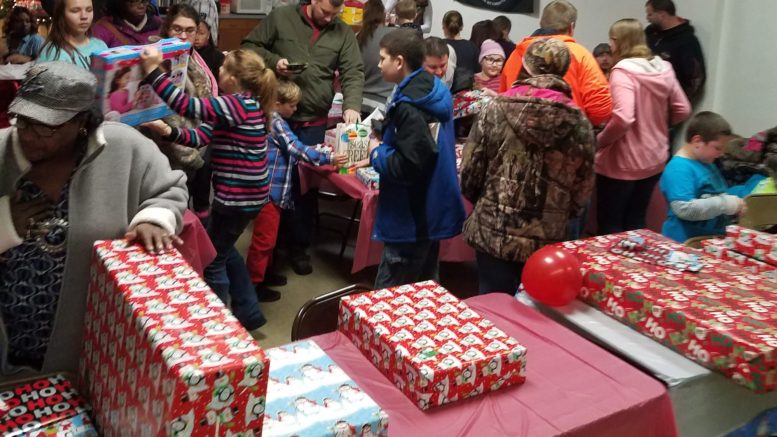 “We feel pretty forgotten,” the third generation Honeywell worker Brandon Bullerman told me on his way to picket line duty on Thursday. “There are a lot of people not showing up to the picket line anymore. They are starting to lose faith, but we’re still holding together, we’re still fighting.”

Bullerman and 316 of his fellow co-worker have been locked out from their jobs at Honeywell’s aircraft brake plant in South Bend, Indiana since last May. The workers, members of UAW Local 9, were locked out after refusing to accept a contract that would reduce wages for some workers to less than $15 an hour. The contract that Honeywell proposed also would have eliminated the ability of the union to bargain over health care costs.

The union voted down the proposed contract by a margin of nearly 3 to 1 ,but the union offered to continue working at the plant under the old contract until a new contract could be negotiated. However, the company refused to negotiate and locked them out from their jobs instead of negotiating. Federal labor law enables the Department of Defense to step in and stop the lockout since there are defense contractors, but, so far no help has come.

While President-Elect Donald Trump has tweeted out denunciations of defense contractors for cost overruns associated with producing F-35s,  he has yet to call out  Honeywell for asking the Department of Defense for reimbursements from the cost overruns of the cost of hiring and training scab replacement workers, who make brakes for the F-35 and F-18.

In fact, his Vice President-elect Mike Pence, as the Governor of Indiana, attempted to block the workers from receiving unemployment benefits. Although workers locked out from their jobs in union disputes, are entitled to unemployment benefits, Pence personally intervened to slow down the process of Indiana resident receiving the benefits; thus delaying the workers from receiving benefits for nearly two months.

It’s not just Republicans who have neglected the workers. Workers say the Obama Administration has as well.

While Indiana’s Democratic Senator Joe Donnelly has pushed for a federal investigation into Honeywell, the Obama Administration has remained silent. Despite the fact that Honeywell is a major federal defense contractor that received $4 billion in contracts in the last year, the federal government has so far refused to step in to stop Honeywell. Indeed in September, workers were outraged when the Navy renewed a $18.3 million contract to make brake pads for the F-18 despite protests from the union.

Believing that Honeywell could bust the union, the union says that the company has even refused to alter the proposal that the union voted down last May. In late November, the worker’s unemployment benefits expired. Subsisting on a meager $200 a week in lockout benefits from the UAW, many workers have been forced to take out loans and max out their credit cards and take side jobs to stay afloat.

Thinking that the desperation of being broke in the holiday season could break the workers, Honeywell had workers vote on the contract again. The union stuck together and voted it down by a margin of 82- 184. Despite the vote for continuing to resist the company, many sensed that workers were starting to break.

“It’s been tough, it’s wearing on people,” says UAW Local 9 Vice President Todd Tredder, a father of three. “It’s one thing to say you are going to go out and fight. However, when you are in the middle of it, it’s a whole ‘nother ball game.:

“It’s especially tough coming into Christmas knowing you have children, knowing you don’t have money, and knowing somehow that you gotta make it a decent Christmas,” says Tredder.

Workers from around South Bend hadn’t forgotten about the locked out Honeywell workers. Workers from unions from around the region started organizing food pantries and gift drives to help the workers get through the holiday season.

Reverend Sylvester Williams Jr. even worked with local radio station WUBS to raise money to buy turkeys for the locked out workers. The response was so overwhelming that they were able to buy 200 turkeys.

“I go down to the union hall just about every day, and we will get an envelope from someone sending in money to help,” says Tredder. “It’s just overwhelming the support we have been getting.”

Ford workers from UAW Local 551 and GM workers from UAW Local 2209 and Local 5 pooled their money to purchase Christmas gifts for 72 children, whose parents were having trouble affording gifts. On Thursday, the union members even threw a special party at the union hall to present the children with the gifts donated by UAW members across the Midwest.

“It’s not the Christmas I had last year by no means,” says Tredder. “I had to scale back on gift buying and going on vacation like we normally do, but it’s still is gonna be Christmas.”

Workers say that what they may lack gifts under the Christmas tree this year, they have made up for in other ways

“Truthfully, the whole thing has brought my family closer together. At first, my wife and I had some tough times and some tensions because of money,” says Bryan Rodgers, a father of three, “but it brought us closer together. We had to because otherwise the company wins and tears us further apart.”

“We hope that what we are doing here may serve as a blueprint for how [we] can pull together,” says Rodgers.

Mike Elk is a Sidney award winner and a member of the Washington-Baltimore NewsGuild. He previously served as senior labor reporter at POLITICO, a workplace safety expert at MSNBC, and as an investigative reporter at In These Times Magazine. In 2015, using his NLRB settlement from being illegally fired for union organizing at POLITICO, he founded Payday Report in Chattanooga, Tennessee.