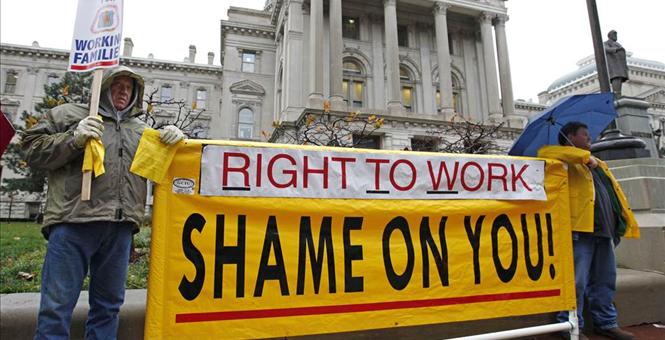 Payday has learned that the Kentucky State Legislature is poised to pass “right-to-work” as soon as this week.The measure would change Kentucky law to allow workers to receive the benefit of union contracts without being legally obligated to pay dues for such representation.

Signifying the importance to the GOP of crushing organized labor in Kentucky this session, Kentucky State House Republicans have marked the legislation as “House Bill 1”. The measure is set to be voted on by the House Committee on Labor & Industry tomorrow. The bill could then be voted later in the week by both houses and could pass as soon as this week before the part-time state legislature adjourns for the month.

“They are obviously rushing this legislation so that folks don’t really have the opportunity to respond effectively and contact their legislators,” Kentucky AFL-CIO President Bill Londrigan said in an exclusive interview with Payday.

Kentucky is the last state in the South not to have ‘“right-to-work” as law.  According to the Bureau of Labor Statistics, Kentucky has over 187,000 union members.

Last year, Republicans regained control of the Kentucky State House for the first time in 95 years. As a result of the Trump wave, Republicans now maintain a 64 to 36 majority in the State House. Under proposed “right-to-work” legislation, unions in Kentucky could lose tens of thousands of dues-paying members; thus denying Democrats the financial support needed to take back the State House.

Labor activists say that it’s not a coincidence that the first piece of legislation Republicans will attempt to pass is “right-to-work.”

“Obviously, they wanna tie our heads behind our back so that it’s difficult to fight back against their radical agenda,” says Londrigan.

In addition to passing “right-to-work,” the Kentucky State Senate has signaled that they plan to move forward on passing a bill, which would deny unions the right to have dues deducted automatically from workers’ paychecks. Without automatic dues deductions, unions would be forced to organize elaborate plans to collect dues manually off of individual members to stay afloat financially. The plans could take months to assemble and could further hamper the ability of organized labor to fight back.

“The Kentucky AFL-CIO doesn’t think the plan is legal [under federal labor law]” says Longridan. However, Londrigan notes that it would take the union months, if not years, to fight the legislation in federal court; hampering the labor movement in Kentucky even further.

“It’s a ploy to try to weaken our financial ability to represent our workers,” Londrigan said of the measures. “It’s totally wrongheaded policy. It’s gonna lead to low wages for all of Kentucky’s workers.”

Mike Elk is a Sidney award winner and a member of the Washington-Baltimore NewsGuild. He previously served as senior labor reporter at POLITICO, a workplace safety expert at MSNBC, and as an investigative reporter at In These Times Magazine. In 2015, Elk was illegally fired for union organizing at POLITICO and used his NLRB settlement to found Payday Report in Chattanooga, Tennessee.

Be the first to comment on "BREAKING: Kentucky Expected to Pass “Right-to-Work” This Week"