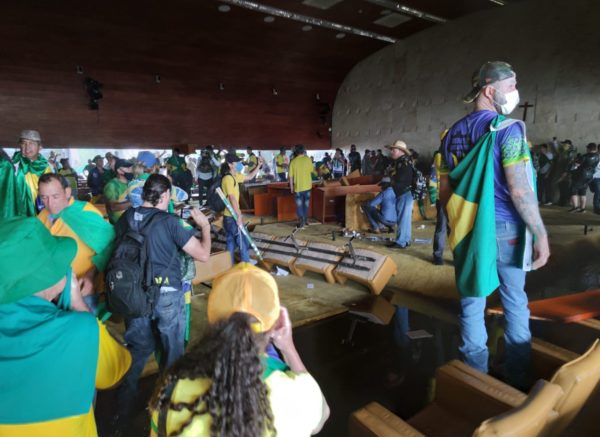 Greetings from the Burgh, where former National League Most Valuable Player Andrew McCutchen has returned to play for the hometown Pittsburg Pirates. With the offseason additions of pitcher Rich Hill and 1st baseman Carlos Santana, this could be one of the best Pirates teams in a long time.

Sorry for being off this week sick, but we are gonna use this week’s newsletter to get caught up on some of the things happening this week.

Torres, who fled to Orlando before the attack on the National Congress, previously served as the Minister of Justice in Bolsonaro’s government before becoming the Secretary of Security in Brasília at the beginning of January.  Earlier this week, federal police found a draft of a plan to overthrow the presidential election results in Brazil.

Now, Rocha has accused Torres of hiding military intelligence from him, which showed that an attack on Brazil’s Congress was likely.

“The fact that [Torres] was out of Brazil, on that critical day, shattered my confidence. That’s why I fired him,” Rocha told the Federal Police in testimony.

In his testimony, Rocha also said that Brazilian army officers repeatedly blocked his attempts to remove encampments of Bolsonaro supporters that were becoming a security threat in the city.

For more, check out CNN Brasil.

Donate to Help Us Cover Threats Against Brazilian Democracy

While most media outlets have ignored the election, Payday was on-the-ground providing over 20 updates during the election in Brasil this past fall. As American trade unionists that we pay attention to the fight against fascism in the world’s 4th largest democracy.

Donate to help us keep providing regular updates on Brazil. Please, if you can, sign up as one of our 738 recurring donors today.

In Iowa and Wisconsin, over 1,000 Case New Holland farm equipment workers, and members of the UAW, have been on strike for nearly 8 months. Workers the are upset about cuts to wages, health care, and seniority.

Last weekend, they voted down a proposal to accep the contract by a margin of 55%-45%. Workers say that while the proposal is improved that it is still now what they want. Many workers are upset that scab replacement workers are currently making more than they would under the proposed contract.

“They’re paying their non-union (employees) $27 per hour, today,” Yasin Mahdi, president of UAW Local 180, told the Milwaukee Journal-Sentinel. “I don’t know what the problem is with paying us the same thing.”

For more, check out the Milwaukee Journal-Sentinel.

“We have families. We live here in Loudoun County. We cannot afford to live here any longer,” Sandra Vigil told WRC.  “I know we’re out here, and we’ve stranded our passengers. This is not something we wanted to do. We were forced to do this.”

For more, check out WRC.

Alright folks, thats all for today. Donate to help us keep covering workers in the US and overseas. Please, if you can sign up as one of our 738 recurring donors today.

Keep sending tips, story ideas, complaints, and comments to [email protected]. Thanks for all your idea and support.