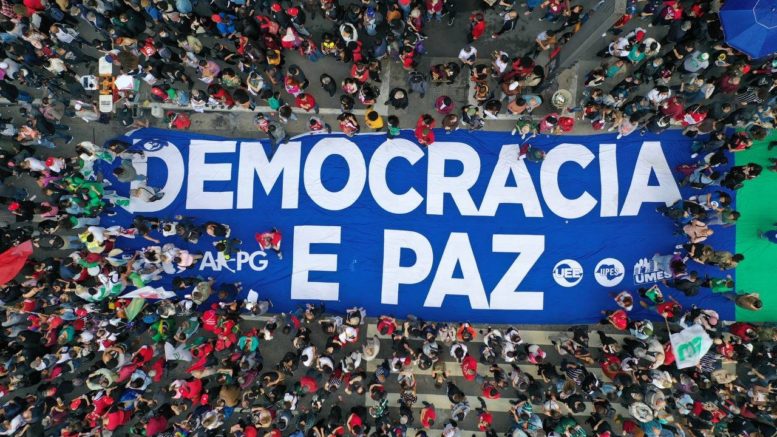 Greetings from Pittsburgh, where I have been battling the flu but keeping abreast from my bed of the many developments in Brazil. I am getting more sick, but still updating on Twitter when I can.

Please donate to our paid sick day fund in case I have to take a few days off.

Rallies in Major Cities Across Brazil

Across Brazil, supporters in every major city and many small towns held rallies Today to show support for Lula and democracy in Brazil.

“We are in a state of permanent vigilance in defense of democracy,” tweeted São Paulo State Representative Guilherme Cortez. “Today we take to the streets in dozens of cities and send out a message: we will not tolerate amnesty for those who threaten our democracy. Only our mobilization will ensure that they do not advance even one millimeter.”

For photos and videos from rallies around Brazil and translations from Portuguese, check out my Twitter feed @MikeElk

While Bolsonaro supporters attacked the Brazilian Congress in Brasília yesterday, Bolsonaro was spotted holding a small rally in Orlando, the cul-de-sac where he was staying.

Two days before Bolsonaro’s term expired, he fled the country for Orlando. His decision to flee came as many expected him to face criminal charges in Brazil.

When Bolsonaro entered the country, he is thought to have done so on a diplomatic A-1 visa as the sitting President of Brazil. However, now that he is no longer President, an A-1 visa is no longer valid, and it remains to be seen whether Bolsonaro will be able to stay in the United States.

“If an A visa holder is no longer engaged in official business on behalf of that government, it is incumbent on that visa holder to depart the U.S., or to request a change to another immigration status within 30 days,” State Department spokesperson Ned Price told reporters on Monday. “If an individual has no basis on which to be in the United States, an individual is subject to removal by the Department of Homeland Security.”

Over 1,500 Were Arrested in Brasília

In Brasília, over 1,500 Bolsonaro supporters who participated in attacks on Congress yesterday have been arrested.

Justice Minister Flavio Dino says that funders of bus and travel for the participants have been identified in 10 different states. Many of them the groups are linked to big agribusiness. Lula has long supported agrarian reform and the Landless Workers Movement and pledged to battle these big business interests once again.

“Whoever did this will be found and punished. Democracy guarantees the right to free expression, but it also requires people to respect institutions,” Lula tweeted. “There is no precedent in the history of the country what they did today. For that they must be punished.”

In a powerful display of support, Lula led a delegation of Senators, Governors, Supreme Court Justices, and members of Congress from all parties in a march to reclaim Brazil’s Congress (see the full video here).

Check out a full video of the damage and destruction done by Lula’s official photographer Ricardo Stucker.

Alright, that’s all for today, folks. I’m going to get back in bed sick. Donate to our sick fund so I can take a few days off. Please, sign up as one of our 739 recurring donors Today.

Be the first to comment on "1,500 Arrested in Brazil – US Signals Bolsonaro’s Visa Invalid – Biden Invites Lula to White House"