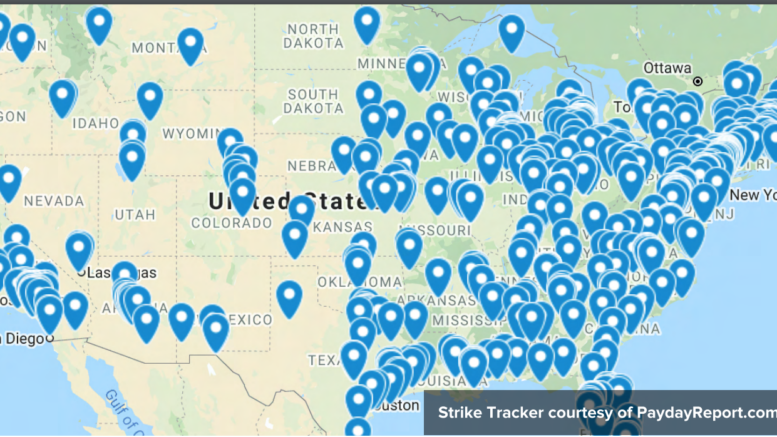 Update: Cornell’s Labor Action Tracker listed 370 strikes in 2021, but in a press release the group claims that they tracked 260 strikes

Today the Bureau of Labor Statistics released its data showing only 16 major work stoppages in the U.S. in 2021.

The difference in strike totals should be troubling for labor observers, and it’s hardly the first time the difference in strikes has been so stark. Last year, while the BLS counted only 8 “major work stoppages” using their tracker, Payday Report’s Strike Tracker showed at least 567 walkouts, a decrease from 1,200 walkouts tracked in 2020.

So why the difference?

The BLS uses an outdated system that only recognizes work stoppages at employers with 1,000 or more workers and where actions “must last at least one shift during the week, Monday through Friday, excluding Federal holidays.”

Thanks to an era of subcontracting and outsourcing to temp agencies and automation reducing the number of manufacturing workers needed to run a plant, most workers are now employed in workplaces with less than a few hundred people.

However, the BLS still relies on using a tracking model first developed 40 years ago in 1982 when steel mills and auto plants regularly employed thousands of people in this country.

As a result, we believe the BLS undercounted the number of walkouts and strikes by more than 500 this year.

This stark difference between how the BLS and Payday Report’s Strike Tracker counts walkouts further raises questions about the BLS’s outdated models to measure worker action.

Payday Report’s Strike Tracker mainly consists of counting news reports of strikes. However, during the pandemic, many strikes and walkouts aren’t being covered because there aren’t enough reporters to cover them, leading us to believe that even our count underestimates the true size of the strike wave.

By undercounting these strikes, the BLS makes it harder for experts, journalists, and political leaders to speak about worker frustration in the country because the precise number of strikes is unknown.

Often, union organizers use the number of workers striking elsewhere to inspire more workers to strike. For example, during the 2018 teachers’ strikes, Payday showed how a series of statewide strikes that began in West Virginia in 2018 quickly spread to Oklahoma, Arizona, North Carolina, and Kentucky.

Like those teachers’ strikes, workers are more likely to take action if they can easily see other workers taking action. But by undercounting strikes, we fail to show the massive surge of support for workers’ rights sweeping the country.

The BLS is not the only group using strike tracking models that depend on an outdated definition of strikes happening in the pre-digital age. Cornell’s Labor Action Tracker counted 260 strikes in 2021, almost less than half the number of strikes that Payday Report had counted. In this case, Cornell’s model only counts a strike when workers engage in traditional union strikes.

(You can read Cornell’s full methodology here and why they don’t count non-traditional, nonunion walkouts in their calculation.)

However, in an era where only 10.3% of workers belong to unions, according to the BLS, many workers are simply walking out without the help of unions. With employers running sophisticated anti-union campaigns, like the one at Amazon in Alabama last year that successfully  used psychological intimidation and frequent illegal intimidation, the idea of joining a union is beyond reach for many workers.

Instead workers, often in nonunion workplaces, are taking action spontaneously and coordinating online to walk out over concerns about COVID, or in solidarity with the Black Lives Matter movement, or against sexual harassment of co-workers, or against understaffing and a lack of respect on the job as we’ve seen in the past few months.

In June of 2020, Payday Report warned in a piece, “How Black and Brown Workers are Redefining Strikes in the Digital Covid Age,” that many in the left press, union bureaucracy, and government institutions failed to understand worker outrage. Likewise, the BLS and Cornell models hurt our ability to cover workers’ actions and fail to present an accurate picture of workers’ movements.

Using Payday Report’s Strike Tracker, Pulitzer Prize-winning reporter Greg Jaffe of The Washington Post wrote the widely praised story “It’s a Walkout!” showing how a group of nonunion workers striked at McDonald’s in rural Bradford, Pennsylvania. The November 2021 report, which was featured on the front page of The Washington Post, showed how workers, despite being nonunion, still planned and engaged in collective action.

(For a full in-depth statistical look at what caused the mass exodus from jobs, see The American Prospect’s David Dayen’s “The Great Escape.”)

These strikes prompted the former U.S. Secretary of Labor Robert Reich in October to call this mass wave of resignations an “unofficial general strike.”

As University of Wyoming professor Mike Duff argued in the St. Louis University Law Review, with the rise of the gig economy, digital organizing culture, and increasingly non-union workforce, the nature of workplace actions is changing.

“The labor movement has a once-in-a-generation opportunity to organize and if we don’t understand how workers are organizing then it will be difficult for us to organize them,” Duff told Payday Report.

Groups like the Economic Policy Institute have also called on the Bureau of Labor Statistics to update their model.

“Resources should be directed to BLS to allow more comprehensive tracking of work stoppages. Without comprehensive data on work stoppages, policymakers lack the information necessary to adequately address the needs of workers in the United States,” wrote EPI in their analysis of BLS’s 2021 release.

Workers are striking in unprecedented numbers, and they deserve an accurate picture of their numbers. Workers are changing how they organize strikes, and it’s time that institutions like the Bureau of Labor Statistics and Cornell’s Labor Action Tracker change how they count strikes, too.

Donate to Help Us Continue Track Strikes in 2022.