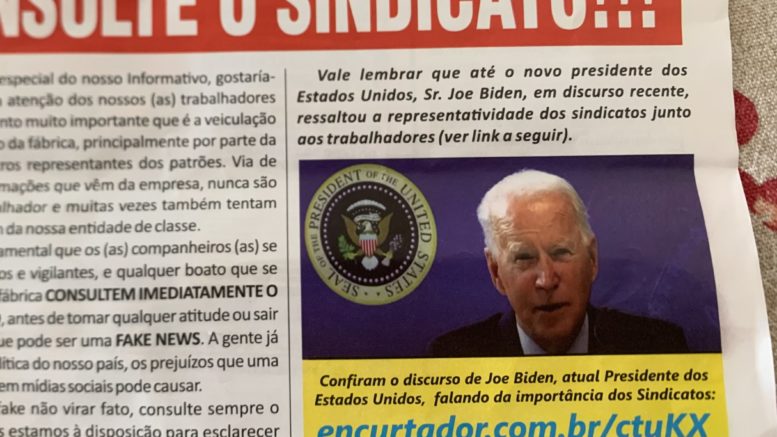 SÃO PAULO, BRASIL – On the front cover of São Paulo’s April 2021 tire workers union newsletter is a photo of President Joe Biden speaking out in support of workers seeking to unionize at Amazon in Alabama.

The speech was widely hailed as a historic move in the United States, but it was also widely promoted by Brazilian labor leaders to their union members who have been facing anti-union attacks by right-wing Brazilian President Jair Bolsonaro.

“It’s worth remembering when the new president of the United States, Joe Biden, in a recent discourse reasserted the importance of unions,” reads the cover article on the Sintrabor newsletter, encouraging union members to watch it for themselves on their website.

Now Brazilian trade union leaders are calling for international solidarity as they prepare to take on the threat of a potential coup in the Western Hemisphere’s second largest democracy with over 210 million people.

“Bolsonaro has been going after unions so hard. He’s been blaming unions for Brazil’s economic problems,” said Rubens Fernandez Silva, the Secretary General of the São Paulo hotel workers union Sinthoresp. “It’s very powerful when the leader of the most powerful country in the world speaks out in favor of unions.”

During the pandemic, the U.S. saw an unprecedented strike wave, with workers participating in more than 2,300 strikes between March 2020 to October 2022, according to Payday Report’s Strike Tracker. The strike wave was followed by a rapid increase in organizing campaigns, with a 58% increase in union elections in 2022 compared to 2021, according to the NLRB.

A Gallup opinion poll this year also showed 71% of Americans approve of unions, so it would be a popular political move for President Biden and others to get behind unions in a way that Democrats hadn’t in recent decades.

However, during the pandemic in Brasil, unions faced their gravest crisis since the military dictatorship fell in 1985. Bolsonaro ruled back key workplace rights and raised the minimum retirement age by several years for many categories of workers. He also eliminated key funds that led to an unprecedented crisis in the Brazilian labor movement.

“Some unions lost 40% of their budget when this was cut. Some small unions just simply disappeared,” said Ruth Coelho Monteiro, director of human rights of the 2.1-million-member Brazilian trade union federation  Força Sindical.

While facing brutal attacks, many Brazilian union leaders began regularly updating their members in social media posts and newsletters on the battle of Biden against Trump in 2020 to provide a positive example of how workers could defeat fascism.

In the 1980s, as Lula and other unions led strikes in Brazil against the dictatorship, the Brazilian trade union movement established extensive solidarity abroad. Groups like the UAW sent staff and financial support to bolster union and pro-democracy movements in Brazil. The UAW even made Lula an honorary member at their union convention in 2013.

“Lula is a citizen who doesn’t just think of Brazil, but of the world as whole,” said Brazilian fashion workers union CNRTV President Cida Trajano. “He has always had a deep vision of global social movements.”

In the early 2000s, when George W. Bush was president for eight years, some trade union leaders in the U.S. were excited to see Lula’s 2002 victory in Brasil as unions in the U.S. were getting battered by Bush.

After Obama took office in 2009, he made Lula his first official state guest in honor of his global leadership. He described him as the “most popular politician in the world.”

Like Trump, Ferreira said they had to constantly battle against the issue of “Fake News” with their members. And while hate crimes rose dramatically under Trump, political violence also soared under Bolsonaro, with a 23% increase in gun violence this year.

Previously, guns had been heavily restricted in Brasil. However, Bolsonaro has passed a dozen different laws that loosened gun restrictions in Brazil. Since Bolsonaro became president, the number of guns owned by private citizens doubled to 2 million, according to data from Brasil’s army and police analyzed by the Brazilian security think tank Sou da Paz.

Bolsonaro gun laws interestingly stipulate that people must join a local gun club to be able to purchase guns. More than 2,000 of these gun clubs are now operating around Brasil.

And who runs these gun clubs?

“It’s Bolsonaro supporters of militias,” said Monteiro, describing militias run by former policemen who claim they are protecting neighborhoods from drug traffickers but often engage in the same practices themselves.  “The militias were already bad in places like Rio de Janeiro. Even if Lula wins, these militias are a problem that we are going to have to deal with for a long time to come.”

Nearly 70% of Brazilians say that they are scared of political violence, according to one poll by DataFolha.

In a recent Datafolha poll, 14% of respondents said they had been verbally threatened for their political views with 5% saying they have been physically threatened. The same poll revealed 46% of Brazilians said they no longer discuss politics with their friends or relatives.

“Brazilians have always been a friendly, nice, happy people, but now we have this new politics of hatred that has really created divisions,” said Silva.

While violence soared, Bolsonaro spread disinformation about COVID and refused the COVID vaccine himself, contributing to over 680,000 COVID deaths in Brazil.

However, Brazilian unions, many of whom operate their own health clinics for their members, fought back and led campaigns to get their members vaccinated. The widespread pro-vaccine campaigns from unions and other groups in Brazil helped get 94% of Brazilian in favor of the vaccine, according to one poll by Folha de São Paulo.

Now, union leaders are hoping they can have similar success in getting people to vote against Bolsonaro. Polls show that Lula is leading widely by more than 10% and could even pull off a victory in the first round of today’s election.

While Lula may win, he will unlikely have a big governing coalition in Congress and whatever agenda he proposes will likely be thwarted. However, labor leaders in Brasil know that Lula winning is only the first step in the election.

“We are going to have to continue talking to our members and opening space,” said Ferreira. “This is just one battle in a  war against fascism.”

Donate to Help us Cover the Fight Against Fascism in Brasil