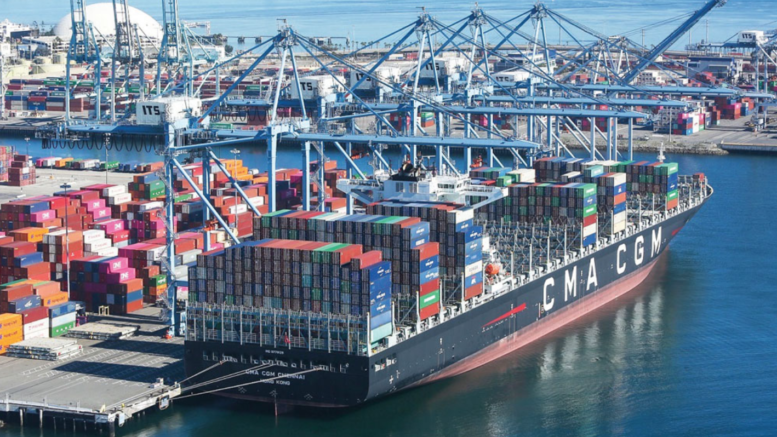 For Jaime Hipsher, the sounds and sights of men and women busy driving trucks and hauling metal containers along the San Pedro Bay mean everything to her. The third-generation dockworker, who drives utility tractor rigs to transport containers around the port, joined the docks in 2004.

“My father was a longshoreman…This is a generational job,” the 46-year-old said. “I dedicated everything to [being a dockworker].”

For the first 11 years, she was a casual worker, the rank where most dockworkers start out. They are considered part-time workers who are not guaranteed any shifts. They have to wait for whatever jobs are left after the full-time workers pick their shifts, do not receive benefits, and earn a lower starting hourly pay than their registered counterparts. Hipsher had to work other jobs, like bartending and selling clothes at flea markets, to make ends meet.

“I really wanted to dedicate myself to work,” Hipsher said, adding that her “personal choice” not to get married or have children was because of her passion to work on the docks. “I just simply couldn’t do both.”

Finally, in 2015, she earned enough hours to become a registered longshore worker, giving her much better wages and job security. But that is all under threat now.

A new study titled “Someone Else’s Ocean” underwritten by the International Longshore and Warehouse Union (ILWU) — the union that represents 22,000 dock workers on the West Coast, from Bellingham to San Diego — found that the 13,000 dockworkers in Los Angeles and Long Beach, whose average age is 50 with three-quarters being male, earn $1.2 billion a year through their work.

What these dockworkers spend fuels the economy in the surrounding communities. They provide Southern California with 7,000 year-round jobs, $450 million in wages, $1.4 billion in sales, and add more than $860 million in value to California’s economy annually, the Los Angeles-based Economic Roundtable found.

“We all have friends with businesses here. We spend a lot of time patronizing businesses here, buying homes here. We shop at the local grocery stores; we pay taxes here. We keep the community going,” said Hipsher, who has six siblings and 13 nieces and nephews.

“If you drive through this town of San Pedro, you will see a sign that says we support the ILWU in almost every single business,” says Hipsher. “The port jobs have created a complete family community that has been around for generations…and that has created great opportunities around the whole region.”

But a large chunk of the money and jobs could vanish if both the Los Angeles and Long Beach ports, which together account for 40% of U.S. seaborne imports,  become even more automated. Shipping companies, which lease the terminals from the ports, have long pushed for going high-tech, such as using cranes and trucks that can run on their own, to cut labor costs. While these moves improve corporate profits, they leave workers like Hipsher in economic chaos.

Automation at Center of Contract Dispute

Automation is at the center of a dispute between the longshore workers and the leasing companies. On Thursday, the contract between the dock workers and the shipping companies expired, setting up a battle that could shut down the ports. The battle could also force President Joe Biden, who brags of being the “most pro-union president in history,”  into the middle of a high-stakes battle between the Pacific Maritime Association (PMA), which represents the terminal operators, and the ILWU.

The terminal operators are continuing to demand concessions from the unions, claiming this will lift the entire San Pedro community by making the ports more competitive. These carriers, most of them foreign-owned, made a record $190 billion in profit in 2021, over seven times what they made in 2020. They are projected to rake in another $200 billion this year, as they continue to take advantage of the supply chain snafus to increase shipping rates, which hit a record $20,000 per 40-foot box shipped from China to the West Coast last August, and are still around the $9,000 mark. Before the pandemic, they were below $2,000.

Both parties have not made the discussions public, and in a June 14 statement, said that neither party will strike or conduct a lockout.

“If the employers and these corporations could replace us all with robots, they would,” Hipsher said.

Besides job losses, automation is a national cybersecurity risk “as it places our ports at risk of being hacked as other automated ports have experienced,” the ILWU president Willie Adams wrote in an open letter on Facebook posted in May. “These attempts should be a concern for our nation as the intention behind them isn’t what’s best for America, but rather what’s best for foreign profits.”

Shipping companies and their supporters claim that automation will improve efficiency and bring goods to consumers more quickly. And they point to a World Bank survey to show what poor performers the San Pedro Bay ports are — it ranked the two ports as the most inefficient globally last year in terms of how quickly cargo ships dock and leave the port.

The Social Fabrices of the Docks

Daniel Flaming, the Economic Roundtable’s president and one of the study’s co-authors, said that getting goods to consumers is more than just unloading containers from ships.

“Container logistics … involve the entire inland goods movement network, including trucks, rail lines, intermodal facilities, and warehouses. That network on the entire West Coast was overwhelmed by the growth of imports in 2021,” he said.

For example, the port of Long Beach tried to operate around-the-clock last year, but there were not enough trucks arriving. Truck drivers have been in short supply due to the industry’s low pay and poor working conditions.

Even then, a technologically advanced port only benefits the shipping giants that lease the port terminals, Flaming said. “Ports are part of the social, economic and environmental fabric of our communities…The biggest remaining benefit in the San Pedro Bay is jobs on the docks.”

While the average registered longshore worker earned around $64 an hour in 2021, the Economic Roundtable report showed, casual workers only made around $47 per hour. With automation there would be even fewer port jobs available, making it more difficult for casual dock workers to accumulate enough hours to become registered longshore workers. And wages “have not necessarily kept up with inflation” in general, said Hipsher. The U.S. inflation rate hit 8.6% in May.

A 10% increase in wages of dockworkers across the West Coast would cost only $400 million, just over a quarter of 1% of the shipping industry’s profits last year, the Los Angeles Times reported.

Studies have also shown productivity actually dropped at automated port terminals. Furthermore, their operating expenditure did not fall as much as expected because of the immense capital costs involved.

Yet, at least two out of 13 terminals at the two San Pedro Bay ports are already automated, with another on its way. The Economic Roundtable report found that the equivalent of 572 full-time port jobs and $42 million in wages were eliminated annually in 2020 and 2021 as a result of two automated ports. In turn, another 254 full-time jobs and $16 million in income were cut from the state’s economy. They predict that thousands more jobs and hundreds of millions of dollars will disappear if dockworkers’ hours are lost to automation.

“I’m not just afraid for myself. I’m afraid for everybody that relies on the waterfront,” said Jimmy Monti, a 44-year-old crane operator and ILWU member who grew up in the San Pedro Bay area.

Donate to Help us Cover the West Coast Port Struggle

Be the first to comment on "As West Coast Port Talk Heat Up, Many Communities Fear Declining with Automation"