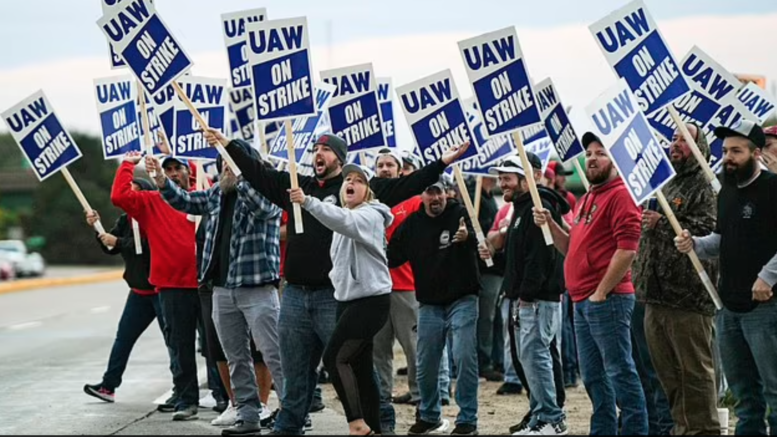 John Deere workers strike in Davenport, Iowa after voting down a proposed agreement backed by their union leadership (AP)

Earlier this week, Payday’s Strike Tracker documented its 1,600th work stoppage since the pandemic began in March of 2020.

For more than a year, Payday has documented how the media, and even some in the left press, was ignoring the massive uptick of spontaneous walkouts across the country.

While many in the mainstream media ignored the scale of the uprisings, some have now dubbed this October “Striketober.”

In Iowa, Illinois, and Kansas, 10,000 John Deere workers (members of UAW) have gone on strikes while 1,400 Kellogg workers are on strike in states across the country. And nearly every day, retail workers across the country are spontaneously walking out and going viral with the applause of social media fans.

Now we believe that this strike wave — which Payday first began documenting in March of 2020 — will get even bigger.

This Sunday night at midnight, 60,000 film production workers are set to begin the first film industry-wide strike in the history of Hollywood.

Celebrities such as Kerry Washington, Seth Rogen, and Samuel L. Jackson are weighing in with messages of support.

Film production workers, members of IATSE, are saying no to forced overtime that would routinely require them to work 14 to 16 hour days. They are also striking over provisions that allow streaming services to pay lesser rates than traditional studios.

Tomorrow at midnight, IATSE members are prepared to go out on a strike that will shut down Hollywood and likely rally massive public support.

Thanks to our readers who have helped raise more than $1,300 this past month, Payday is on the ground today in Los Angeles, knowing that this strike in Hollywood will shine a national spotlight and help connect the strike here in Hollywood to strikes happening elsewhere.

After covering the strike here, we intend to get back to Pittsburgh to see the ripple effect and travel throughout the Rust Belt. We want to connect the struggles between Hollywood and America’s Heartland and show this strike wave is growing.

But to do this, we need to update our Strike Tracker.

Right now, we want to improve our strike tracker and include heat maps as they would show when activity is picking up in a certain region and help organizers and journalists alike recognize when something big is about to happen.

We also want to build a travel fund to go out and cover these battles happening in Hollywood and the Heartland.

We want to improve the Strike Tracker, but we need your support.

Payday was the first outlet to map and track the strike movement, documenting more than 1,600 strikes since the beginning of the pandemic.

Boots Riley, who directed the film “Sorry to Bother You,” extensively praised our work in noting the strike wave when few people did.

“You could count on one hand the number of outlets, whether they’re mainstream or radical that pushed this fact,” Riley said of our work tracking more than 1,600 strikes since the beginning of the pandemic.

Our work has had an enormous impact everywhere, with NPR to The Economist to The Washington Post citing our work. Just this month, Esquire called our work tracking the strike wave “invaluable.”

Now, as the IATSE strike looms ahead, we think things are really heating up, and we are determined to get out there in the field to see what’s happening.

Donate Today to Help Us Cover the IATSE Strike and Cover the Strike Wave Throughout the Rust Belt.

Or join our 625 recurring donors to help us keep going.

Be the first to comment on "As Hollywood & America’s Heartland Strike, Payday Documents 1,600th Strike Since March 2020"