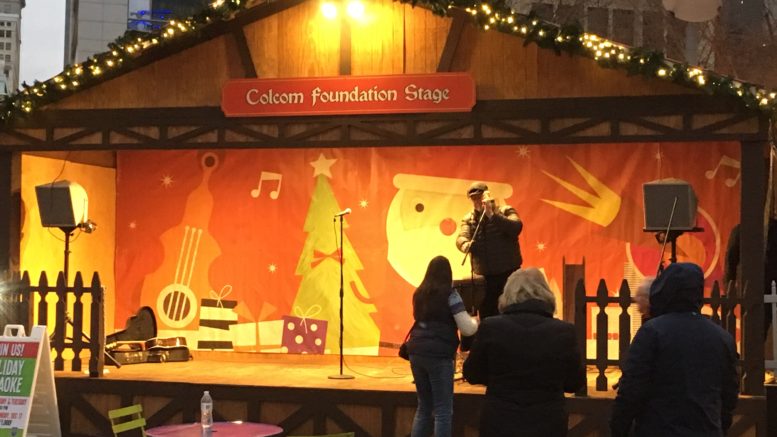 Pittsburgh Official Holiday Celebration and Market is being sponsored by Colcom Foundation, one of the largest funders of anti-immigrant groups in the country.

PITTSBURGH, PA. – In October, a gunman attacked the Tree of Life Synagogue killing 11 Jews. The gunman stated that he attacked the synagogue because of the worshippers’ support of the Hebrew Immigrant Aid Society (HIAS).

The anti-immigrant rhetoric led many in the Pittsburgh community to rally behind the cause of immigrant rights. All over Pittsburgh, placards have appeared with the phrase “Stronger than Hate” and the regional supermarket chain Giant Eagle has posted signs on its establishments reading “#LoveThyNeighbor #Noexception.”

While many in the Pittsburgh community has rallied behind the cause of immigrant rights, the Pittsburgh Downtown Partnership is still allowing a prominent anti-immigrant group, the Colcom Foundation, to sponsor Pittsburgh’s Downtown Holiday Market.

The Colcom Foundation, founded by the family of right-wing banking and publishing heir Richard Mellon Scaife, is one of the largest funders of anti-immigration groups in the country.

According to IRS documents obtained by Payday Report, in 2016 alone, the group gave $19.4 million to a variety of anti-immigration groups including American Border Patrol, the right-wing nativist Center for Immigration Studies (CIS), and the Federation for American Immigration Reform (FAIR). The Southern Poverty Law Center has designated all three organizations all as “hate groups”

For years, these groups have played a key role in giving pseudo-intellectual cover to right-wing nativist movements and funding gatherings of anti-immigrant zealots.

In 2016, 58% of the $33.5 million that Colcom gave out went to anti-immigrant groups according to IRS documents.

In addition to their anti-immigrant work, the Pittsburgh-based Colcom Foundation also provides funding for local parks, sustainability efforts, and holiday events like the Pittsburgh Downtown Holiday Market, where the logo of Colcom Foundation appears prominently over the main stage in Pittsburgh’s Market Square, a public park. As well, the anti-immigrant group Colcom’s logo appears on Santa’s House, a small house where children wait anxiously in line pose for photos with Santa Claus

“On the national level, they are one of the leading funders anti-immigration nationalists and on the local level, they are sponsoring this basic civic thing that makes their name look perfectly anodyne because nobody else knows what they are up to,” says Public Citizen’s Research Director Rick Claypool, a Pittsburgh area native, who was shocked discovered Colcom’s logo when taking his kid to enjoy the holiday festivities.

“Colcom Foundation has supported numerous [Pittsburgh Downtown Partnership] initiatives, including as a founding sponsor of the Holiday Market’ said the organization’s spokesperson Leigh White in a statement.  “Since its founding the Holiday Market has provided opportunities for local businesses, makers, artisans, and an increasingly diverse array of global merchants.”

However, Claypool says that it’s vital in the wake of the Tree of Life Synagogue shooting to expose groups like Colcom and not allow them to launder their nativist aims by funding events like Pittsburgh’s Downtown Holiday Market.

“Pittsburgh aspires to be a progressive town, and to be welcoming to immigrants,” says Claypool. “So does Colcom, this foundation that spends tens of millions of dollars funding anti-immigration nationalists — some of the people behind Trump’s policies — get a pass because it sponsors parks, museums and Santa’s house? If you just ignore it, how are you not complicit?”