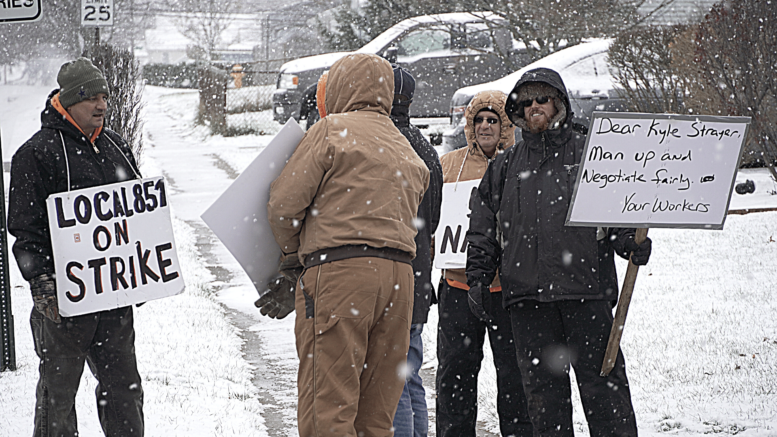 The night before the Erie Strayer ironworker’s union reached a tentative agreement that ended their 75 day-long strike.

The tentative agreement, which covers 40 unionized workers at the plant, gives workers a 3% wage increase and a dental plan for the first time in company history that could potentially save families thousands of dollars a year on out-of-pocket medical expenditures. The agreement, however, contained no concessions on health care or union rights.

Most importantly, workers felt that the strike gave the union a new sense of respect in the workplace, where before the union struggled with management at the small family-owned company.

“This has been absolutely great. I feel ecstatic about this one because I was honestly afraid that they were going to bust the union by any means necessary,” said third-generation Strayer worker Steven Carpenter. “They heard our voice and can’t simply say that we are expendable.”

The inclusion of the dental plan came as a shock to many.

“We were told and bullied before the strike that we would never get this, it never will happen. This company has never had dental,” said Strayer Worker and negotiating committee chair Glen Ybanez. “And, you know, with their proposal yesterday, that was the first thing they laid out on the table was the dental. And with the wages, it kind of stunned and shocked us for a second there.”

Workers say that repeated picketing of the suburban home of Erie Strayer CEO Kyle Strayer over the last two weeks led the company to offer the dental plan, which they thought they would never get.

“We definitely saw some movement after we picketed the owner’s house,” said Carpenter.

The strikes came after nearly a year and a half of planning that began in the garage of local union supporter Frank Lockwood during the summer of 2020 when ironworkers were unable to find a place to meet. Throughout the process, many of the ironworkers formed a new bond of solidarity.

Workers at first doubted if they would get much support from the international union of the ironworkers but were floored when the international invested heavily in their strike. The Erie labor community also showed up and donated heavily to the workers’ strike fund. (See our story “As Winter Hits, Ironworkers Escalate Key Erie Labor Fight.”)

Unlike other strikes where workers are only required to work one or two picket line shifts a week, all the Erie Strayer workers were on the picket line nearly every day.

“This bonded the crew a lot closer together,” said Ybanez. “When you got one guy starting to give up another guy picked him up and said let’s keep going. If one guy was weak, the other four picked him up. I never gave up, I kept on fighting.”

Erie Strayer ironworkers say that the lesson of their strike for other workers is clear.

“Don’t give up,” said Carpenter. “Figure out a way to break through that wall and make sure you are seeking outside support when you don’t think you have that kind of strength because together you are absolutely strong enough because there’s no stopping anyone when you stick together and actually work towards the same goal.”

As the Christmas party winded down and family members left with bags of Christmas cookies, lead bargaining committee member Ybanez yelled to another member.

“Make sure you use that dental plan and make sure to take your kids to the dentist because we won that!”

Donate to Help Us Cover Strikes During the Holiday Season

Be the first to comment on "After 75 Day Strike, Erie Ironworkers Win Big Changes"