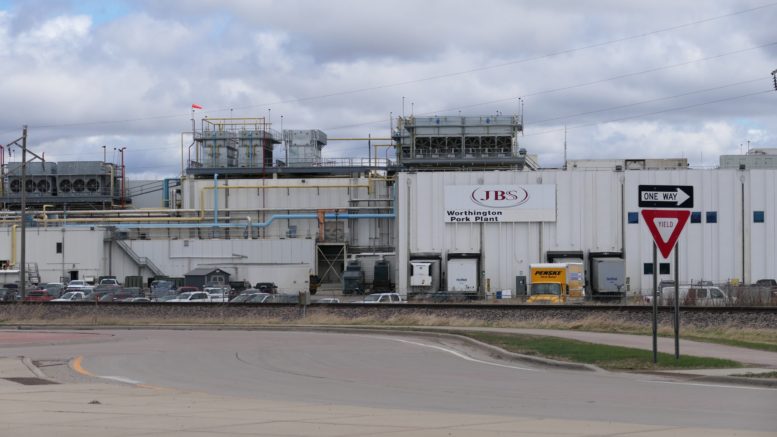 Greetings from the Burgh, where we are employers increasingly fighting back against striking workers.

153 Strikes on the Board

Folks, there are now 153 strikes up on the map. Check out the map here.

Donate to help us keep it going.

After 5 Workers Have Died, JBS Is Now Threatening to Sue UFCW

At a JBS meatpacking plant in Greely, Colo., 5 workers have died of COVID-19 and at least 100 workers have tested positive for the virus.

However, now JBS is threatening to sue the UFCW because of the negative media attention that they have received.

From KUSA in Denver:

JBS has sent a cease-and-desist letter to the union that represents its workers, arguing that it “has adopted a strategy of generating negative media attention and public opinion” to gain concessions from the company while it battles an outbreak of the novel coronavirus at its Greeley meatpacking plant.

They provided a copy of that letter to the 9NEWS by United Food and Commercial Workers Local 7 on Tuesday, and a rebuttal from the union’s president, Kim Cordova.

“Unfortunately, your cease and desist letter, threatening to stifle our voice, and those of our members, as well as pursuing claims for unfounded, speculative, and unrecoverable damages is rife with numerous inaccuracies, suppositions, and erroneous conclusions won’t spend time rebutting in their entirety,” Cordova wrote.

On Wednesday, Minnesota Governor Tim Walz protested with their cars as state and federal officials outside of a JBS plant in Worthington, Minnesota, where more than 600 workers have tested positive for COVID.

“I’ll be damned if I’m going to be pushed to open anytime sooner than it’s feasibly safe to operate,” Matt Utecht, the president of UFCW Local 663 told Fox 9 Minneapolis.

Transit strikes are growing in the South. Already, workers in Richmond and Birmingham have gone on strike.

Now, Greensboro Transit Workers have joined the effort. The strike came after a co-worker tested positive for COVID-19.

(To read more, check out the Observer News & Record.)

Transit Workers in the Gwinett Atlanta suburbs could be next to strike.

Truckers Strikes May Be Brewing

This week, truckers in Houston, Phoenix, and Los Angeles held “slow down” protests on major thoroughfares to protest having their pay cut while being asked to do more.

Rachel Premack at Business Insider has the story:

The low rates have galvanized drivers like Thomas Ramirez to participate in demonstrations. Ramirez joined dozens of other truck drivers in a slow-roll from Los Angeles to San Bernardino on April 24 as his pay dropped by 20%.

Even though his job moving medical supplies has become more hectic than ever, rates are crashing — and for some, the pay isn’t enough to cover the expenses of fuel or truck maintenance. “Rates are going to be so bad that truck drivers are not going to move their trucks,” Ramirez told Business Insider. “We’re not going to work for free.”

Another protest is planned in Southern California on May 1.

For more, go to Business Insider.

Finally, Iowa Starting Line has a good piece looking at the fear of children of immigrant meatpackers:

“When all this started, I was scared because my parents didn’t have the knowledge about this virus until two or three weeks ago,” Nancy said. She told her parents to stop going to work because she knew the risk of so many people working close together.

According to Nancy, the popular belief among workers was that people would get infected in big cities, but not in small towns. But it happened, and it happened fast.

She is upset with the plant because they never told their employees about workers who were already ill with the coronavirus, and, when asked, nobody in a supervisory capacity said anything. The plant also failed to provide basic education about the virus and did not take any safety measures.

“I would like to do something to hold these companies accountable, but my relatives are afraid to lose their jobs. I hope one day there’s justice for the workers,” Nancy said. “I’m tired of seeing that we are treated like second-class citizens.”

For more, go to the Iowa Starting Line.

Be the first to comment on "After 5 Workers Die, JBS Threatens to Sue UFCW – Greensboro Transit Workers Strike – Truckers Strike Could Be Next?"