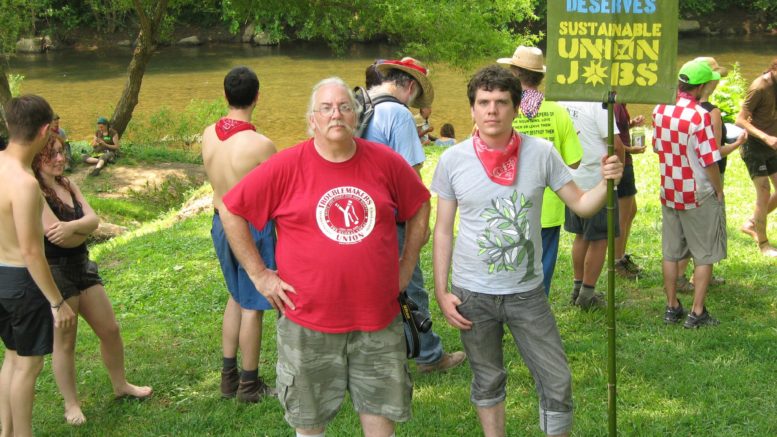 As I watch the picket lines outside of the Erie GE/Wabtec locomotive facility this week, I can’t but help to think of my friend the late Mark Haller, a proud member of UE Local 506.

Mark was a skilled photographer, whose photographs would regularly appear in the UE News and go viral online.

Mark like me was autistic and a great mentor for understanding the challenges and discrimination that I would face in the world of trade unionism as autistic.

Below is copy of an obituary that I wrote of Mark Haller on December 13, 2013

On Sunday, one of the most kindred spirits I’ve met in my 27 years in the labor movement died of a sudden heart attack. Mark Haller, 54, was a GE locomotive worker in Erie, Pa. and a member of the militant United Electrical, Radio and Machine Workers of America (UE) Local 506. My father, Gene Elk, was his union representative.

In addition to my dad bailing us both out of a lot of trouble over the years, Mark and I were UE Brothers, proud autistics and foul-mouthed “yinzers” from Pittsburgh—which meant we got along perfectly. Like me, Mark found that the only way he could personally deal with the voicelessness and sense of isolation caused by his Asperger’s Syndrome and depression was to stand in solidarity with others.

And by standing in solidarity, I mean Mark was everywhere: marching alongside fellow activists at labor actions, snapping photographs of them with his ever-present camera and, in one instance, literally hauling their excrement up and down a mountain to help them avoid arrest.

No, really. In June of 2011, labor and environmental activists embarked on a five-day, 50-mile hike on public roads through West Virginia to save Blair Mountain, the site of a 1921 labor battle in which more than 100 striking miners were killed, from mountaintop removal, an ecologically devastating method of mining. The obvious logistical issues of addressing bodily functions on a five-day hike were only further heightened by the potential threats of arrest from West Virginia’s police force. But Mark solved the problem by rigging up a trailer to the back of his truck and putting portable toilets on it, hauling them along the route so that activists could relieve themselves without winding up in the slammer.

As a longtime union member born in the foothills of the Appalachian Mountains in Western Pennsylvania, Mark was passionate about bridging the ties between the organized labor and environmental communities. In July 2012, Mark, along with 50 other protesters, marched against the Hobet mountaintop removal mine in Boone County, W.Va. Though the action reportedly faced fierce resistance from unionized miners working at Hobet, what struck Mark the most about the march wasn’t the climate of intimidation—he’d expected that, after all. What did surprise him were the 16-foot-high Caterpillar dump trucks that stood on top of the mine.

“Walking in there, I knew all that shit was mine,” Mark said, referring to the equipment used by the miners at Hobet. “If they were made while I was working at [GE in] Erie, I probably had something to do … with every fricking one of those coils in those diesel engines. It’s my job on the line as much as [miners’].”

Still, despite the fact that Mark realized getting rid of coal mining might ultimately endanger his own employment, he thought it was important to stand up against unsustainable and harmful fuel sources.

“As much as I hate to admit it, we gotta get rid of coal [as an energy source], and I know my union brothers who are coal miners really don’t like hearing that,” Mark once told me. “Those bastards that are doing the mining down [in Appalachia] are the perfect people to put roads to the tops of mountains so we can get some windmills up. It could be mining the wind instead of the earth.”

Mark was also willing to sacrifice himself physically to stop the destruction of the mountains he loved so much. When protesters returned to their campsite during the anti-Hobet trip in 2012, they feared being attacked by dissenters. That night, Mark stood watch so that the other activists could sleep.

“We were on edge because earlier a counter-protester had fired some shots into our camp sign at the end of the road,” wrote activist Louis C. Martin on a memorial Facebook page set up in Mark’s honor. “Around 6 a.m., my imagination started to get the best of me, and I told Mark, ‘I’m a nervous wreck, man.’ He said, ‘Go get some sleep, Louis.’ I said, ‘Are you sure, Mark?’ He said, ‘I’ll be fine. If they take some shots at me, I’ve got plenty of padding on the front here.’”

Mark wasn’t afraid of violent resistance because he wasn’t afraid of himself. Despite the social coping mechanisms he’d developed that would have allowed him to “pass” as neurologically typical, Mark didn’t want to hide his autism. He wanted to live openly and embrace the eccentricities that made his mind so unique. And in turn, his personal strength gave younger activists the courage to be themselves and stand up for what they believed in.

“I remember last year while we were leaving [Hobet Mine], we walked for more than two miles, through a gauntlet of hell,” remembered Dee Frostbutter on the memorial page. “People chased us in their trucks, yelling racial, homophobic and transphobic slurs. They threatened us, threw bottles and rocks, shot at us with paintball guns and tried to run us off the road with their trucks. Mark saw that I was quickly falling apart. He came over and put himself in between myself and the shitheads. He talked to me, kept me safe and kept me going. I couldn’t have done it without [him].”

But Mark didn’t limit his gestures of solidarity to labor rights or environmentalism. Just like the young activists at the Hobet Mine march,  Mark tried to keep me safe when I felt like I was falling apart, too. Just last week, a Wall Street Journal writer publicly mocked me on Twitter by claiming that I was having a mental health breakdown. As someone who has had my share of them, I don’t find the subject of emotional breakdowns particularly funny, especially as a way to derail professional or political disagreements. Out of the blue, I got a note from Mark telling me to hang in there. It made a big difference to me, because I knew he understood what it felt like to be so vulnerable to personal attacks.

“Never stop fighting for what you believe in,” Mark was fond of telling people in doubt. “It will one day make you great.”

In an email to In These Times, Ari Ne’eman, who was appointed in December 2010 to the National Council on Disability as the first openly autistic White House nominee, offered the highest praise of the role Mark played in the autistic community.

“Mark spoke up for his beliefs and argued for trying to make the world a better place for all those he was connected to. You can’t help but respect and admire someone like that,” said Ne’eman. “Mark saw the autistic community’s struggle as part of the larger movement for social justice—we would live in a better world if there were more people like him in it.”

It makes me sad that I couldn’t make it to Mark’s memorial in Erie, Pa. on Thursday night, as I was attending a Town Hall for group of auto workers stuck in a tough union fight at Volkswagen in Chattanooga, Tenn. Though I wish very deeply that I could have been there, I’m sure that Mark would have encouraged me to skip it.

“Well Mike, I’m dead. Hey, when you are in the labor movement, sometimes you gotta skip your friends’ funerals,” I can imagine Mark telling me with a laugh. “Besides, funerals aren’t nearly as much fun as union rallies.”

My dad and I will miss him dearly.

Mark died in December of 2013 while I was away covering the doomed union election nail biter at Volkswagen in Chattanooga. The following is the obituary of him that I wrote that originally ran in In These Times Magazine on December 13, 2013In Memory of Mark Haller: Union Brother, Autistic and a Lifeline for Many