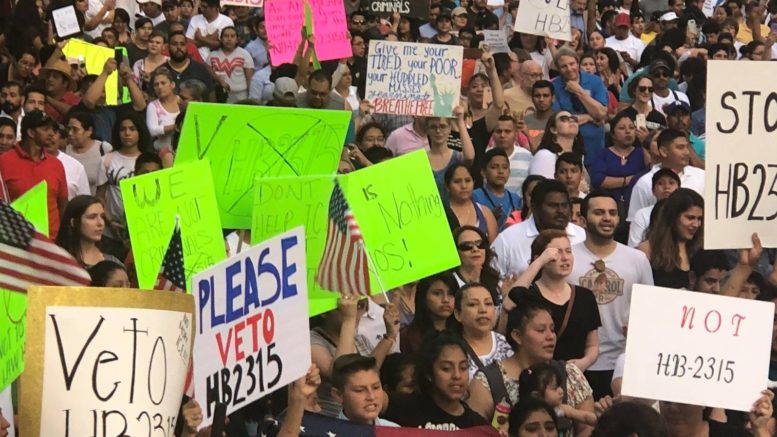 By Mike Elk with help from Max Zahn

It’s Payday folks! Greetings from Hanley, North Carolina, where Payday Report has been out in the field with the Farm Labor Organizing Committee (FLOC).

While Democratic North Carolina Governor Roy Cooper is painting himself as a hero to the teachers’ union this week, championing their bill to raise teacher pay by an average of 8 percent, he is currently being criticized for illegal union busting.

As Payday covered last July, Cooper is currently being sued by the FLOC, which represents 12,000 workers in North Carolina, for his role in signing a bill that takes away their ability to automatically deduct workers’ dues from paychecks. (See more here.)

Donate to Payday to help us continue to investigate how FLOC intends to fight back against Cooper’s anti-union farm bill.

The march comes as Republican Tennessee Governor Bill Haslam debates vetoing one of the most restrictive anti-immigration laws passed by any state legislature. The bill, titled HB 2315, would require all localities within Tennessee to inquire about immigration status in all of their interactions with people.

“HB 2315 would formalize ICE’s abuse of power and make Tennessee a hostile and dangerous place for immigrant families” said National Immigration Law Center Executive Director Marielena Hincapie “We stand with immigrant communities in Tennessee in urging Governor Haslam to listen to the outcry from Tennesseans across the state and to heed the warnings of civil rights groups around the country: HB 2315 is a gross overreach of federal power and harms immigrant families, public safety, local taxpayers, and Tennessee’s reputation.”

The Painters’ Union has also called on Haslam to veto the bill.

“This is not just an immigration issue, but a labor rights issue as well. Our current immigration system is broken and until there is a just federal solution, we cannot allow local laws to persecute hardworking people” said Roger Hester in a statement put out by the union.

“As Labor unions, it is our responsibility to fully represent all members and work towards opening our doors to future members that may be affected by this bill if signed into law—we must prioritize the safety and livelihoods of workers everywhere if we are to truly uphold our American values of prosperity,” said Hester.

Haslam has until Tuesday to decide whether he will veto the law. So far, he says he’s undecided.

“We’re reviewing all the implications of it,” Haslam told the Tennessean earlier this week. “My one concern about it is that it’s driving up a lot of fear on both sides. Fear of people that we have sanctuary cities, which we don’t, and fear of people that it would mean mass deportations, which I don’t think it means that either.”

Next Wednesday, 50,000 casino workers, who are members of the Culinary Union, are expected to fill an arena to vote on whether or not they should strike at 34 casino-hotels throughout the city.

A strike in Las Vegas could escalate strike fever nationwide at a time when teachers’ strikes are cooling down as summer approaches.

“In this negotiation, we were expecting to already have our contract right now,” said Geoconda Arguello Kline, the secretary-treasurer for Culinary Union Local 226, in a statement put out by the union. “We see it is not there yet. June 1st expire, we have a deadline and what we want to have is all the workers right now get prepared, and that’s why May 22nd is a key date for all the Culinary workers.”

Last year,  over 300 Vox Media workers unionized in a historic union drive. And, not content to simply stand up for themselves, workers at Vox are standing up for hotel workers at The Terranea Resort in Rancho Palos Verdes, California.

The resort has faced criticism for refusing to recognize a union organized by its staff and for rampant sexual harassment problems.

“Any organization should think hard before giving its business to a hotel that treated me in the way I’ve described in my lawsuit,” Sandra Pezqueda, who is suing the hotel over allegations of sexual harassment, said in a statement. “Why do they need to hold the conference there? Los Angeles has so many hotels to choose from.”

Pezqueda was profiled by Time Magazine as one of the “Silence Breakers” for suing the resort after she was fired for reporting sexual harassment.

Vox Media union members have heeded the call and are pressuring Vox to cancel their conference this month at the resort.

“The Vox Media Union Bargaining Committee stands in solidarity with the workers at Terranea Resort who are fighting for a fair process agreement that will allow workers to choose whether to unionize so that they can fight advocate for a better workplace,” said the union in a statement released earlier this week.

Milwaukee Teachers May Strike Next Week

Payday Report has learned that teachers in Milwaukee may take part in a job action or go on strike next week.

Currently, the Milwaukee Teachers Education Association is facing a hostile takeover of their school district from Governor Scott Walker. In response, the 4,800-member union has circulated cards calling on workers to pledge to do “whatever it takes” to push back against the takeover.

Yesterday, the MTEA leadership issued a letter with demands that could resolve the situation. They intend to negotiate with the school district and the new incoming superintendent through the weekend.

Teachers in Pueblo, Colorado won a 2-percent raise as part of an agreement to end the first teachers’ strike in Colorado in nearly a quarter-century. Instructors in the city, located about 100 miles south of Denver, voted 495-62 in favor of a contract that included the restoration of pay for three days of the five-day strike.

“How do I feel? Other than tired, we’re glad that this has passed,” Suzanne Ethredge, the president of the Pueblo Education Association, told The Pueblo Chieftain. “I’m a little surprised the contract passed with that wide of a margin, but from what we were hearing, people seemed to have been pretty positive about it.”

Over 1,000 contract workers, who provide support services for National Guard soldiers and their families, have called on the Department of Defense to reverse a total of $20 million in pay cuts incurred over the past two years.

Ahead of National Armed Services day, on Saturday, the advocacy group Good Jobs Nation issued a letter detailing wage cuts of up to 55 percent for a given position, due to job reclassification and the rebidding of contracts.

In 2016, many of the workers filed complaints with the Department of Labor. In April the Department of Labor asked the National Guard Bureau to address the job classification and wage rate for a portion of the positions. Afterward, some workers had their pay restored last November but saw it drop once again when their contract was rebid four months later.

“Every one of these workers needs decisive action now,” said George Faraday, legal and policy director at Good Jobs Nation. “Today, as the nation prepares to celebrate our Armed Forces, we are calling on the National Guard Bureau to immediately amend its Family Program contracts to fully restore pay rates for all these dedicated workers.”

Missouri voters will decide later this year whether to approve a right-to-work measure passed by the state’s legislature. Black workers in Missouri would be hurt most by the law, according to an analysis released by the Economic Policy Institute.

Settlement Over Use of Nonunion Labor Sends Warning to Construction Industry

A $76 million settlement against a New York City concrete contractor has served as a warning to construction companies that set up copycat ventures to use nonunion operations for union projects.

The company, Navillus, allegedly outsourced work to a nonunion sister company on projects that were supposed to contribute to union pension and welfare funds, violating collective bargaining agreements with multiple trades.

The settlement, thought to be the largest of its kind, may foretell the outcome of a similar case brought against New York Concrete, which allegedly used a nonunion shell company for work at 50 Hudson Yards.  Hudson Yards is a $3 billion Manhattan high-rise project at the center of a dispute between construction unions and the Real Estate Board of New York, the city’s leading real estate trade organization.

— Our friends Paul Blest and Nick Martin over at Splinter took a long look at the root causes of the North Carolina teachers’ strike:

Fifty-two percent of the state’s teachers have a second job, per EdNC. Meanwhile, N.C. state superintendent Mark Johnson, who makes $127,000a year, chided his workers when they called for more funding and raises, telling them $35,000 is “good money.”

Sarah Leary, a fourth-year theater arts teacher at T.C. Roberson High School in Asheville, said second jobs are a necessity for most young teachers she knows; she’s waited tables and worked as a freelance model on the side. “At the end of the day, teachers working extra hours somewhere else is just less time we have to spend improving the quality of education our students receive,” she said.

Jamie Shell, who has taught for 13 years, told Splinter she works at the box office for a stage theater. “I was working at the mall up until February, but I couldn’t take working six days a week anymore,” she said.

Go to Splinter to read the full story.

— The New Republic has a look at a video game designed to help stop sexual harassment:

Two years ago, nine students at an alternative school on the north side of Chicago spent part of their summer playing a video game named “Bystander.” It begins on the day of an important assembly at a Chicago high school. “No one deserves to be harassed,” says Virgil, the virtual faculty member who guides players through the game. “Unfortunately, around half of all students grades seven through twelve reported experiencing some type of sexual harassment in the past year.”

From there, students move through four scenarios: One is devoted to teaching players to correctly identify instances of sexual harassment during a normal school day. In another, the player intervenes in a situation involving consent and alcohol. The most nuanced modules, however, are the two that take place after a traumatic situation has already occurred. It’s up to the player to steer his or her peers away from blaming themselves, to affirm their experiences, and to guide them towards help.

“Bystander” was officially launched in classrooms across three Chicago charter schools in October 2016.

For more, check out the story at the New Republic.

— Finally, veteran labor journalist David Bacon has a long profile of the role of Filipino migrants in the historic Grape strikes over at Dollar & Sense.