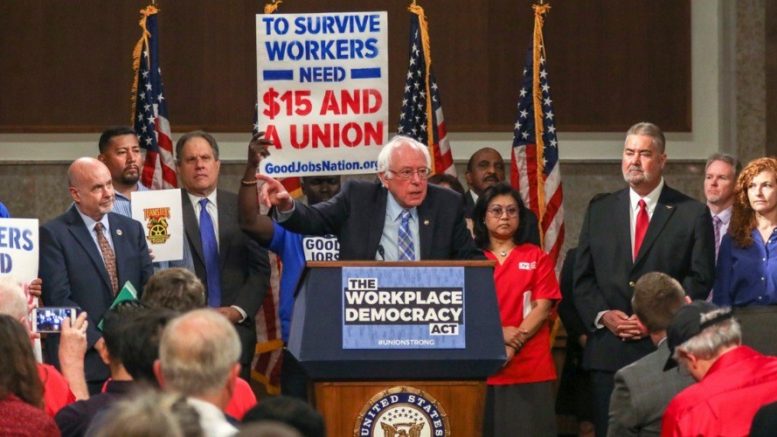 When Tim Shorrock heard Senator Bernie Sanders blast some of the union workers on his campaign last week for speaking out about their working conditions, it brought back bad memories for the 68-year-old, a pioneer in the field of unionizing left advocacy organizations.

In 1984, Shorrock tried to unionize the Ralph Nader owned publication The Multinational Monitor. After workers petitioned to unionize, Nader responded by firing all three staff members.

“I don’t think there is a role for unions in small nonprofit ’cause’ organizations any more than . . . within a monastery or within a union,” Nader told the Washington Post in 1984. “People shouldn’t be in public interest groups unless they believe in it and are ready to work for it.”

In a retaliatory move, Nader even tried to have Shorrock criminally charged with stealing documents when he was fired; a charge, which D.C. police declined to pursue after it was determined that Shorrock had merely taken home his work documents.

Later, Shorrock claims that Nader took extensive steps to try to blacklist both Shorrock and his other two co-workers from being employed in the progressive press.

“There are organizations that have a founder–hey personalize it,” says Shorrock. “And these organizations become personality cults and its seen as disloyalty basically to their cause that you are trying to bring a union in these situations.”

“There is this attitude of characterizing those that want to organize in progressive organizations of being selfish and narcissistic or something that we are putting our individual needs above the broader need for change, which is crap,” says Shorrock as he laughs.

However, fear still exists among many progressive staffers about speaking out about working conditions especially when management tells workers that speaking out will hurt their cause or engages in retaliation.

Last week, Bernie Sanders sent shivers down many of his campaign staffers’ backs when he took to the press to blast workers who spoke out about working conditions as the campaign’s union sought to renegotiate the contract.

“It does bother me that people are going outside of the process and going to the media. That is really not acceptable. It is really not what labor negotiations are about, and it’s improper,” Sanders told the Des Moines Register.

Many Sanders supporters, even some from union backgrounds, took to social media to denounce those who spoke out, questioning if the workers, who went to the press, might even be “anti-Bernie moles” inside of the campaign.

Both the Campaign Workers’ Guild and UFCW Local 400, which represents workers on the Sanders campaign, declined to do interviews for this story. The Sanders Campaign also did not respond to a request for comment for this story.

Many workers in progressive causes fear hurting the brand of their cause by speaking out.

“It’s not just that we are afraid of our employers retaliating against it, but often our co-workers feel deeply invested in the cause of the campaign and don’t want to do anything to hurt the campaign publicly,” said one union activist working on a Sanders campaign who wishes to remain anonymous out of fear of retaliation.

Many of the Sanders supporters and even some Sanders stafferes denounced the staffers who spoke out, saying that internal union dissidents were simply giving fuel to Bernie’s enemies by speaking out.

“Is Bernie refusing to bargain in good faith? If not, I strongly suspect his staff has been infiltrated by people who want him to lose,” wrote Al Hart, retired UE News Editor and a Labor for Bernie activist on facebook.

“There is a reason why labor staff unions almost never go public with the issues over which they’re negotiating with the union leadership. It’s because they know that the union they work for has vicious enemies who will use any information that helps them defeat the union and the idea of unionism,” wrote Hart on Facebook.

However, many progressive staffers say that the lack of public accountability in many progressive organizations is part of the reason why sexual harassment and other forms of abusive workplace culture are rampant throughout the left.

“So many men in organized labor know that they can get away with sexual harassment because they know that they are never going to be held publicly accountable,” says one union staffer associated with the SEIU #MeToo activists. “Too many women in the labor movement are scared of being accused of giving union busters ammunition by publicly calling these men out.”

Many campaigns insist on message control and say that dissenting voices hurt their brand and their ability to appeal to the public. However, to the contrary, many progressive activists argue that candidates and progressive leaders, who are responsive to internal public criticism, actually increase their appeal by showing their responsiveness to the public.

“It strengthens us as unions and as a movement to have that kind of public debate and discussion,” says Tim Shorrock.

While the Sanders campaign ultimately decided to settle with the union this week, many feel that the left has a lot to learn from the dust-up.

“This is the first time that. we’ve had unions on presidential campaigns and we still got a lot to learn, I think this was a learning experience for us all and hopefully, we can grow from it to truly have a revolution from the bottom-up,” says one Sanders staffer, who was not authorized to speak by the campaign.