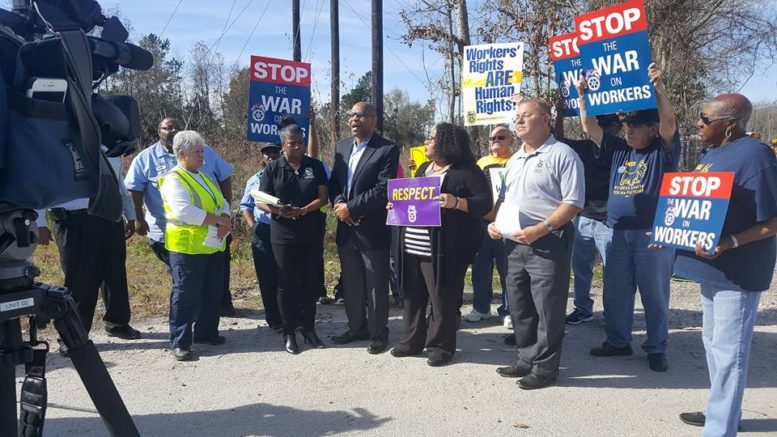 It’s Payday folks!  Trump just took the oath, but workers in the South are still finding ways to kick ass.

3,000 Boeing Workers in Charleston Expected to Vote Union Next Month

The International Association of Machinists and Aerospace Workers is announcing today that it has filed for an NLRB election to be held at Boeing’s North Charleston plant for approximately 3,000 workers. If successful, the election would be the largest win by a union in the South in a nearly a decade.

Currently, South Carolina has the lowest union density in the nation, with only 2.1 percent of its workers being represented by unions. The Machinists’ latest move coincides with the United Auto Workers’ campaign to organize BMW’s plant in Spartanburg, South Carolina. (Volvo is also opening a 2,000 person plant in Berkeley County in 2018, which the UAW is almost certain to go after, as the Swedish automaker enjoys good relationships with unions.) The Machinists’ election could also open the door for more organizing at Boeing’s suppliers.

Since the North Charleston plant opened in 2011, Republicans in South Carolina have ferociously attempted to prevent the Machinists from organizing there.

Regarding efforts by unions to organize at new plants in her state, Gov. Nikki Haley famously quipped in 2014, “You’ve heard me say many times I wear heels. It’s not for a fashion statement. It’s because we’re kicking them every day, and we’ll continue to kick them.”

This week’s Lunch Pail goes out to the 60 workers that opted to form the Greensboro City Workers Union, which will be an affiliate of UE Local 150 North Carolina Public Service Workers. The workers join other city workers that have opted to join UE Local 150 in Charlotte, Raleigh, Greenville and Durham.

Currently, public sector workers in North Carolina lack the right to collectively bargain, but through strikes, workplace actions, and legislative campaigns, workers in the state have been able to win big campaigns.

The union has strong support among the city’s sanitation workers, who are forced to work ten hours a day without a lunch break. One area of focus of the Greensboro City Workers Union will be to amend the city’s recent law that raises city employee’s pay to $15 an hour by 2020. That law currently exempts 200 (mainly temporary) employees from receiving the increase.

This week, the Raleigh City Council voted to adopt a universal living wage. The measure would raise all city workers’ wages to at least $13.76 an hour by the next fiscal year. The measure is expected to cost the city an additional $500,000 a year and will lead to raises for 215 city employees.

The measure makes Raleigh the tenth city in North Carolina to adopt a living wage measure.

Last year, Tennessee’s Republican Gov. Bill Haslam pushed a plan that would privatize 10,000 of the state’s jobs. Citing a study by Nashville accounting firm KraftCPA, Haslam claims that the proposal would save the state $35 million a year. The study also found that the University of Tennessee would save the University of Tennessee system $17.6 million a year.

However, some have questioned the accuracy of the study after it was revealed that KraftCPA contributed $15,000 to Haslam’s re-election.

The United Campus Workers, AFSCME, and SEIU have all opposed the privatization plan. Now, the unions have gained the support of a bipartisan group of state legislators from Eastern Tennessee, who have raised concerns about the effects that outsourcing would have on the university.

“No longer will employees share the same goals and loyalty of their employer, the University of Tennessee,” wrote a group of 17 Republican state legislators and three Democrats in a letter to Gov. Haslam this week. “Jobs and benefits will be at the whim of an out-of-state company which leads to an unnecessary psychological insecurity for employees and their families.”

In 2016, after mounting safety concerns, the Savannah-Chatham County School District decided to cancel its privatized school bus contracts and bring its school busing back in-house. In a strange twist, the effort led to drivers in the Savannah area losing their collective bargaining rights along with their union contract as public workers.

Workers say that the loss has led to a return of arbitrary discipline and favoritism in the school bus system. While the state does not allow school districts to engage in collective bargaining, the workers have been meeting with the school district in the hopes of having many union contract provisions written into school regulations.

After months of meetings, the two sides are still very far apart on several key union issues. Today, the workers are holding a rally in Savannah at lunch time to put pressure on the school board.

“We have been meet with much resistance, but we will not nor will we give up the fight,” said Savannah school bus driver Kendra Banks in a statement. “We are working to restore seniority, grievance procedures, fair treatment, and pay.”

Duke Graduate Employees to Vote on Union This Month

After facing months of legal challenges to their petition for a union election, the NLRB agreed to conduct a union election for Ph.D. students, who perform research or instructional services, to join SEIU. The election will be a mail-in ballot, beginning next Wednesday and continuing through February 21.

“We are very excited that the NLRB affirmed that graduate student workers at Duke should be considered employees as well as students, therefore allowing us to move ahead with our election,” Duke Graduate Student Employee union activist Scott Barish wrote in an email to the Duke Chronicle. “We are also pleased that the election will take place as a mail-in ballot as this will allow the largest number of graduate student workers to vote including those on field study who are away from campus.”

On Wednesday, labor activists from across the Louisville region gathered at the Holiday Inn to protest an event sponsored by the Kentucky Chamber of Commerce and the Society for Human Resource Management on how employers could remain “union-free.”

In light of events like this, some activists questioned why Chamber of Commerce affiliates in Kentucky continue to receive taxpayer funded grants.

“Their local affiliate, Greater Louisville Inc.- The Metro Chamber of Commerce, receives $300,000 in funding from Metro Council,” says Louisville labor activist Richard Becker. “Might be worth asking Mayor Fischer and our council members why our tax dollars are funding an anti-worker outfit.”

“They moved right across the hall from the room that Teamsters Local 89 rented for the protest” quipped JP laughing. “It gave real meaning to “Which Side Are You On?”

Each month, Payday sets a goal for new monthly donors. This month, with ten days left to go, we have already exceeded our goal of 15.

Currently, we have 114 monthly dues-paying readers contributing an average of $8.15 per month for a total $926 per month. At our current rate of growth, our one-and-a-half person operation will be fully sustainable within 12 months without any grant money.

Become a monthly donor today to help us get to full sustainability.

The Durham-based Indy Week has a moving obituary this weekend of David McKnight, who died this week at age 69:

Being the son of a prominent civil rights figure—under his direction, and despite constant death threats, Pete McKnight’s Charlotte Observer was a progressive voice on race relations and urban renewal during the seventies—made an impression on young David. In 1978, he left his post at the Fayetteville paper to run for Senate against incumbent Jesse Helms. He lost in a crowded Democratic primary and garnered only about nine thousand votes. Still, friends say, his campaign was “classic David.” No extensive wardrobe. No prepared talking points. No car. Just a man, his fiddle, and his brain.

“He walked across the horizontal length of North Carolina as part of his campaign—and, of course, met many people along the way,” Wilson says.

McKnight found inspiration in these people, Pattie adds—and, in them, the way to make his mark on the world. But this optimism was dashed on election night. Pattie remembers sitting in a hotel room with her friend, watching as the returns came in. McKnight was thoroughly disappointed.

He went downhill after that. Perhaps it was his rejection at the polls that sent him into decline. Or maybe it was a series of hardships he faced: his parents’ divorce when he was in his early twenties, his father’s death in 1986, the end of a romantic relationship. Or maybe it was all of these things, or none of them. Maybe it was just the inevitable result of his biology.

When the music poured off his instrument, he was at peace. When the strings were still, however, he was withdrawn and embarrassed at his lack of success; he lamented never having married.

Go to Indy week to the read the full biography of McKnight.

Bloomberg BNA has a long look at which NLRB decisions Trump is likely to overturn.

The National Pastime Museum has a great look at how the end of World War Two led to integration in baseball.

The daughter of a Black Panther turned her father’s 500 page FBI file into art.

Finally, The New York Times gave Killer Mike & Run The Jewels the opportunity to form the ultimate protest playlist – give it a listen here.

That’s all, folks. Remember, keep your chin up. We got a lot of shitkicking to do.