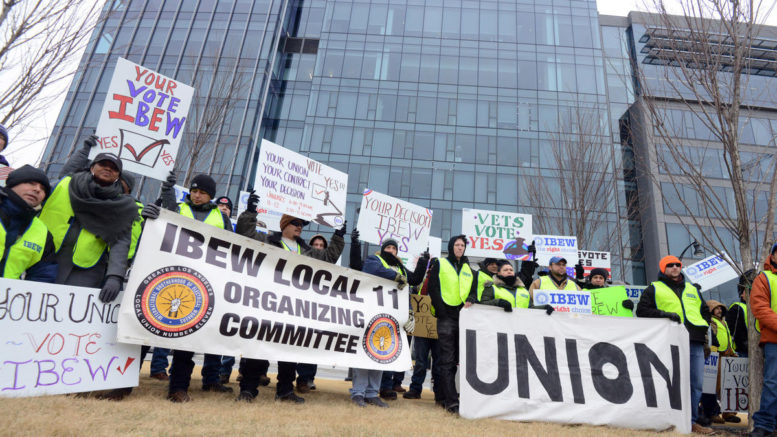 It’s Payday folks! Our Senior Labor Reporter is sick as a dog, so kick in a few bucks towards our winter fundraising drive here so we can afford health insurance this year.

This Lunch Pail goes out to the IBEW Local 410. The IBEW has attempted to organize workers at Baltimore Gas and Electric (BGE) on five separate occasions throughout the last 40 years. Finally, the union won an election there yesterday by a total of 741 to 610.

The last failed attempt to organize BGE was back in 2010. What was different this time was that workers were upset about changes in company policies that began in 2012. This campaign is the culmination of a 16-month organizing effort that began.

“The Volunteer Organizing Committee basically did all of the work. We just guided them along the path,” says McDermitt. “When it’s workers talking to other workers, it’s a much more effective campaign”.

Following the disastrous November school bus crash in Chattanooga that killed 6 students, many in the local community called on the Hamilton County School District to bring school bus services back in-house. The contract for Durham School Services, the private contractor currently responsible for student transport, is set to expire this summer, and the school district is currently debating what to do about getting a new school bus provider.

One barrier to bringing school busing back in-house is that the school district does not own any school buses. The district, which will begin accepting requests for proposals next week, also worries that it will be too difficult to change the contract quickly.

Bernie and the Teamsters Back Vince Fort For Mayor of Atlanta

Fort is supportive of the #BlackLivesMatter movement, raising the city’s minimum wage to $15 an hour, decriminalizing marijuana, and making tuition free at Atlanta’s City Colleges.

The Teamsters are the first union to back Fort and could be a sign of things to come.

“I am certain other unions will be endorsing Senator Fort in short order,” says Teamsters Local 728 Political Director Eric Robertson. “I have talked to a number of labor leaders who want a proven fighter instead of the usual promises of future support for working peoples’ issues.”

While Fort faces opposition from the political machine of outgoing Atlanta Mayor Kasim Seed, if Fort is able to build a coalition of labor, #BlackLivesMatter activists, and Berniecrats, he could win in a crowded primary field that already has nearly a half-dozen candidates in the race.

Over the past year, tens of thousands of prison laborers have gone on strike at dozens of facilities throughout the United States. Now, in an escalation for the campaign, the Free Alabama movement, which has helped mobilize many prisoners, is calling for the state government to cancel their contracts with Aramark, the food-service company that provides meals to more than 500 prisons across the country.

“They are the biggest benefactors of prisoners,” Free Alabama Movement spokesperson Pastor Kenneth Glasgow told the PBS Newshour. “And they have a history of neglecting prisoners, serving bad food, not enough food, or undernourished food … this is why we have chosen to boycott.”

In 2014, a worker severed their thumb while working at a beef jerky plant owned by Lone Star Western Beef in Fairmont, West Virginia. When a co-worker, Michele Butler-Savage, attempted to call 911, the owner of the plant demanded she hang up the phone. Later that day, Butler-Savage reported the incident to a Department of Agriculture inspector. Two days, Butler-Savage was fired.

Now, the Department of Labor is suing Lone Star Western Beef for back pay and punitive damages for illegally retaliating against Butler-Savage.

“Lone Star Western Beef punished an employee for seeking emergency medical care for a seriously injured co-worker. Her efforts were protected under Section 11(c) and showed basic human decency,” said OSHA regional administrator Richard Mendelson in a statement. “No worker should have to fear retaliation from their employer for calling 911 in an emergency, or taking other action to report a workplace safety or health incident.”

This week, the Louisiana Association of Educators (LAE) won a major victory when a state appellate court ruled that Louisiana’s school funding practices are unconstitutional. Louisiana has been including charter schools in its state funding formula intended for the state’s public schools. The court agreed with LAE’s argument that charter schools do not meet the definition of public school because they are privately run, ruling that charter schools funded by local taxpayers must be governed by the local school board.

“This is a significant victory in defending the right of every child in Louisiana to attend a quality public school,” said LAE President Debbie Meaux in a statement. “It is crucial for the state to adequately fund the institutions where the vast majority of Louisiana’s students learn, and a majority of Louisiana’s students learn in public school classrooms.”

A consent decree about police brutality achieved between the U.S. Department of Justice (DOJ) and the Baltimore Police Department, as well as a new DOJ report about brutality in Chicago has restarted a conversation about the role police unions play in blocking reforms.

This week, Reuters published an in-depth investigative study of 82 police union contracts in large cities across the country and found:

Finally, Payday wants to a give a special congratulations to our good friend and Decatur native Andy Grabel of the National Historic Preservation Trust, who worked as part of a coalition for years to get President Obama to create the Birmingham Civil Rights National Historical Monument.

The Birmingham Civil Rights National Historical Monument is one of three dedicated yesterday by Obama. The president also created the Freedom Riders National Monument in Anniston, Alabama, at the Greyhound bus station where civil rights activists were attacked in 1961, and the first national monument of any kind commemorating Reconstruction based around a historic community settled by freed slaves in Beaufort, South Carolina.

“For the last two decades, many communities in Beaufort County have worked to recognize and preserve their Reconstruction heritage and to create a unit of the National Park Service linking these historic sites together. Today’s announcement is a great tribute to their years of work and sacrifice on this endeavor,” said Congressman Jim Clyburn (D-SC) in a statement today. “Today’s announcement is not a final product, but a first step in protecting and preserving the many Reconstruction Era sites in Beaufort County.”

— A big congrats this week to labor reporter Sarah Jaffe, who has launched a new syndicated column called Interviews with the Resistance. Her first interview is with Mississippi activist Kali Akuno of Cooperation Jackson. Give it a listen here.

— Last week, Kentucky became the 27th state in the nation to pass so-called “Right-to-Work” legislation. In a piece entitled “The Origins of “Right-to-Work: Vance Muse, Anti-Semitism, and the Maintenance of Jim Crow Labor Relations”, University of Arkansas Professor Michael Pierce looks at the historical movement which launched “right-to-work.”

— Finally, the Zinned Project has a look at effort to preserve historical sites around the 1811 Louisiana Slave Revolt.

That’s all, folks. I am sick and going back to bed.