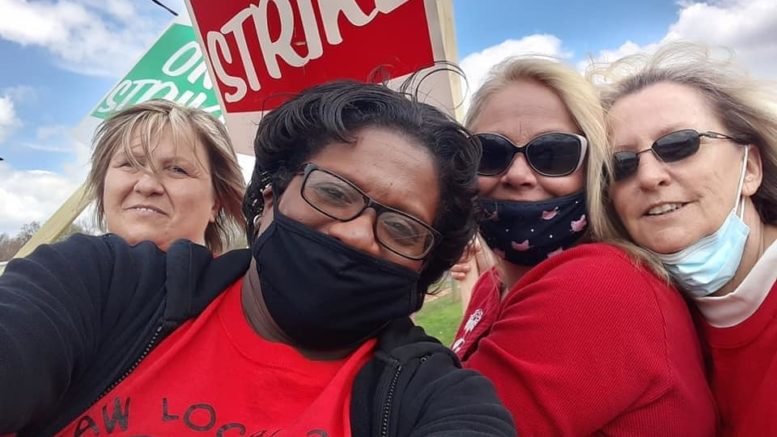 Greetings from the Burgh, where once again the air quality is the worst in the nation.

Only 17 Recurring Donors Short of 600

Believe it or not, your donations help us afford asthma inhalers for days like today and for the many other bad air days that we in Pittsburgh unfortunately experience.

If you can, sign up as one of our recurring donors today.

You can also make a one-time donation as well.

Right down the road from Payday’s HQ, Pitt faculty, both tenure and non-tenured, are celebrating a recent ruling by the Pennsylvania Labor Relations Board (PLRB) as they move closer to a union election.

For more than two years, faculty union activists, organizing with the Steelworkers Union, have argued that the University of Pittsburgh’s Medical School faculty, where opposition to unionization is high, should be excluded from the proposed bargaining unit.

Last week, Stephen Helmerich, a PLRB hearing examiner, agreed with the workers, writing that “The risk of over-fragmentization is remote because the School of Medicine and its faculty have already been fragmented away from the rest of the school by University policy.”

For more, check out The Pitt News.

In Dublin, Virginia more than 2,900 truck assembly workers have gone on strike at Volvo.

In recent years, the plant (the largest Volvo truck plant in the world), has expanded adding $400 million in investments, and has added more than 1,100 jobs since 2016.

However, workers who are members of UAW Local 2069, say that wages and benefits have not kept up with the expansion of the plant.

“The UAW is disappointed that Volvo Truck has failed to present a substantial offer by the March 16 contract deadline despite a contract extension,” said UAW Secretary-Treasurer Ray Curry, Director of the UAW Heavy Truck Department in a statement this Friday. “Our goal remains to achieve a fair tentative agreement for our members, their families, and the community of Dublin, Virginia.”

For more, check out The Roanoke Times.

Today, the RWDSU filed 23 NLRB Charges against Amazon for illegal union election interference during the recent vote at Amazon in Bessemer, Alabama.

The union charges that the company surveilled workers and had the United States Postal Service install a special mailbox right outside of the warehouse so they could watch workers vote.

Additionally, RWDSU contends that Amazon made a number of repeated threats that bringing in a union could cause workers to lose wages or benefits. (See a full list of the NLRB charges filed by RWDSU here.)

Amazon worker Carla Johnson, a 45-year-old cancer survivor, told the BBC that she decided to vote “No” after receiving text messages that informed her she could lose her health care coverage if the plant opted to unionize.

“Amazon has been a godsend for me,” Johnson told the BBC in her decision to vote against the union.

For more on the NLRB, check out Dave Jamieson at HuffPost

The interview has plenty of interesting material, but the most interesting part was this admission:

I just think when you’re talking about a campaign of 5,800 workers, four to five months was not quite enough time. We just needed a little more time. I really do think there’s [a] deeper debrief to be had, where we’ll pull a lot of lessons out of this. I think this campaign is winnable if voting starts March 1. I really believe that, with all my heart, and I believe it actually was winnable up until it wasn’t. If there wasn’t as huge early turnout in early February, before we can really get the messaging out, once we had contact information, then we could win.

Unfortunately, as soon as the ballots started coming in, we saw a very, very, very, very large percentage of early ballots, all within two days, which we know what those were [a reference to the mailbox that Amazon installed outside the warehouse]. And whether the Board deems that illegal enough to re-run an election—we believe they will, but we’ll see. There were nearly 1,000 ballots turned in in the first week of voting, and we knew we lost that vote pretty heavily. But we also knew, as did Amazon, that we smoked them in March, and that’s why Amazon challenged 500 ballots that were all March ballots—because they knew.

When you see “Blowout in Bessemer,” [the title of a critical article by Jane McAlevey in The Nation] when you look at what we saw through our charts and our organizing blocks that we have half, if not more than that, of the warehouse in this moment supporting the union, and that with challenges, this was about a 60/40 vote, and we have a very strong committee—you know, naturally there is going to be a little bit of offense to an article that was written without calling us and without any intimate knowledge of the campaign. I think that that’s understandably frustrating, and I think it’s been documented that [RWDSU President] Stuart [Appelbaum] was frustrated—and I understand that, as organizers, we spend a little less time in that realm, listening to academics. I’ll read it again, because there’s certain things she’s correct on, and I also understand she mentioned that union-busting is disgusting and that workers all over the country would organize if it wasn’t for these slimy labor laws. But she also made a lot of assumptions—and I felt like if those assumptions were going to be made, having taken the time to speak to anyone on the ground, or even workers, is important.

For more, go to Labor Notes.

As always, you can make a small donation to help us pay for health care and rent.