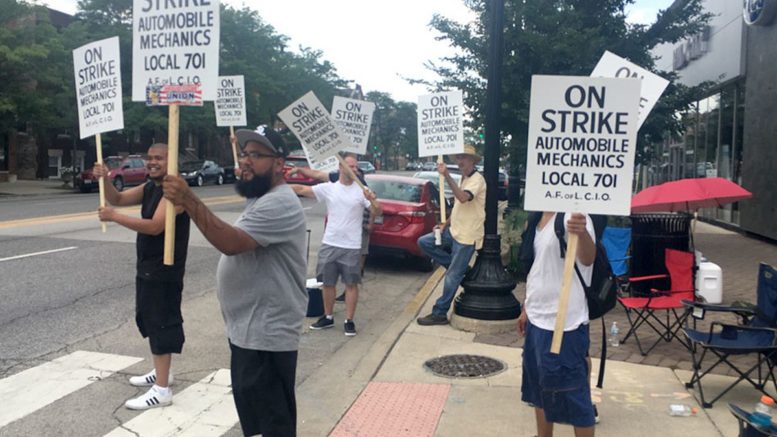 Greetings from the Burgh, where local TV stations are citing Payday’s exclusive on the resignation of retail developer Ira Gumper from the Board of Trustees at CMU following  (Donate a few bucks to keep the momentum going)

The strike comes after 99% of the union voted to strike. With such a strong amount of support for the strike, it could last some time.

The last time car mechanics struck in Chicago it lasted for two months in 2017.

In Palm Beach, Florida, it is suspected that union teachers went on a “sickout strike” to protest Governor DeSantis’ ban on schools implementing mask bans.

“DeSantis tried to buy our support,” a Boca Raton elementary school teacher told Boca News Now. “He bragged about bonuses and higher pay, but it’s all meaningless [sic] of teachers get sick or die. He is playing politics with our lives and the lives of our students.”

Last year, Payday covered how 500 nurses at two hospitals in El Paso went on strike to protest not making $15 an hour.  Now, those nurses have won a first contract.

“We are gratified to have achieved important improvements, especially additional health and safety protections for patients and nurses in the face of yet another Covid-19 pandemic surge,” Las Palmas RN Juan Anchondo said in a statement.

In Fort Wayne, Indiana, a community coalition has defeated an attempt by Amazon to win a $7 million tax abatement. Labor leaders in Fort Wayne hailed it as a massive victory.

“Amazon made $21 billion in profits last year and already received a tax break for the building in Fort Wayne, then they came back looking for more,” Ehren Gerdes, Teamsters Local 414 Business Agent, said in a statement. “The money Amazon requested to not pay in taxes would be a drop in the bucket for the company but could go a long way toward real investments in the Fort Wayne community. We urged the Fort Wayne City Council to vote no and not let Amazon take advantage of our community, and we’re grateful that they listened.”