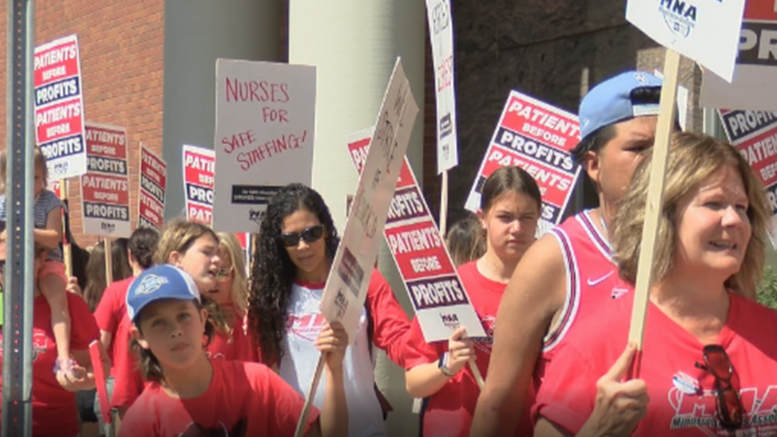 Greetings from the Burgh, where we are wrapping up a busy week tracking a series of exciting strikes across the country.

Thanks to all of those who donated to help us track this growing strike wave.

MLB Agrees to Recognize MLBPA as Union for 5,000 Minor Leaguers

Manfred said they would not force an NLRB election, adding that they would agree to a card check with the union.

“We, I believe, notified the MLBPA today that we’re prepared to execute an agreement on voluntary recognition. I think they’re working on the language as we speak,” Manfred said during a news conference.

The decision to recognize the union is the biggest union recognition victory for organized labor this year.

The MLBPA did not immediately comment on the announcement by Manfred.

15,000 Nurses to Strike Monday in Minnesota

In Minnesota, over 15,000 nurses plan to go on a 3-day strike beginning Monday at several major healthcare facilities throughout the state over a variety of recurring issues around understaffing and burnout. Several healthcare companies have already threatened to sue if they do so.

The Minnesota Nurses Association, which represents the nurses, say they won’t be deterred.

“It is clear that hospital executives are feeling the power of 15,000 nurses fighting for our patients and our profession,” the nurses wrote on their Facebook page on Wednesday. “We will not be intimidated by their attempts to silence or scare us, and we intend to proceed with a strike to win fair contracts to put patients before profits.”

For more on the strike, check out the Minnesota Reformer.

At Eastern Michigan, over 500 faculty members went on strike for 24 hours. The workers were upset about health care premium increases and increasing workloads.

Strikes are illegal at public universities in Michigan, so Eastern Michigan went to court to seek an injunction to block the strike, which they were denied. Union leaders say that the university needlessly wasted money in a frivolous attempt to block a strike that was only intended to last 24 hours.

“Instead of filing lawsuits which have no merit, EMU administrators should focus their efforts on good faith bargaining so we can reach a fair agreement which supports our student,” engineer professor and union leader Mohamed El-Sayed said in a statement.

For more on the strike, check out Inside Higher Education.

Teachers in Washington are on strike this week at the Ridgefield School District, which sits on the other side of the border from Portland. While the school district has budged on giving more money toward wages, the two sides are far from making changes to improve the quality of the educational experience at Ridgefield.

“None of us want to be on strike, but ignoring our dysfunctional intervention program, unsafe staffing levels and the need for more counselors when the district has the money to do something about it is unacceptable,” Ridgefield Education Association Co-President Elizabeth Stamp said in a press release Thursday night. “We are united with the Ridgefield community demanding what our students deserve and we’re calling on the district to do the right thing.”

For more on the strike, check out The Columbian.

Donate to Help Us Cover the Growing Strike Wave

Across the country, we are beginning to see an uptick in strikes this fall. In many ways, it reminds me of previous strike waves that were ignored by the mainstream media.

We have tracked over 2,200 strikes since the beginning of the pandemic in March of  2020. Tracking strikes is hard, intensive labor, and we need your support to keep this work going.

Donate to help us keep tracking this strike wave.

Please sign up as one of our 721 recurring donors today if you can.

Hundreds of Google and Amazon workers across the country yesterday protested the two companies’ $1.2 billion contract to provide Israel with artificial intelligence that can be used to track Palestinian dissidents.

“We call on every single Google worker that is listening to choose action over apathy,” Ariel Koren, a former Google employee, said as she rallied outside of Google headquarters in San Francisco. “That’s why Google workers are speaking out today and saying ‘Drop Nimbus.’ ”

The action was supported by the Alphabet Workers Union (AWU), which has been organizing Google workers.

“Google & Amazon heard from hundreds of people across the country, in NYC, Seattle, SF, & Durham, including dozens of tech workers, that we will not tolerate our tech being used to facilitate occupation & abuse,” the union tweeted out. “#NoTechForApartheid now & forever.”

For more on the strike, check out Forbes.

In June, Microsoft signed a neutrality deal with Communications of America (CWA), allowing CWA to unionize without interference from Microsoft.

However, an official with the UNI Global Union Federation, which is funded by CWA, says that CWA’s relationship with Microsoft led to the group removing Microsoft from a report critical of tech companies that do business with defense contractors. The Intercept has the story:

“According to Tech Inquiry, the sponsors of the report killed the project over political considerations. The same UNI official who spoke to Tech Inquiry this month explained that Microsoft’s pledge to allow the process of organizing, which could mean “thousands [of workers] are able to organize unions and win collective bargaining agreements,” had placed CWA in a tough position. Poulson did not want to reveal the specific union official’s identity, since it was clear he was serving as a messenger.

“I really don’t want to evoke the contract language, and bury this paper like, I feel like that would be fucked up and a disservice to the world,” said the UNI official. “But by the same token, there’s just, we cannot let you have our name in this document and jeopardize our relationship with CWA, CWA’s relationship with Microsoft, the Activision workers’ right to organize, my job, like, it’s just too much. It’s too much, it will never stand. I will be fired.”

For more, check out the Intercept.

Out of Respect for Death of Queen, UK Union Call for Strikes to Be Called Off.

In the United Kingdom, several major unions have called off strikes this week over the death of the Queen. The BBC has the story:

“ The TSSA rail union has also cancelled planned industrial action for September and said it would be ‘respecting the period of public mourning’.

The Trades Unions Congress said it would postpone its annual congress until later this autumn following the death of the Queen.

A spokesman said it was ‘as a mark of respect’ and recognised ‘her many years of dedicated service to the country’.

Staff in the CWU, which represents postal workers, had been on strike on Thursday. But the union cancelled Friday’s planned walkout after the Queen’s death was announced. CWU general secretary Dave Ward said the action had been cancelled, ‘following the very sad news of the passing of the Queen, and out of respect for her service to the country and her family’.”

Alright folks, that’s it for today. Donate to help us keep tracking this emerging strike wave.  And please, if you can, sign up as one of our 721 recurring donors today.