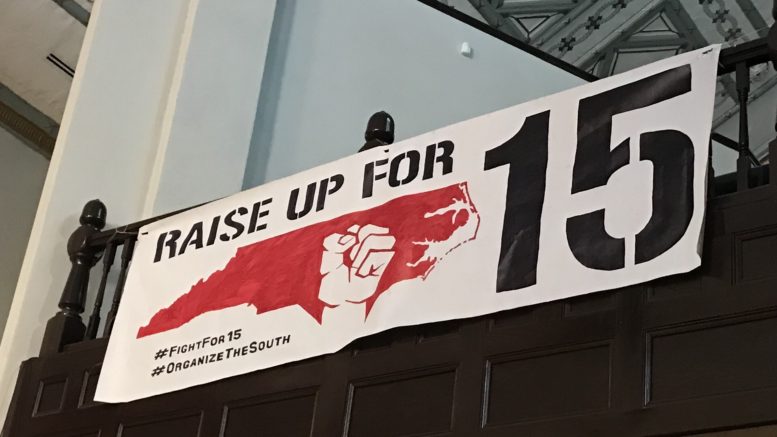 Payday Senior Labor Reporter Mike Elk has teamed up with The Guardian once again to cover the expanding movement to organize the South.

In Durham, North Carolina, Elk writes for The Guardian about the movement to push back against so-called “pre-emption laws” that block progressive enclaves in the South from enacting higher minimum wages law. He looks at how and why the Fight for $15 is starting to invest in organizing poor rural Southern whites in North Carolina.

Check out the link here.

Here is a preview of the story:

“These laws are denying the legacy of King and denying human rights,” said Abdul Burnette, a cook at Popeye’s who has worked in the fast-food industry for 20 years. “It’s not fair.”

Without these laws, activists say that they could probably enact $15-an-hour minimum wages in cities like Durham. More than 100 employers in the city have already voluntarily agreed to adopt a living wage for their employees as part of the Durham Living Wage campaign. In 2016, Durham city council passed a law raising the minimum wage for all city employees to $15 an hour.

Many say that political support exists to extend the wage increase throughout Durham and other cities across North Carolina. However, Republicans, who hold a supermajority in the state general assembly, passed a state law in 2013 that forbids municipalities from raising their minimum wages above the statewide minimum wage of $7.25.

The story in Durham mirrors that in progressive urban enclaves across the south, where activists feel they could pass $15 an hour if only their cities were legally able to do so. The pre-emption laws are part of a growing trend by anti-union forces to stop the Fight for $15 in the main cities where Democratic voters control government. Twenty-three states now have pre-emption laws banning cities from passing laws increasing the minimum wage”.

Check out the full story here.

Then if you can contribute to us so we can keep putting gas in the car to drive around the South and talk to workers.

Thanks for all the support and solidarity!

Melk
Mike Elk is a member of the Washington-Baltimore NewsGuild. He previously served as senior labor reporter at POLITICO and has written for the New York Times.