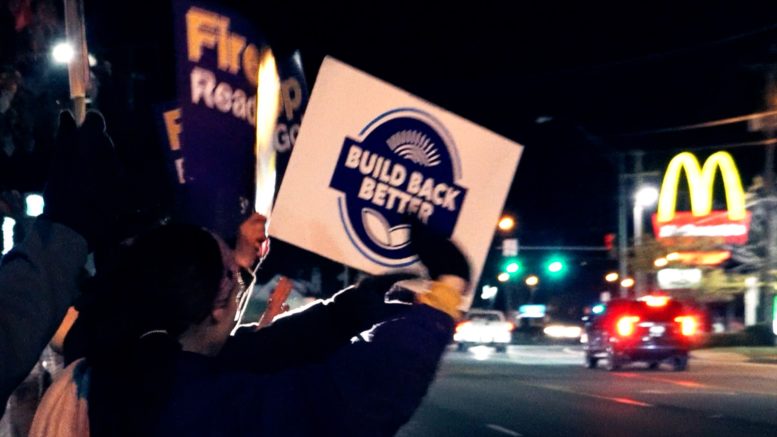 HUNTINGTON, WEST VIRGINIA – In the parking lot outside of Cabell Huntington’s emergency department, workers have gathered in front of a fire bin. Heather Jordan, a middle-aged secretary, approaching retirement age at the hospital, is standing with other workers trying to warm themselves as the temperature drops into the 30s.

It’s a freezing cold Wednesday night on the first day of the strike at Cabell Huntington Hospital, where more than 1,000 workers are participating. For Jordan, who participated in a strike at the hospital in 1998, it’s bringing back a lot of feelings.

“Kind of feels like deja vu,” Jordan says. “It feels very powerful. Just to stand together with my union brothers and sisters.”

Huntington, the largest city in West Virginia, whose population hovers around 47,000, is a city with a proud union history. The Ohio River Valley town is now writing a new chapter in its history as these 1,000 healthcare workers, SEIU 1199 WV/KY/OH members, are on strike at Cabell Huntington Hospital. Three miles down the road, another 500 workers are on strike at Special Metals.

The town has already rallied behind the striking workers, even helping a group of 50 machinists at Sulzer Pump win an improved union contract following a two-week strike at their employer.

“This is union territory,” says Zan Dick, a 34-year-old certified nursing assistant whose mother was involved in the 1974 nurses’ strike at the hospital. “You know, you don’t come in here and try to go back to take it over and say, well, you know, we as management know what’s best for you.”

Dick is proud of the union history of Huntington. He says that while many workers feared the blame that would be placed on them by some in the community for striking at the hospital, he points to the success of the West Virginia teachers’ strike in 2018 that helped persuade many workers that the public would rally behind them like the how public in West Virginia overwhleming backed the teachers’ strikes.

“I think that teachers, that was a big portion of it,” says Dick. “And seeing the teachers get out there and do that and see their support kind of emboldened you because you’re thinking like, if the teachers can get out there, and they get what they deserve, we came to, you know, anybody can do it.”

Dick is a father of three and has another kid on the way. The hospital’s plan to cut back on health insurance could bankrupt him if he or one of his children becomes sick. He says he is determined to fight back against the hospital as his mother did nearly 47 years ago in 1974.

“We have kept this health insurance the way it is since the 1970s,” says Dick. “They’ve worked so hard for us. And if we take one step back now it’s gonna be five, ten times harder to win back. We have to make a stand in the dirt here.”

As an essential worker, Dick worked long, frightening hours at the hospital during the pandemic. Like many hospital workers, he feels the hospital betrayed many workers there.

While many workers say they feel betrayed by the hospital’s push to cut workers’ benefits, pay, and holiday time-off following the pandemic, they add that a new sense of solidarity emerged among workers.

“It really brought us together,” says Jordan. “Everyone — nurses, support staff, maintenance staff — we all lived through a very scary time together and we supported one another. There is a new sense of solidarity between us because we were there for each other during the pandemic.”

Workers say that sense of solidarity is leading them to overcome the fear of taking on an employer like Huntington Cabell Hospital.

On the picket line last night, workers waved SEIU signs reading “Build Back Better.” Initially, unions had printed the signs for rallies to call on Senator Joe Manchin to support the “Build Back Better” reconciliation bill. However, some union members, who weren’t plugged into national politics, discovered the signs and thought they made a catchy slogan.

Workers feel that they deserve to “build back better” together from the collective trauma and pain that many strikers felt when working together in the hospital during the pandemic.

However, unlike other hospitals who used the federal CARES Act to give their workers bonuses and raises, Cabell Huntington Hospital, despite receiving $40 million in federal CARES Act dollars, did not. As a result, many health care workers left the hospital to work at other hospitals in the region where the pay was better. This led healthcare workers to face another understaffing situation.

“It’s just terrible to be so understaffed and see patients in pain and not be able to help them,” says Dick, tearing up as he describes his frustrations working with patients learning to walk again following back surgery.

But workers on the picket line in Huntington are determined to make their hospital better, to “build back better” together as a union. And Wednesday night on the picket line, the mood was electric with horns constantly blaring along Hal Greer Boulevard as workers screamed and waved their signs.

“This is a big union town,” says Jordan as cars, drive blasting on their horns in solidarity! “What’s amazing is that once another union is on strike, the other unions pull together, and they got their backs and it makes me proud.”

Donate to Help Us Cover the Strikes In Huntington, West Virginia

Be the first to comment on "1,000 W.V. Hospital Workers Strike to “Build Back Better”"