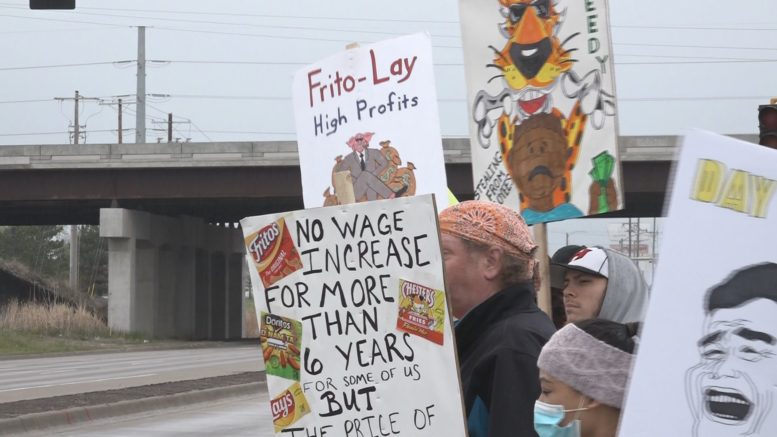 Greetings from the Burgh, where we are struggling to catch up with all the strikes that happened over the holiday weekend.

While we mainly took the weekend off to relax, we kept receiving reports of strikes, with at least 10 strikes happening between last Friday and today.

Donate to our special Strike Tracking Fund as we are seeing the growing retail workers’ walkout movement pick up momentum.

Sign up as one of our 600 recurring donors today so we can keep tracking strikes.

Lifeguards in Maine Walk Out on 4th of July Weekend

At popular Ogunquit Beach in Southern Maine, 15 Maine lifeguards walked off the job on the Fourth of July weekend.

Veteran lifeguard captain J.P. Argenti argued that it was tough to recruit lifeguards because the pay was so low. But rather than increasing workers’ pay, they demoted Argenti, prompting workers to take a stand.

“We were in a dangerous situation, and that’s the alarm bell I was trying to raise,” Argenti told the Bangor Daily News. “The town officials were not taking me seriously. They decided we’re sick of talking to you, J.P., so they demoted me.”

For more, check out the Bangor Daily News.

In Topeka, Kansas, over 500 Frito Lay workers, members of BCTGM Local 218, walked off the job on Monday.

The strike comes after the union’s membership overwhelmingly rejected the last contract proposed by management as workers say something needs to change at the plant.

One veteran worker even recalled how another worker once collapsed and died on the assembly line. Frito-Lay management simply moved the body away, brought in another worker to do the job, and kept the line running according to the union. For more on conditions inside the plant, check out this Topeka Capital-Journal op-ed by Frito-Lay worker Cherie Renfro.

On Friday, over 2,000 Arkansas Kroger grocery workers voted to authorize a strike in one of the biggest walkouts in recent Arkansas history.

The strike vote is motivated by the desire of Kroger to no longer have to pay into the union’s owned and administered Taft-Hartley healthcare plan. Instead, Kroger wants to change the union contract to stipulate that workers have to switch to the company-owned health insurance plan instead, which would give the company far more power over how healthcare is administered.

Unwilling to accept such a loss of control over their healthcare, 2,000 Kroger workers went on strike on Friday in Arkansas.

“They’re trying to gut that contract that these people have fought for 30, 40, 50 years. And we’re not going to let that happen,” Steve Gelios, president of UFCW Local 2008 told KATV.

For more, check out KATV.

(Correction: Due to misreporting by local TV outlet KATV, Payday initially stated that workers at Kroger in Arkansas had gone on strike when they merely threatened to strike)

Late last week in Santa Maria, California, over 100 farmworkers, employed by West Coast Berry Farms, walked off the job demanding a minimum wage of $14 an hour along with $1.25 for each box of berries picked.

The Santa Maria Times has the story:

Martinez said the workers are not making enough to support their families, and after seeing other workers receive increased pay as a result of demonstrations at local farms such as Rancho Laguna and Hill Top Produce Inc. over the last year, more workers appear to be feeling emboldened to call for change.

“We all know that with minimum wage it’s a little harder to have a stable income,” Martinez said. “Workers are finally able to speak up and not be silenced about the low wages. They see other workers stepping it up to ask for better wages, and it encourages them a little bit more to ask for the same thing.”

For more, check out the Santa Maria Times.

At Arnold Air Force Base in Tullahoma, Tennessee, skilled metal trades workers from a variety of unions, employed as contractors, went on strike against the main contractor NAS–National Aerospace Solutions, LCC and its subcontractor Chugach. The workers say they are striking over low pay and concern about safety conditions.

“What’s the sense in getting a raise that doesn’t keep up with the pace of inflation in a sizzling economy such like this?” AFL-CIO Metal Trades Department President Jimmy Hart told the Tullahoma News.

For more, check out the Tullahoma News.

Hear about a strike or walkout or just want to share some comments? Drop us a line at [email protected]

Donate to Help Us Cover the Growing “Retail Worker Rebellion.”