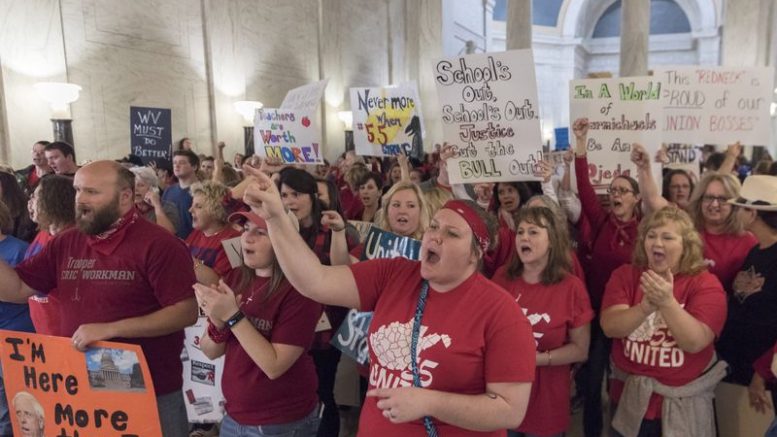 The West Virginia teachers’ strike now entering its second week appears to be inspiring the nation. It looks now like the teachers’ militancy to strike has inspired many of their students as well as teachers in other states.

How far the teachers’ strike spreads at this point is unclear.

On Saturday,  teachers in Oklahoma began holding meetings to discuss a strike and quickly garnered 40,000 fans on their Facebook page when they announced their plans for a work stoppage.

“We are to the point where we have no other option,”  Heather Reed, a teacher in Oklahoma City told KTUL.

Now, Payday Report has learned that teachers in neighboring states along West Virginia’s border with Kentucky and Pennsylvania are considering striking in solidarity with the West Virginia teachers.

Many of the teachers in the district along the border have faced cutbacks in no small part because of delinquent tax payments by coal barons such as West Virginia Governor Jim Justice, whose mining company owes more than $15 million in 6 different states.

The strike wave could spread even further as the teachers and their allies try to build a nationwide movement.

Next week, United Mineworkers President Cecil Roberts and several thousand coal miners and teachers from West Virginia are expected to travel fifteen minutes North across the border for a massive union rally in Waynesburg, Pa. The rally is intended as a show of support for Conor Lamb, who is in close race for the 18th district Congressional seat up for grabs March 13th.

In addition, unions and activists have organized rallies around the nation as the illegal wildcat strike appears to be enjoying mass support.

It does not appear that the strike will be resolved anytime soon as many teachers have stated that they are prepared to remain absent from work for at least another week.

This weekend, Senate President Mitch Carmichael rejected a deal previously agreed upon in principle, which would have given teachers a 5% raise. Instead, the Senate passed a deal giving teachers a 4% raise. This led the teachers to announce they would continue their strike.

“At this point, the three organizations announce that we are out indefinitely — we will not accept the 4 percent,” said Dale Lee, president of the West Virginia Education Association, speaking on on behalf of the three striking unions.  “Until this bill passes at 5 percent, we will be out indefinitely.”

Donate to Payday To Help Us Pay Our Travel Expenses While We Keep Covering the Teachers’ Strike!