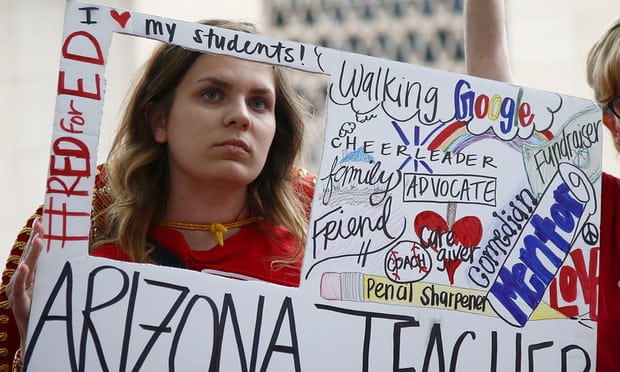 (The week-long strike led to the closure of schools across 110 districts, affecting 1.1 million public school students in the state. Photograph: Ross D Franklin/AP)

Over at the Guardian, Payday Senior Labor Reporter Mike Elk filed a dispatch for the Guardian from the Tuscon May Day protest, where teachers are winding the first-ever statewide strike in Arizona history:

“We’re teachers and we do everything that we are supposed to do. Teachers become teachers, [and] we don’t rock the boat. When people ask us to do something we do it. We’re polite, we’re not rabble-rousers,” said 57-year old Mario Garcia, a teacher at Mary Belle McCorkle elementary school in Tucson.

Now, Garcia said he was seeing a major shift.

“I see so many people that you would never expect to see at a protest. Something has changed.”

Veteran teachers said that their colleagues, once apolitical, are quickly turning into activists.

“Teachers don’t talk about these sort of things. We talk about our students every day, but we don’t [usually] talk about how we are underpaid and poorly treated. Now we do,” said 54-year-old art teacher Lisa Bradford. “It’s really exciting, because instead of being passive, as teachers have been in the past, we’re being assertive.”

Be the first to comment on "‘We’re being assertive’: Arizona teachers feel new power as strikes set to end"