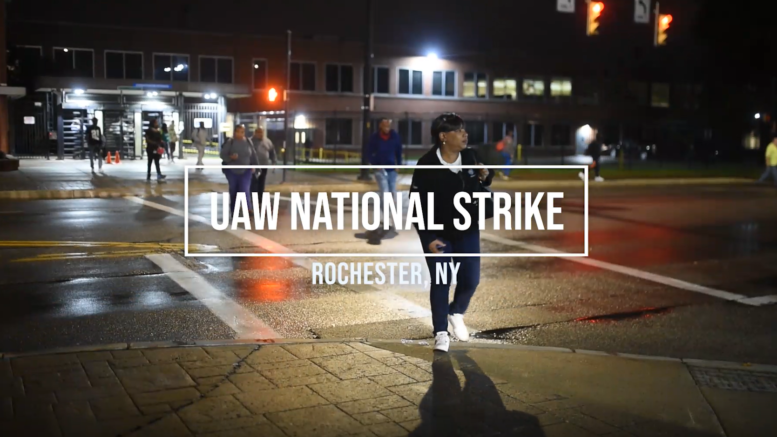 Mike Elk and I went on the road the moment that we heard that the UAW/GM strike was going to happen. 12:01 AM we were standing in front of a GM auto parts plant in Rochester, NY. Other than a lonely local TV news reporter the two of us stood in front of the plant’s entrance waiting for the workers to leave. 12:15 rolls by… 12:30… and then finally at 12:35 AM UAW workers started pouring out throughout the gates.

The local newspaper wouldn’t even cover the strike for days. Here’s our first report from the ground of the still continuing UAW strike.

UAW Local 1097 President Dan Maloney was out on the line in the early morning (or was it late evening) walking the picket with other workers. We talked to him about the status of the strike and more but it was his pointed remarks on the President that stood out.

Mike gave his quick summary of what was happening while workers picketed behind him.

While we were out on the line the first night the strikers were walking very slowly in front of the exits of the management parking lot, maybe a bit slower when it was certain members of the GM staff. This elicited a call from that member of management to the police who were in force (three squad cars that we could see) nearby. The responding officer had a father that worked in the plant and had this conversation with UAW Local President Dan Maloney.

The next day we were back at the Rochester plant talking to workers – this time in a local bar that was offering up their parking lot as a legal spot for workers to park their cars while picketing. Joe was the first worker that we chatted with and had some excellent points. After that we drove over to the local union hall to chat with Dan Maloney again – this time about solidarity.

Retired UAW worker Bishop Herman Dailey describes how the UAW helped him and his charity in Rochester, NY.

Covering the picket line is filled with moments of tears but equally moments of laughs and joy… like this one with a UAW member’s daughter calling for ‘solidarity!’

In Parma, Ohio we spoke to Lynn who was emboldened by the solidarity of her community and her fellow workers in a part of the country hit hard by plant closings and union job losses.

Our travels through New York and Ohio seemed to be summed up to be one of solidarity – one that can be summed up with the over the top metaphor of sharing the pie. This time it was a pizza pie.

We’re set to head back out on the road but we need your support for gas, train rides and motels. Please kick in a couple bucks here to support our important work on the UAW strike and labor. Click here now.

If you’re not convinced watch this short promo video of our work.