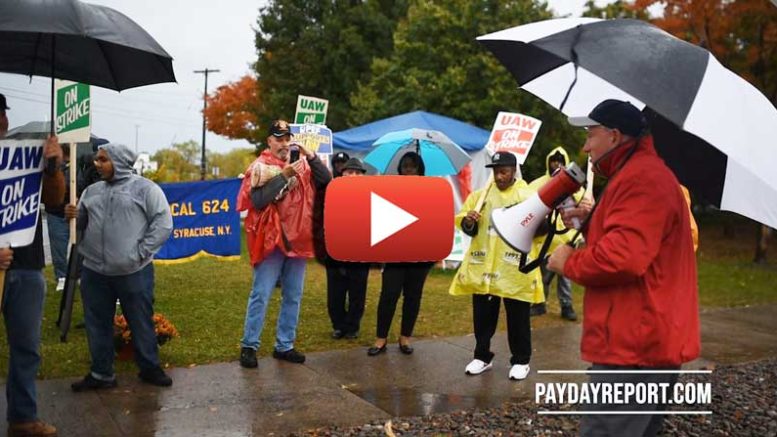 As I write this word is slowly coming in about the potential contract. It doesn’t sound good.

That said, when we talked to the UAW members on the strike line in Rochester, NY the feelings were still positive. While they were ready to get back to work – they were ready and willing to keep the picket line going.

UAW Local 1097 President Dan Maloney told us that he was hopeful as he ran to her flight to Detroit to hear the details of the deal.

Maloney talked to us after the rally that saw members of other unions, candidates and more speaking to the importance of this theoretical deal and the unions in the Rochester area.

After the rally was over we talked to a UAW retiree who had seen strikes like this before and had a perspective on the long term nature of not only the strike but the working for GM as a whole.

As the rally ended the megaphone was handed to a young man, who brought together the myriad of union members, politicians, and journalists.

While the historic UAW/GM strike trudged through 31 days it inspired other unions to take to the picket lines. First, there was the UAW strike at MACK truck and then there was the Chicago Teachers strike. We asked a UAW striker to send a message to those who were about to walk out on the line.

As the night waned on, the leadership headed to Detroit and the politicians went home we talked to a Union member who stood by the street waving his sign as passing cars. Honking cars usually is an annoying happenstance in traffic but when you’re on a picket line 31 days in… it’s a useful way to understand the level of solidarity you have with the rest of your city.

After 7-Year Struggle, Memphis Workers Win Federal Ruling But Will It Help?

Back in Rochester – More Videos from the Picket Line