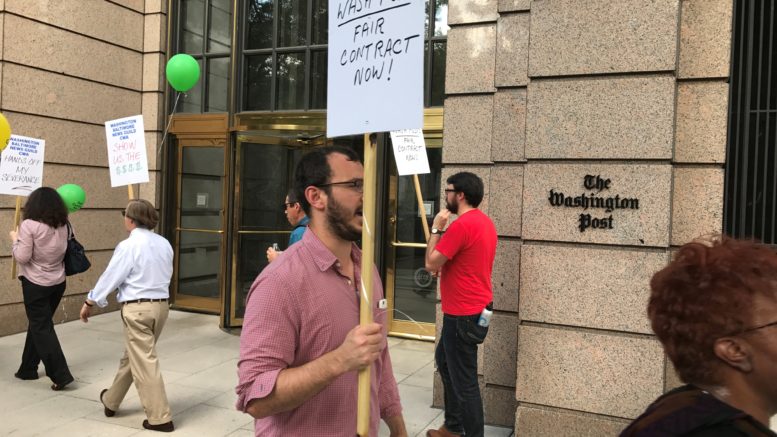 Washington, D.C. — In 2016, Jeff Bezos, the CEO billionaire owner of Amazon and the Washington Post, closed the paper’s historic headquarters on 15th Street made famous by the film All the President’s Men.

In a symbolic move, Bezos opened a new state-of-the-art office on K Street in downtown Washington, D.C. The new headquarters was seen as a positive sign of the changes occurring under Bezos and his attempts to make the Post more competitive in the digital age. By all accounts, both union and non-union, Bezos’ investment in resources and in hiring hundreds of new reporters and multimedia specialists made the Post profitable once again.

Today, Bezos was met with the first picket line outside his new headquarters as more than 50 union members demand a fair contract, while the two sides are locked in a tough contract battle.

“[The] company is now making money. We have captured so many page views that we are getting up into CNN territory,” says Washington Post NewsGuild Unit Co-Chair Fredrick Kunkle, a transportation reporter.

“We are becoming one of the most dominant news platforms on the whole planet,” says Kunkle. “It’s the people who helped get them there. We just want equity—we want fair pay and better retirement benefits.”

While only a small fraction of workers pursue private right of action over firings at the Post, the threat of action often helps workers get severance packages much larger than those stipulated in the Post’s current contract language.

By denying workers severance if they want to sue, management at the Post would be given additional power to fire whomever they please, according to the union, as recently fired workers strapped for cash may be tempted to take severance in order to meet immediate needs instead of taking the company to court.

Some fear the new severance language could open the door for the purging of union activists.

“Everything he has shown us so far is that he is not really interested in retaining people,” says Kunkle. “He does want a workplace that has a lot of churn to it, where people have no loyalty to the company and the company has no loyalty to them, and it’s basically almost a libertarian sort of model of work: ‘All we owe you is a paycheck.’”

Recently, Kunkle himself was formally reprimanded in writing and threatened with firing for writing an op-ed in the Huffington Post criticizing Jeff Bezos’ management practices at the Washington Post.

According to the Huffington Post, prior to publishing the article, Washington Post Deputy Editor Tracy Grant met with Kunkle and informed him that they would not allow him to do so. After its publication, Grant formally reprimanded Kunkle.

The union has filed an unfair labor practice against the Washington Post with the National Labor Relations Board. The action taken by management against Kunkle has mobilized many members at the Post.

The fight between the Post and its union represent a turning point in the media politics of D.C., where more than 2,800 journalists are employed, according to the Bureau of Labor Statistics.

Even on the occasion of the 100th birthday of the Post’s late Publisher Katharine Graham’s 100th birthday in 2017, the newspaper ran an article praising Graham’s role in busting the 1975 Pressman strike. (See Pete Tucker’s excellent longform profile of the 1975 strike.)

Graham’s near-icon status as the newspaper publisher that took down Nixon during the Watergate scandal enabled her to persuade famed journalists like Bob Woodward to cross the picket line in 1975. Graham was viciously anti-union, even, at one point, using a helicopter to fly scabs onto the roof of the Post’s building to get them to the office.

Later, Graham successfully pushed a union contract on the Newspaper Guild shop, which forced the publication to become an open shop despite D.C. being a union-shop city.

For decades, being pro-union was not popular in the newsroom at the open-shop Post or in the many newsrooms located in the nearby “right-to-work” Northern Virginia suburbs.

As a result, the Post bled members, while young, digital-savvy journalists bought management’s line that the NewsGuild was hurting the paper’s profits by resisting digital innovation.

At the end of the Graham Family’s ownership of the Post in 2014, slightly less than 40 percent of workers joined the union.

“I would say that, a few years ago, the rap was that we were getting all these younger employees, that they were disaffected and didn’t understand the union movement,” says Kunkle.

One of the highlights for Kunkle has been seeing young women emerge not just as leaders in the newsroom, but also in the union.

“Some of the most dedicated in our unit right now are people like Julie Zauzmer. She has helped organize a systematic way of getting people signed up, and she has been doing gangbusters,” says Kunkle. “Jenny Rogers, who is a young staffer, led the way on doing a pay and equity study. We are doing great among young staffers now.”

In the lead-up to the contract fight, the union has begun gaining members. In the last 6 months, the union has gained 80 new members at the Post, growing to an approximately 900-person bargaining unit.

The increase in union membership comes at a time when digital media unions are becoming more popular in the industry as a whole; over the last two years, more than a dozen digital media outlets have organized, and unions have won first contracts at Vice, Huffington Post, and Gizmodo.

“I think there are some young people who are not as informed—as they maybe haven’t worked in an unionized newsroom before and they don’t know as much about how it works,” says Zauzmer, a religion reporter at the Post.

“Jeff Bezos is our friend,” says Washington Post Metro reporter Justin Moyer. “I wouldn’t have my job if it weren’t for Jeff Bezos.”

Young activists at the Washington Post say a delicate balance is being walked by many to not appear opposed to the type of digital change that has led the Post to rebound.

“There are a lot of very specific things when we have [organizing] conservations with new members—it’s not about whether they are satisfied with Jeff Bezos or the Post,” says Zauzmer. “It’s about: ‘Hey our 401k match could be better.’ ‘Hey, maternity leave could be better.’ They are looking for very specific ways to improve the workplace they  already love.”

“We just keep saying that it’s wonderful what Bezos has done,” says Kunkle. “My mantra is: We want the Post to prosper, we want the people here to prosper, and that has to mean that you have some modicum of job security.”

The showdown at the Washington Post will prove whether Bezos is truly taking the Post in a new direction or simply behaving like the print bosses of the old days.

Full Disclosure: Payday Senior Labor Reporter is an associate member of the Washington-Baltimore NewsGuild. In 2015, he was illegally fired for union organizing as the senior labor reporter at Politico.

The News Guild has no editorial control over Payday Report. All articles are independently approved by Payday.

Donate to help Payday continue to cover the struggle for a fair contract at the Washington Post.