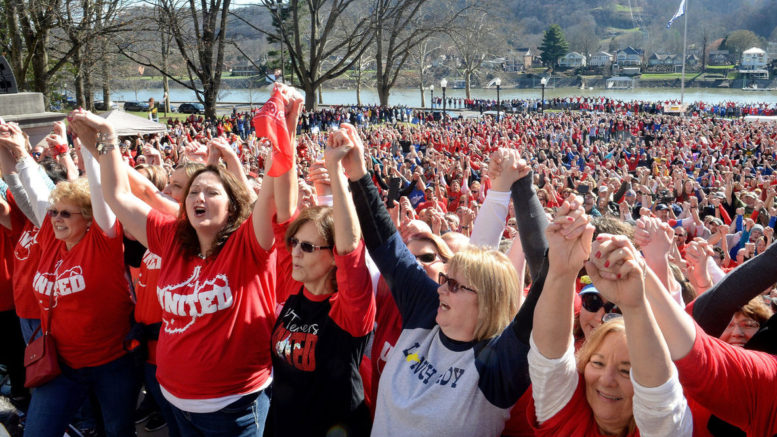 5,000 Teachers Rally on the Steps of the West Virginia State Capitol (Charleston Gazette-Mail)

In addition, West Virginia Governor Justice vowed to veto any bills that would fund charter schools, strip teachers of their seniority, or reduce or remove the deduction of union dues from their paychecks even if those dues are applied to political work.

The deal also will freeze all out-of-pocket health care costs under the WV Public Employees Insurance Agency (PEIA) for a full 19 months. In order to prevent any further protests, the administration can also provide extra employee benefits such as retirement plans, stock options, rewards (like employee gift cards), and bonuses.

The deal will also appoint a task force composed of state officials as well as teachers and public employee union leaders that will propose fixes to PEIA by October. Union leaders hope that if the state legislature is unwilling to take action on shoring up PEIA in October, it will help them to turn out their membership at the polls in November.

“Today, right beat might in the truest tradition of Mother Jones. That victory is a testament to the voice and determination, the resilience and compassion, and the collective power and organizing of the educators of this state,” said AFT President Randi Weingarten in a statement.

Most teachers are likely to return to work now that the deal is struck. However, the possibility for additional action remains as teachers have rejected such deals in the past. So far, no county-wide group of teachers has announced an intention to remain on strike now that a deal has been announced.

Be the first to comment on "Union Leaders Celebrate Victory as W.V. Governor Signs 5% Raise for All Public Employees To End Strike"