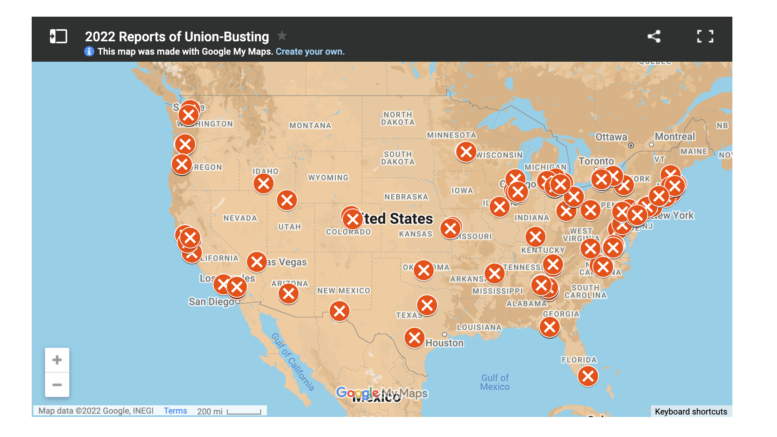 HELENA, MONTANA – In his home office a few miles from Montana’s State Capitol in Helena, LaborLab Co-Founder Bob Funk checks Department of Labor filings to see if there are any new union busters.

“I am probably one of six people in the country who check these DOL filings regularly,” says Funk.

Funk’s effort is part of LaborLab’s new Union-Busting Tracker that launched in late 2021 in order to give the labor movement a fuller picture of the anti-union forces that workers are fighting in union drives.

In January of 2022, twice the number of workplaces filed for union elections than in January of 2021, and activists expect to see that energy continue. Still, with workers mobilizing in record numbers, employers are fighting back.

“Employers are scared of workers organizing and union busters are taking advantage of this to make big bucks,” says Funk.

While an Economic Policy Institute report found in 2019 that union-busting is a $340-million-per-year industry, Funk says the industry is much larger since so much union-busting goes on in the dark.

“Our goal is to really shine a light on the least regulated industries in the United States: the union busting industry.”

Through tips from readers about what organizing drives union busters are fighting and limited public filings, LaborLab has built one of the largest online databases of union busters in the U.S.

By tracking union busters and their tactics, union advocates say that workers can better prepare themselves to fight against the tactics used to fight union drives.

“The ‘union avoidance’ industry is a cancer, and the more workers know about it the better,” says University of Wyoming Labor Law Professor Mike Duff. “By getting [workers] to understand earlier in the process that a sophisticated anti-union campaign is about to be unleashed upon them despite the employer’s claims of being neutral.”

So far, the site has identified the 135 anti-union campaigns through online tips from readers and DOL filings. However, Funk also estimates that is a severe underestimation, arguing it would be easier to track union busters if the Biden Administration implemented an Obama-era rule change that required more union busters to register with the federal government.

In March of 2016, the Obama Administration finalized a “persuader rule” that would have required all anti-union consultants employed during union campaigns to register with the DOL. However, the Trump administration nixed the rule early in their administration.

Under current federal rules, union-busters aren’t required to register if they claim that they aren’t directly communicating with workers voting in union elections. However, most anti-union consultants don’t talk to workers and instead focus on training frontline supervisors to hold captive audience anti-union meetings.

Currently, the “persuader rule” is included in the PRO Act, which has languished as part of the budget reconciliation process in the Senate.

LaborLab hopes that by drawing attention to the union-busting industry, they can help push the Biden Administration to issue a new rule requiring all anti-union consultants to register with the DOL every time they work an anti-union campaign.

In addition, LaborLab’s Union-Busting Tracker is now raising money to bring legal complaints against union busters, who directly interact with workers, but fail to register with the DOL.

“If we can get DOL to go after [union buster’s] failures to report, it might bring more attention to the other 90% of activities that go completely unreported,” says Funk.

With workers on the march in unprecedented numbers, Funk says it feels it’s more important than ever that workers know who the union busters are that they are facing.

“Workers deserve to know when their employers hire a union buster and so does the public.”