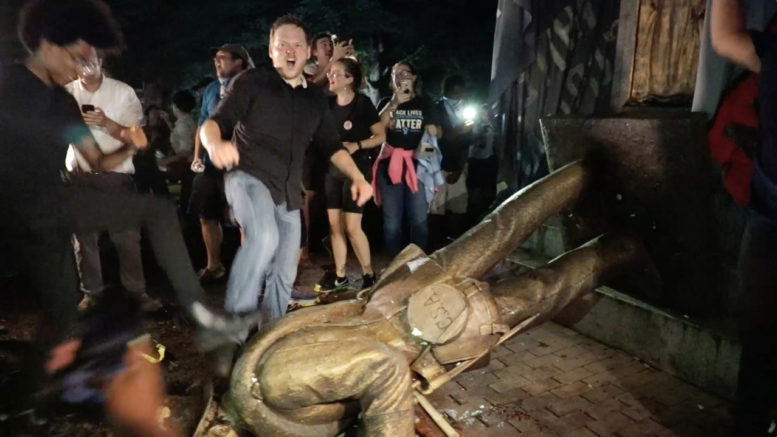 Greetings from the Burgh, where it is very a rough Payday for Melk

Folks, if you have been thinking about donating to Payday, this week would be a good time to do it.

Due to an invoice snafu at the Guardian, my paycheck is late this week putting me in the position of being unexpectedly broke when I had been hoping to have a fun week.

So, if you can, donate today.

Earlier this week, 79 teaching assistants at the University of North Carolina announced that they were going on strike after the school’s board of trustees voted to reinstall the controversial Confederate monument Silent Sam and construct a $5 million history center on campus in which to place the monument.

The group also was protesting the decision of the university to create a $2.2 million “protest platoon” to monitor protests on campus. The group is calling for the administration to sit down and discuss a series of shared grievances over racial injustice on UNC’s campus.

(To read the full demands of the group, go to SilenceSam.com)

The strike by teaching assistants will delay more than 2,000 final grades from being entered.

The group’s officials say that they plan to continue in the strike until all of their demands are met.

“Considering that UNC students should not be expected to continue their studies, take exams, and live on campus under this racially hostile and dangerous learning environment; that faculty across departments have signed petitions condoning student activism and condemning the University’s support of Silent Sam; and the threat that increased policing of student protests and the continued presence of a Confederate monument on campus poses to First Amendment rights and physical safety, respectively, we call on all UNC TA’s and faculty to withhold grading final exams,” said the group in a statement released on its website SilenceSam.com

For more information on the demands, go to SilenceSam.com

As militancy picks up at Southern University, adjuncts at elite Elon University in Elon, North Carolina are protesting

Last week, a group of 250 adjuncts at Elon University filed a petition with the NLRB to hold an election on unionizing with SEIU. If successful, they would be only the second group of adjuncts at a private university in the South to unionize; following the lead of nearby Duke University, which moved to unionize in 2016.

Union organizers say that currently, 46% of the classes at Elon are taught either by adjuncts or instructors that will never be eligible to receive tenure-track permanent positions.

“Some of us do not know whether we will be teaching here from one semester to the next. Some of us struggle to see any long-term career pathway at Elon, despite our commitment to our students and the university,” said the union in a statement announcing its bid. “Many of us do not know how our performance is evaluated or what policies determine whether or not we will be promoted. A few must make hard choices between paying rent and paying medical bills because we don’t earn enough to make ends meet.”

Over in Charlotte, newly elected Sheriff, Garry McFadden made one of his first acts signing a measure to do away with the city’s cooperation with ICE’s 287g cooperation program.

Nationwide, 78 counties participated in the 287g data sharing program with ICE. McFadden hopes that it leads other counties to follow suit.

“And so now we have to show Charlotte that this is a step in the right direction and I need everybody’s help [to show] Charlotte and the nation that we are doing the right thing,” said McFadden.

This week’s Payday goes out to Manuel Duran, Salvadoran reporter and the founder of Memphis Noticias.

In April, Duran was arrested while covering a protest in Memphis. At the time, advocacy groups say that Duran was specifically targeted by police for arrest due to his negative coverage of the local police department. Duran says that he was arrested and pulled out of a group of other journalists covering the March despite the fact that no other journalists were arrested.

After being arrested, the local Shelby County Sherrif in a controversial move honored a request to turn over Duran to ICE authorities.

This week. after nearly 9 months in ICE study, Duran was able to win his release from ICE custody while he awaits the trial that could determine whether he is deported.

“We are grateful and pleased that the court acted to stay Mr. Duran’s deportation so that his appeal may be fully heard,” said the Southern Poverty Law Center’s  Kristi Graunke in a statement. “As a journalist who has dedicated his career to reporting on government misconduct, Mr. Duran faces serious danger if he is deported to El Salvador. We will continue to fight for his freedom and to ensure he receives a fair hearing on his asylum claims.”

This year, Pittsburgh became the first major city in the United States to stop having a daily printed every day as the Pittsburgh Post-Gazette discontinued printing.

Post-Gazette’s management claims that the publication lost $22 million last year and some reporters say they have gone as many as 13 years without any raises.

As the once respectable paper continues its death spiral, the Pittsburgh NewsGuild has become increasingly militant towards management with workers engaging in a byline strike there earlier this year and filing multiple unfair labor practices charges against the company.

On Tuesday, the Pittsburgh NewsGuild picketed the Post-Gazette owner John Robinson Block’s speech at the Rotary Club at the Omni Sheraton Hotel calling him to agree to a fair union contract after 22 months of contract talks.

“This is the beginning of a much more visible presence that we’re going to have, letting the public know of what we’re facing,” Pittsburgh NewsGuild President Michael Fuoco, a reporter at the Post-Gazette, told WESA.

(For more on the growing news deserts in Western Pennsylvania, check out this recent report

Plug news deserts report and put in a growing time of consolidation in Pittsburgh, check out 100 days in Appalachia).

Earlonee Woods,  Producer of Ear Hustle, Gets His Sentence Commuted

Finally, a big congrats this week to Earloonee Woods, the producer of the popular Radiotopia podcast Ear Hustle about life inside the San Quentin Prison had his sentence commuted this week.

Woods had served 21 years of his 30-year sentence on robbery charges when he took up podcasting and said he was thrilled by the commutation decision.

“It’s out of body,” Woods said on Ear Hustle about getting a phone call from Governor Jerry Brown’s office about the commutation. “I’m thinking about my mama, she’s 70. She’s holding on. Just to be … out there with her.”

— Buzzfeed’s Flores went out for a night with a group of immigrants trying to desperately to find a place to cross the border near Tijuana:

They had no choice, Piñeda said. Piñeda believes he has a good asylum claim, but can’t afford to wait months for US border authorities to give him the chance to ask for refuge. The 32-year-old has four kids, including a baby who was a month old when he left home in mid-October, and a wife back home in Honduras who depend on him to make enough money for them to eat. He didn’t believe that he could support his family on what he might make in Mexico in the months he was likely to have to wait.

The decision to strike out for the US on his own, without presenting himself for asylum at a port of entry, is a common one as the US asylum system grinds to a halt from the sheer number of applicants and the Trump administration’s determination to make it more difficult to present a claim. More than 5,000 people are on the waiting list to ask for asylum in Tijuana, with more arriving daily.

Immigration advocates have long complained about the US practice of “metering” — allowing only a few asylum-seekers to make their case each day — and a recent Department of Homeland Security inspector general’s report found that the practice, forcing hundreds of people to wait weeks just to apply, pushes asylum-seekers to cross into the US illegally, instead of going through official ports of entry.

— Southernly Magazine has a long look at groups that are trying to take power by encouraging workers to run for the boards of Southern electric co-ops:

It took Cleotra Tanner more than 60 years to learn he was a partial owner of Twin County Electric Power Association in rural Mississippi. Tanner, a longtime local NAACP leader, said that he never heard about meetings, potential changes to energy sources, or board elections, and was not informed about how the relationship between electric cooperatives and members worked. He only knew the bills were exorbitantly high — and figured there was nothing he could do.

Tanner has lived his entire life in Isola, a small town 80 miles north of Jackson. Two years ago, he was introduced to One Voice, a nonprofit focused on civic engagement in Mississippi that offers free training programs about how to engage, vote and run for boards of electric cooperatives, which are not-for-profit electric utilities owned by their members. One Voice’s goal is to empower people to challenge an unequal racial and economic power dynamic among cooperatives in the state, lower costly utility bills, and push energy leaders to reinvest in rural communities.

“We don’t have any voice in it,” said Tanner, who now leads community meetings for One Voice. “Now we’re enlightening people, and we’re trying to take a stand.”

Since cooperatives are not for-profit, unlike investor-owned utilities, they have more flexibility and can be accountable to members’ feedback. After bills have been paid, leftover money is supposed to be returned to members and used to invest in parks, community centers, and schools.

For more, go to Southerly Magazine.