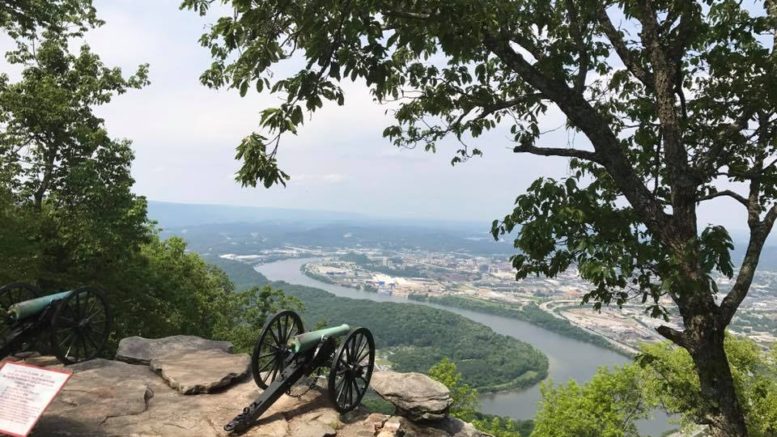 Greetings from Chattanooga, Tenn., where Payday Senior Labor Reporter Mike Elk has been doing research on how an unusual coalition of non-establishment Berniecrats and black voters teamed up to kick out three incumbent Democrats off the Chattanooga City Council this spring.

Look forward to Payday’s story on the big shake-up spurred by gentrification in Chattanooga.

In the early years of its attempt to organize Volkswagen in Chattanooga, the UAW faced criticism for trying to cut a neutrality deal with the company that restricted its criticism of the company.

However, the play nice approach championed by then-UAW President Bob King back in the early 2010s has been jettisoned by his successor Dennis Williams, who took over the union in 2014.

Now under, Williams has embraced regularly criticizing the company. A new, emotional video released by the UAW last week shows Volkswagen workers describing injuries that they have sustained while working in Chattanooga.

In December 2015, UAW took advantage of Obama-era rule changes and won a union election for 180 maintenance workers by a nearly 2-to-1 margin. However, instead of recognizing the union, Volkswagen has gone to court to argue that the Obama-era rule is illegitimate.

Since then, the UAW has gotten much more militant in their tone against the company and dropped the “play nice” approach employed under King’s leadership.

The UAW has opened a new campaign against Volkswagen, calling on investors in Europe and the U.S. to ditch Volkswagen unless it recognizes the union.

This week, the UAW is teaming up with the Association of Ethical Shareholders Germany and the US investment group Change to Win (CtW) to present a countermotion at Volkswagen’s annual shareholder’s meeting in Hanover. The motion denounces the company and calls on investors to vote in a new corporate board that will recognize the union in Chattanooga.

With Volkswagen sales beginning to rebound this year following the bad publicity of its emissions scandals, the UAW is hoping that it can leverage public disapproval from Volkswagen into forcing the company to recognize the union.

Often, corporate campaigns run by unions focus on more than just a company’s labor record, but on issues that affect the entire progressive movement. Just this week at its shareholder meeting in Hanover, Germany, Volkswagen announced that it would not be releasing its internal emission probe.

That fact, if highlighted in addition to Volkswagen’s poor labor rights in Chattanooga, could hurt sales from ethical consumers already wary of the company’s environmental record.

“VW management disregards fundamental labor rights, US labor law and its own code of conduct. It risks a massive damage of its own image,” said Gary Casteel, UAW’s secretary-treasurer, and an Alabama native, said in a statement sent to Payday Report.

Some activists in Chattanooga are hoping that UAW can replicate the large-scale community campaign that it has put in place at Nissan in Mississippi.

In Mississippi, the UAW has organized multi-thousand person marches against Nissan, including the historic March on Mississippi featuring Senator Bernie Sanders. Students from Jackson State and Tougaloo College engaged in civil disobedience at Nissan headquarters to get Nissan worker Calvin Moore reinstated in 2014.

While the UAW used a quiet legal campaign to get African-American worker Jerome Robinson reinstated in 2016, UAW activists in Chattanooga have yet to engage in the kind of wide-scale tactics of civil disobedience and mass community-labor mobilization as pro-UAW activists in Canton.

The UAW could not be reached for comment over the weekend about what their plans are in Chattanooga.

While different dynamics exist between the two plants:  Nissan’s plant in Canton, Mississippi is 80% black, while Chattanooga’s Volkswagen plant is more than 80% white, activists feel that a similar approach specifically tailored to the complexities of the Chattanooga community could work.  However, despite the differences in their regions activists says that such a campaign is as vital in Eastern Tennessee as it is in Mississippi.

“In a hostile political environment, it’s more important than ever that workers feel community support behind them in their push for economic justice,” Michael Gilliland Board Chair of Chattanooga Organized for Action, a community organizing nonprofit founded in 2010 wrote Payday in brunch-time Facebook message. “ I hope the growing success of community involvement in the Mississippi campaign can be replicated in Chattanooga and elsewhere across the South.”

The contributions bring Payday’s monthly average of income to $1,540 a month from 230 different readers.

If a group of workers wants us to do a long form piece, our weekly rate is $1,000 a week plus lodging (Payday used its funds last month to purchase a high-tech $160  Costco mattress, which we have used for stories bylined from North Carolina and Tennessee already.)

Over the past two months, Payday has driven 7,000 miles throughout the South and we are beginning just now to publish some of the long forms stories we captured on this trip.

Email us at [email protected] and let us know – we’re even willing to travel North to show you Yankees how labor reporting is done.

In response to the sustainable growth of Payday, our senior labor reporter called on Payday to raise the minimum wage for all Payday contractors to $25 an hour and then called on his contractors to unionize against him.

“It’s Payday, we’re a publication about people getting paid so, of course, we’re going to pay them well,” said Payday News Coop Inc. Chairman Mike Elk. “To be perfectly honest, I am somewhat amazed at the lethargy my workers are showing in unionizing. If they unionized, Payday would really have a fundraising shtick to persuade people to donate more.”

Sign up today so that Payday Report News Coop Inc Chairman can afford to pay himself as well as his contractor.

While Payday Report News Coop Inc., a Tennesse-based corporation, continues to do good by its workers, mega independent contractor Uber continues to rip off Uber drivers.

The guaranteed rate attracted Uber drivers from all over to come to Louisville to earn a few extra bucks in addition to the fares. However, the Louisville Courier-Journal reports that many workers say the company is now cheating them out of their pay:

I was very angry, and I still am,” said Patrick Welsh, a retired actuary who began driving for Uber about two months ago.

Welsh and other drivers said company representatives promised them at a meeting before the Derby that they would take home the guaranteed earnings. Laurie Ewing, who lives in Lexington but came to Louisville to drive in response to the promotion, also said she expected to collect the full guarantee.

Instead, Uber took its usual percentage – about 25 percent – from the guaranteed top-offs.

Evangeline George, a spokeswoman for Uber Technologies, said in an email that promotions for the Derby guarantees specifically mentioned that they were guaranteed “gross fares.” But she said, “Moving forward, we will work to make these earnings even clearer and simpler based on driver feedback.”

To read more, check out the Louisville-Courier Journal.

Whitewashing of the Black Origins of the Kentucky Derby & Other Longreads

— Smithsonian Magazine recounts the early dominance of black jockeys at the Kentucky Derby, before black athletes and fans were pushed out of the the event. Isaac Murphy, a former slave, won three Kentucky Derbys between 1884 and 1891, becoming a national star in what was then the country’s most popular sport:

Only a few weeks after the interview with Fortune, Murphy’s career suffered a tremendous blow when he was accused of drinking on the job. He would go on to win another Kentucky Derby the next spring, riding Kingman, a thoroughbred owned by former slave Dudley Allen, the first and only black man to own a Kentucky Derby winner. But Murphy died of heart failure in 1896 at the age of 35 – two months before the Supreme Court made segregation the law of the land in Plessy v. Ferguson.

Black men continued to ride successfully through the 1890s, but their role in the sport was tenuous at best. A Chicago sportswriter grumbled that when he went to the track and saw black fans cheering black riders, he was uncomfortably reminded that black men could vote. The 15th Amendment and Isaac Murphy had opened the door for black Americans, but many whites were eager to slam it shut.

After years of success, black men began getting fewer jobs on the racetrack, losing promotions and opportunities to ride top horses. White jockeys started to openly demand segregated competition. One told the New York Sun in 1908 that one of his black opponents was probably the best jockey he had ever seen, but that he and his colleagues “did not like to have the negro riding in the same races with them.” In a 1905 Washington Post article titled “Negro Rider on Wane,” the writer insisted that black men were inferior and thus destined to disappear from the track, as Native Americans had inevitably disappeared from their homelands.

— The Undefeated features a video of the Harlem Derby, an event started by native Kentuckian and current Harlemite fashion designer Rob Owens, who employs the fashion of the Kentucky Derby to connect Harlemites to the event’s black legacy.

Auntie Rosa’s lemonade involved simmering the lemons in water for 30 minutes, which on a hot day could feel like a long time to wait for a drink.

“She would be in that kitchen, and you were not invited in,” recalls Keys. “You would just hear pots and pans. But eventually, when it came out, it was the best thing ever.”

As Nicole Taylor and I cooked those peanut butter pancakes, we found ourselves thinking a lot about what it might’ve been like to cook with Rosa Parks. Did she wear her usual formal outfit in the kitchen, or something more comfortable? Which brand of flour did she prefer? And would she approve of putting buttermilk, instead of milk, in the batter, as Nicole did?

From a region where slavery and sharecropping had made mono-crop agriculture possible — and a state where Senator James Eastland once said that the best fertilizer was the plantation owner’s foot — Mrs. Hamer argued that stewardship of the soil was man’s highest calling. With the help of the singer Harry Belafonte and a charitable group based in Madison, Wis., Measure for Measure, she founded Freedom Farm Corporation in 1969 on 40 to 60 acres of Delta land. The need was urgent, she told Northern supporters: “We must buy land immediately, or our people will die forgotten.”

Freedom Farm aimed to give farmers land to work and poor families food to eat. This bold promise threatened plantation agriculture and its scions. Conservative whites saw cooperative agriculture as a threat to their political and economic power. Across the region, white banks called in loans, white families fired cooks and night riders torched crosses.

Mrs. Hamer was unbowed. “If we have that land,” as she once put it, “can’t anybody starve us out.” By 1971, she had acquired 620 more acres of Delta farmland. She and her colleagues planted snap beans, squash, butter beans, peas and cucumbers.

Mike Elk is a member of the Washington-Baltimore NewsGuild. He is the co-founder of Payday Report and also writes for the Guardian. He previously served as senior labor reporter at POLITICO.