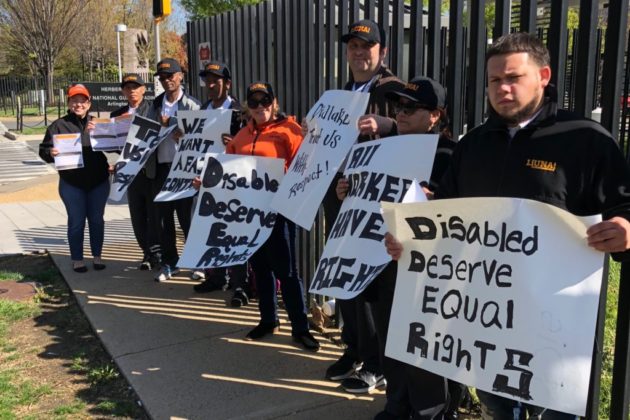 ARLINGTON, VIRGINIA – “We are normal people, we should have a union,” says Samantha Ulloa, a 27-year-old disabled worker employed as a janitor cleaning the bathroom at Army National Guard. “It just makes me so mad”

For nearly a century, disabled workers have complained that they have been treated like second-class citizens when it comes to their rights as workers. Under the 14c exemption to the Fair Labor Standard Act, more than 400,000 disabled Americans, employed in so-called non-profit “sheltered training workshops” are exempt from minimum wage laws and other federal labor laws. Catering to disabilities in the workforce is essential to make sure that everyone has a chance at a career, this doesn’t just mean adjusting the job, it means changing the surroundings too for easier access. This could be creating washrooms (you can visit this website for more information) that have easy door access on properties, as well as adding in ramp systems that can be modified for different disability needs. There is a lot that workers can be helped with.

Now, a non-profit employer, , that specializes in employing disabled workers, Didlake, is asking Trump’s National Labor Relation Board (NLRB) to strip some disabled workers of the right to unionize.

For more than three years, a group of two dozen disabled workers at the Army National Guard building has been attempting to organize with Laborers Local 572. The workers say that they are treated like second-class citizens compared to their non-disabled colleagues often performing the same jobs.

The disabled workers are paid as little as $12.66 an hour and forced to pay $170 a month for inadequate health insurance that often leaves workers with out-of-pocket deductibles sometimes ranging in the thousands of dollars. While non-disabled workers performing similar work at the Pentagon, who are union members of Laborers Local 572, make $15 an hour and receive health care at far cheaper rates.

Despite their disabilities, workers say that they only receive breaks for lunch and are routinely reprimanded for taking breaks when they are having trouble physically completing their jobs.

“They never allow us to sit down, we are just always constantly non-stop working,” says Ulloa, who says that her struggle with epilepsy have been aggravated by the lack of breaks “When I tell them what I am experiencing, they don’t listen to us, which is why I want a union so we can have a voice.”

Deaf workers employed by Didlake say that they are routinely mocked and yelled at by their supervisors. For years, the deaf workers, who make up a third of Didlake’s janitors, have tried to get their employer to hire a sign language interpreter to communicate with them, but the requests have long been ignored. Had they received little support of encouragement and help in the form of resources (like the ones available at EarPros, for instance) and basic support that these employees so deserve, they could have been content with the work that they do and the organization that they work for.

However, when workers attempted to unionize in 2017, their employer did hire a sign language interpreter to persuade the workers not to unionize.

When the workers first attempted to unionize in 2016, their drive was defeated after the company threatened to terminate AbilityOne job coaching services that help many of the disabled workers to maintain their jobs. Many workers voted against unionizing out of fear that they would lose their jobs.

Not dissuaded by the loss, the workers kept organizing and in April of 2017, the workers finally voted to unionize by a margin of 12-6.

However, the company has refused to recognize the union and sit down to bargain a contract with them for more than a year. The company has argued that since the workers are not employed in traditional employment, but rather in a “sheltered training workshops,” were disabled workers are being paid merely as part of a rehabilitation program.

In October of 2016, Obama’s National Labor Relations Board rejected Didlake’s argument that the workers were not eligible to be members of the union. However, now with the Trump Administration solidly in control of the National Labor Relations Board, Didlake is deciding to try its chances with an Administration seen as less friendly to the rights of disabled workers.

Frustrated by Didlake’s refusal to recognize the union, the workers went on strike for five weeks this past spring. The strike attracted widespread support. Senator Tim Kaine (D-VA) marched with the workers. For disabled workers nationwide, the struggle at Didlake became a symbol of the rollback of progress nationwide since Trump has taken over.

During the Obama Administration, disabled workers had made large gains as President Obama appointed a record number of disabled Americans to top Cabinet positions. Under an executive order issued in 2013, President Obama began barring non-profit “sheltered training workshops” from paying workers below the minimum wage. In Congress, a bipartisan coalition of legislators both in the Senate and House pushed to outlaw the practice altogether.

However, President Trump, who on the campaign trail famously mocked a disabled reporter with a congenital joint condition has sought to roll back the rights of disabled workers. In February, Trump signed into law the ADA Education and Reform Act, which would make it more difficult for disabled workers to sue their employers.

“We need people with disabilities to have equal access to unionization rights,” says Ari Ne’eman, a disability rights activist who was an appointee on Obama’s National Council on Disability. “We also need to dismantle a system, which is fundamentally corrupt, the sheltered workshop industry, where the service providers that should be supporting and advocating for people with disability are instead acting in the role of management as an employer.”

Despite their own uphill struggle for a union, the disabled janitors cleaning the Army National Guard building in Arlington, Virginia say they aren’t going to quit.

“I have organized a lot of workers,” says Xiomara Vasquez, “and these workers have a lot more courage than regular workers.”