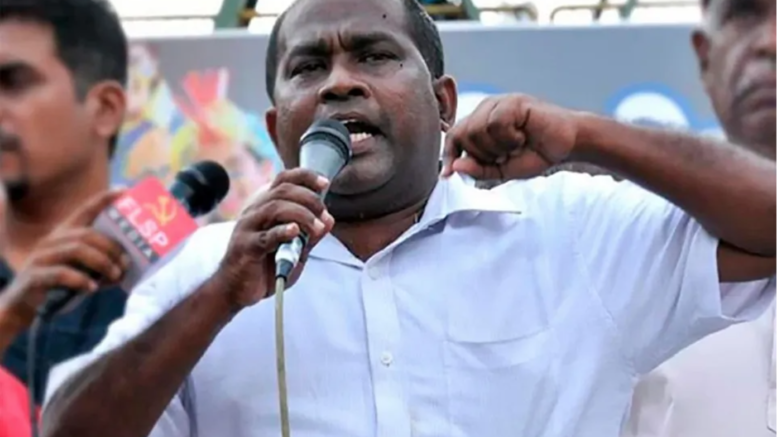 Sri Lanka’s newly-installed president Ranil Wickremesinghe is going after activists, including a union leader, who have been protesting against the current government amid one of the country’s worst political and economic crises in history.

The protestors, who have been credited with bringing down Sri Lanka’s former president Gotabaya Rajapaksa last month, are now the target of Wickremesinghe’s “witch hunt,” as Ambika Satkunanathan, an activist and a former human rights commissioner in Sri Lanka told the New York Times.

President Rajapaska fled to Singapore as a result of the protests.

Dissenters who have been arrested include Joseph Stalin, a leader of a teacher’s union, and Mahanama Thero, a Buddhist monk. They were both at the forefront of the movement. Catholic priest Jeewantha Peiris, another protest fixture, is in hiding.

“The right to protest is a democratic right,” Stalin said in a video on social media as he was being arrested. “What crime have I committed? Have I stolen public money or murdered people?”

Wickremesinghe, who has been prime minister six times and is an ally of Rajapaksa, ordered a violent pre-dawn raid at a protest site outside the president’s office soon after taking the helm in late-July.

Meanwhile, Garment workers in Sri Lanka are struggling to survive amid the turmoil in the South Asian country.

Inflation, frequent power cuts, and a lack of necessities like fuel and food has left the workers, who are mostly women, going hungry.

“There are days when I have stood in long queues for cooking gas, kerosene oil and other necessities — only to come back home empty-handed. Many women workers are walking 3 to 4 kilometers every day to buy medicines and other necessities, and they hardly have a proper meal a day,” one garment worker told labor advocacy group Asia Floor Wage Alliance.

Having exhausted their savings during the first two years of the pandemic, many workers feel trapped by the indefinite crisis happening right now. Wage exploitation by global brands have exacerbated the situation. One garment worker said she earns $69.74 a month — more than twice the country’s $34.87 minimum wage, but nowhere near its $210.89 living wage.

“We have spent hundreds of hours standing in factories and stitching for global brands like Next, Victoria’s Secret, Levi’s, Nike and so on, yet, our wages are suppressed so that brands and their owners can amass huge profits,” Sourcing Journal reported her saying. “I refuse to believe that we did not deserve a living wage for our hard labor. Brands can pay us a living wage, but they choose to watch us starve.”

Sri Lanka is not the only major clothing exporter grappling with soaring prices and power cuts. Bangladesh, another South Asian country, is also facing slowing global demand and an energy crisis.

Workers at Komodo National Park in West Indonesia started a month-long strike this week after the government raised entry fees over 1,800 percent, which could deter many tourists from visiting the popular national park.

The government raised admission prices from $13 to $252 to protect the island’s endangered Komodo dragons by limiting its number of visitors.

But locals say the high fees will destroy their livelihoods, especially when they are still reeling from the pandemic.

“We support Komodo conservation but please come up with a sensible number so we can protect Komodo dragons and so people whose livelihood depends on tourism can live,” said tour operator Servianus Setiawan, one of the 700 workers who is taking part in the strike.

Read more at AFP via France 24

Over 10,000 London Underground and Overground workers will go on a 24-hour strike on August 19th over a “paltry” 5% pay raise. The Underground, commonly known as the tube, and Overground are London’s main train networks across the city and its suburbs.

This would be the fifth time tube workers have gone on strike this year.

The strikes will fall between two 24-hour walkouts by workers from Network Rail – the organization that maintains train infrastructure – and 14 train operators on August 18th and 20th.

“TfL (London’s public transport agency) have had ample opportunity to be transparent about the funding they will receive and to give tube workers the assurances they need. Yet they have totally failed to give those guarantees,” said Mick Lynch, the head of the National Union of Rail, Maritime and Transport Workers, the group representing tube workers.

“And Arriva Rail London, a company swimming in money, refuses to give our members a pay rise that will deal with the escalating cost of living crisis,” he added. Overground staff work for Arriva.

London bus services, which Arriva also operates, could also be disrupted as more than 1,400 bus drivers are set to vote whether to go on strike next month. The union representing them said Arriva, a subsidiary of German transport company Deutsche Bahn, had made profits of £560m ($682 million) from its U.K. bus business in the past decade. Arriva bus services in other parts of the country have already been halted due to ongoing strikes.

SNITIS said union members working for BBB in Reynosa, a border city right across from Texas, were intimidated during a contract vote last month.

They claimed that the vote tally exceeded the number of workers, the ballots were not numbered, neutral observers were absent, and workers were not given copies of their contract until voting day. Workers were also pressured to vote for the contract or lose their benefits, they alleged.

Warehouse workers at Coupang, which has been called the Amazon of South Korea, are demanding that the e-commerce retailer provides air-conditioning in its warehouses so that workers can do their jobs safely.

Intense heat waves have hit countries in the northern hemisphere this summer, and South Korea is no exception. Besides air conditioning in all workspaces, workers want 20 minutes of rest time for every two hours of work.

Previous reports have found working at Coupang grueling. An independent study last year found that 73% of workers reported their work to be more intense than fast walking, while half of the workers say they “always” felt exhausted after their shift. At least nine Coupang workers died in 2020 and 2021, a claim the company has denied.

“Working in the warehouse feels like being inside a boiling pot,” Jeong Dong-heon, one of the workers organizing, told Al Jazeera. Jeong works from 8 a.m. to 5 p.m. and sweats so much salt deposits stick to his shirt. Fighting for air-conditioning is just the first step for better work conditions, he said. “This will be a long struggle.”

Warehouse Workers Serving Supermarket Chain To Strike for One Week

Folks in Scotland and Northern Ireland could be faced with empty grocery shelves as warehouse workers that handle supplies for supermarket chain Sainsbury’s have agreed to go on a week-long strike in mid-August.

Unite, which represents over 300 DHL warehouse workers, said in a statement its members are fighting for a fair pay deal. The German logistics giant pays workers based in Scotland less than those in other parts of the UK, the union said. It also rejected the pay raise offer from DHL, saying it amounted to a pay cut amid current inflation rates.

“Unite will challenge DHL and its mega-wealthy owners. We don’t do our members being treated as ‘second class,’” said Unite general secretary Sharon Graham.

Donate to help us continue to cover labor around the world.