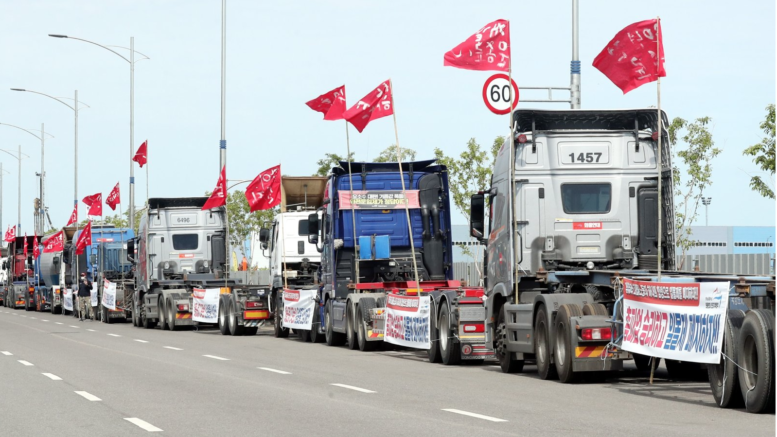 Around 15,000 truckers in South Korea agreed to hit the road again after making a provisional late-night agreement with the country’s transportation ministry that guarantees a minimum wage.

The eight-day strike caused huge delays in cargo shipments — from cars and semiconductor chip components to steel and petrochemicals — costing the export-reliant country about $1.2 billion in production and delivery losses. The country is home to automakers Hyundai and Kia, electronics maker Samsung, and steelmaker POSCO.

The transportation ministry has agreed to extend a freight rate system that was set to expire at the end of this year. The system will ensure truckers get a minimum wage in light of soaring oil prices. The ministry, which has to pass these demands in parliament, will also look into providing fuel subsidies.

But the unionized truckers’ success in this round is no indication of how future negotiations will turn out, labor relations experts told Reuters. The country recently elected the pro-business Yoon Seok-youl as president, and the public is largely unsympathetic towards unions due to their past militant actions.

Read more at Voice of America

More strikes at airports in Europe

Air travel workers are continuing to strike and call for strikes over work conditions, while airports and airlines struggle to cope with demand this summer.

Spain’s Ryanair cabin crew have voted to hold six days of strikes in June and July, Euronews reported, a week after air traffic controllers in Italy and workers at France’s main Charles De Gaulle airport in Paris walked off their jobs.

In an informal poll, British Airways workers have voted overwhelmingly to strike. No formal strike action has been approved yet, but it could cause huge problems for the carriers as the airline’s union represents 16,000 workers. Already, the airline has canceled 8,000 round trips between March and October due to a lack of workers.

Tunisia came to a grinding halt on Thursday after the country’s largest trade union rallied its members to go on strike, Al Jazeera reported.

Airports, public transport, ports, and government offices were closed as a result. All international flights in and out of Tunisia were canceled.

Protestors carried flags and chanted slogans such as “in our life, in our blood, we are with the union.” They were protesting President Kais Saied’s plans to freeze wages and cut subsidies in order to secure a $4 billion IMF loan.

It looks like Amazon’s unionizing energy is spreading to the East.

Ten freelance delivery drivers working for Amazon Japan have unionized, claiming they have been overworked by the company, according to Kyodo News. The corporation adopted a new artificial intelligence system last year to determine each driver’s coverage area and number of packages delivered, dramatically increasing drivers’ hours. The effort was prompted after one of the drivers got into an accident last year.

“The huge workload is stressful and we cannot handle it,” one union leader said at the press conference. “If we don’t correct this, then drivers may die on the job.”

The union has sent a letter to Amazon asking for work conditions to be improved, as well as compensation for the pay that is deducted when packages are damaged during delivery.

Only 6% of domestic workers globally have adequate safety net

Domestic workers make up one out of every 25 employees, or 2.3% of workers worldwide. These are people who provide care services to families, and the majority of them are women; a fifth are immigrants.

Of an estimated 75.6 million domestic workers globally, only 6% of them have comprehensive social security coverage that includes medical care, sickness, unemployment, old age, maternity, and other benefits, the International Labor Organization (ILO) wrote in a report released this week.

Asia-Pacific and Arab states provide the least amount of protection. Only 27.9% of Asia-Pacific countries and 3.8% of Arab states offer at least one social security benefit.

Domestic workers make up one out of every 25 employees, or 2.3% of workers worldwide. These are people who provide care services to families, and the majority of them are women; a fifth are immigrants.

Besides the lack of social security protections, domestic workers are also vulnerable to discrimination in general. For example, in Singapore and Malaysia, domestic workers are not allowed to marry a local resident. In Singapore, where these workers are considered “unskilled” or “semi-skilled,” they are also banned from getting pregnant. And while Japan and Thailand have anti-pregnancy discrimination laws, less than half of those polled in a separate ILO survey supported the idea of letting pregnant migrant workers continue working.

Alright folks, that’s all for today. Donate to help us cover our travel costs to cover the presidential election in Brasil this spring. Please if you can, sign up as one of our 694 recurring donors today.