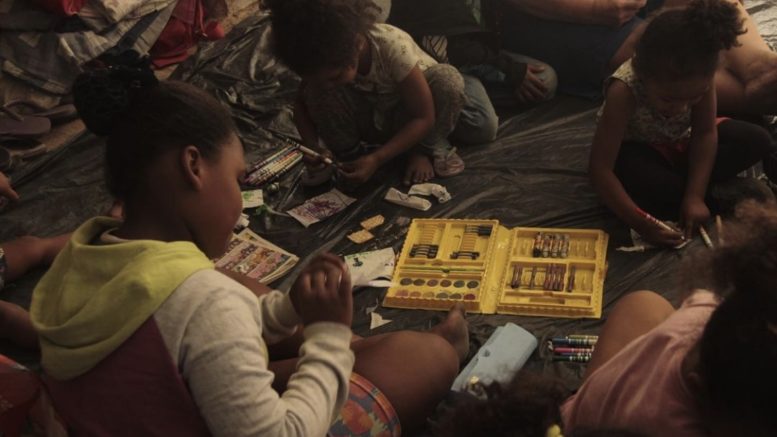 RIO DE JANEIRO, BRASIL – A few weeks ago, I visited the Luiza Gama occupation in downtown Rio. More than 70 families had taken over a building in downtown Rio that had been empty for more than ten years. The family had first occupied the building in mid-November and was gaining popular support when I visited in early December.

“Many of these families live in precarious conditions,” says Adrian Santos, an organizer with the Movement of Neighborhoods & Favelas, who organized the occupation. “Many of these people live with clean water, sometimes sleeping as many as 5 people to a room. Many of these people are having to commute three hours round-trip everyday to get to work”.

The occupation was part of a growing movement of activists occupying buildings throughout Brazil as homelessness rises.

The landless movement inspired many in the growing Movement of the Unhoused to begin occupying their buildings. Through fights that could often last up to a decade in court, the movement has had many successes, with dozens of buildings in Rio becoming owned by previously homeless residents.

During the administration of Bolsonaro, many movements like this found new energy as people looked to mutual aid instead of the government for help during the pandemic.

“I think that the Brazilian people, especially during these four years, have understood that the only people who can solve their problems are themselves,” says Santos.

With Lula taking power on January 1st, activists think it’s time to accelerate occupations like this.

“The government of Lula that was elected was a government of coalition, of which several bourgese segments of Brazilian society are present. Its a government that is in dispute,” says Santos.” We think that Lula opens up an important space from the point of view of the field, from the institutional point of view, but that social movements need to continue doing this, that we are carrying out occupations, demonstrations, including putting pressure on the government itself”.

For weeks, the occupation in downtown Rio attracted support from various movements.

“More than 500 people have passed through here to help in the past 2 weeks,” says Santos. “People have been stopping by to drop off food for people to eat. We have actually been receiving more food than we can use and have been donating it to other groups”.

However, less than a week before Christmas, the government informed the occupation that they had to live. Approximately 70 families were evicted from the building as Christmas approached.

“These families are going to be in the street at Christmas time because we don’t have policies that deal with homelessness,” says Santos. “But we have to keep occupying buildings and build solidarity to overcome this problem of homelessness.”