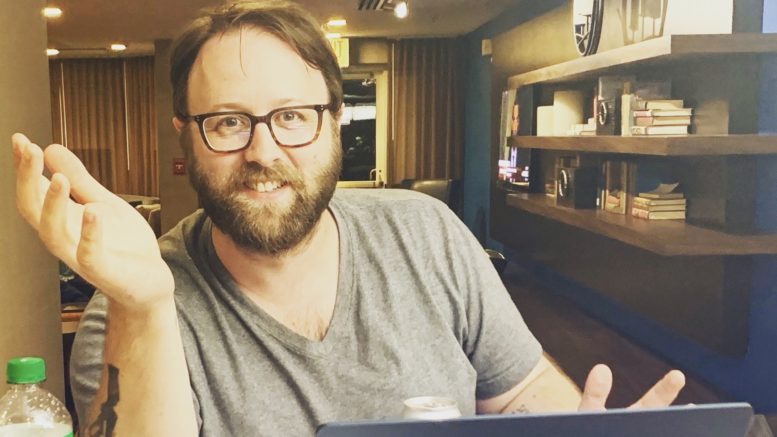 As we prepared for our cameraman Zach Roberts to get to Pittsburgh today for our Labor Day socially distant picnic fundraiser and to cover Clemente Day, we received word that Roberts was shot repeatedly by “pepper pellets”. Small projectiles that hit like rubber bullets and release tear gas.

“Hit again in the back I was shooting with a telephoto lens at an extreme distance completely off the roadway. They’re directly targeting press now well and have been” tweeted Roberts last night at 11:14 PM.

Roberts has played an essential role in Payday’s coverage of the GM strike producing 28 videos and 31 videos from 4 states last year during the strike and, filming our viral video depicting the moment that Rochester GM workers walked off the job.

Roberts footage of the 2017 Charlottesville March resulted in the conviction of 3 Nazis for the beating of a Black man Deandre Harris. Under threat of a gun, Roberts stood his ground and captured the evidence needed to convict his beaters.

Zach and I have spoken about this and the best way to help Zach after these tough traumatic stories is to get him more work. He asked me to fundraise to get him some more work at Payday here in Pittsburgh and to extend his stay in Pittsburgh if need be to relax.

While here in Pittsburgh this week, Zach will be helping us make videos on Clemente Day next week, the 2nd anniversary of Tree of Life Synagogue massacre, COVID’s effect on workers in communities of color in Pittsburgh, and to a film our fundraising video.

Zach has asked me to ask people to donate to Payday so we can hire him for more work, which would help him relax the most right now.

Likewise, he’s a Payday reporter so he travels cheap, but it would be good to get him somewhere nice to stay that’s safe and comfortable on the road. Donate so Zach can get some rest and get back in the fight after Labor Day’s (socially distant) picnic on Monday at Forbes and Braddock. (RSVP reminder here)

Zach’s instruction to me in these traumatic situations are always very clear, “fund raise immediately” because work is vital to reduce stress and freelances Zach live unfortunately precarious lifestyles.

So, as long as we gotta put him up in Pittsburgh, were gonna do it. So pass the hat so we can make Zach feel at home in the Burgh and keep him working for Payday.

Donate to Help Us Cover the Fightback against Racial Injustice & COVID-19 in Pittsburgh.