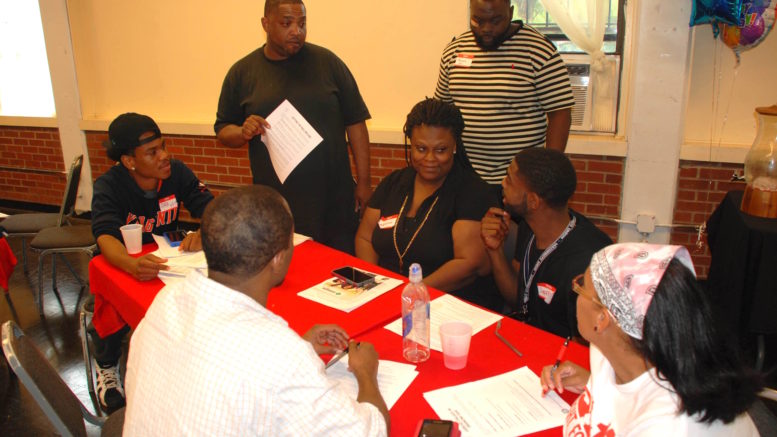 Payday Senior Labor Reporter Mike Elk traveled to the Southern Workers Assembly School in Atlanta to file the following dispatch for the Guardian:

“Can unions rebuild the labor movement in the U.S. South?”

Seated around a table in the dimly lit auditorium of Atlanta-based non-profit Project South last weekend, two dozen union activists of all ages and races were trying to solve a problem – one that has vexed the southern states for a generation.

Longshoremen from South Carolina, nurses from Florida, campus workers from Tennessee, public workers employees from North Carolina, and fast food workers had gathered to discuss one issue: how could these members of the Southern Workers Assembly help a fellow union attempt to unionize a company scattered at dozens of locations across the south? It’s a growing problem for unions, and one their opponents are determined to make sure doesn’t get any easier.

As the US economy – and particularly manufacturing – continues to expand in the south with the relocation of the auto industry, unions see big opportunities to recruit workers into the labor movement. However, they find themselves stymied by anti-union intimidation campaigns backed by big money that often include firing, intimidation and threats of plant closures if workers unionize.

With that in mind, the first question posed to the group was one that union organizers across the south find themselves asking: how would they identify workers interested in getting to join a union at a particular company, and make them comfortable enough to get involved in union organizing?

Many workers in the room suggest that they print union flyers and handbill the plant to gather contact information of sympathetic workers. However, some in the group worried that by targeting the company directly, they could scare potential supporters away. Then, a 20-year-old fast food worker named Sha Drummond raised his hand.

Drummond is new to the labor movement. A little more than a year ago, he was inspired to get involved in the Fight for $15 campaign to raise hourly wages for fast food workers after he saw some union organizers kicked out of a fast food restaurant where he worked in Richmond, Virginia. He has already helped organize several strikes and learned a tremendous amount about organizing through taking action.

“We typically throw an event or house party and invite everyone,” said Drummond. “We just don’t invite people who work there, but we invite everyone in the community so that people know they have a lot of support. They know that people have their back.”

Donald Quick, a longtime veteran of the North Carolina Public Service Workers Union UE Local 150, quickly suggested that perhaps they could use social media to identify workers to invite to the event. While Drummond and Quick are separated by many years, they have one thing in common: they are both part of unions that lack traditional collective bargaining rights, and they are willing to think outside of the box about how to organize in the south.

Inspired by the energy of the Fight for $15 movement and the growing labor movement, workers involved in the Southern Workers Assembly are attempting to a build the groundwork for a network to inspire a mass movement of an uprising by non-union workers across the south.

However, instead of focusing on winning one intensive campaign at a high-profile employer such as Boeing or Nissan, the assembly is instead focused on building a network of smaller minority unions that lack collective bargaining to create a groundswell of union support.

“Having a union doesn’t mean you have to have a majority of workers or a union contract,” said veteran union organizer Saladin Muhammad, co-founder of the Southern Workers Assembly. “A union exists whenever workers come together to form an organization to build power.”

At the outset of the American labor movement, before the passage of the National Labor Relations Act in 1935, minority unions were quite common. Small groups of workers would often band together to put pressure on the boss. They would work the company’s internal handbooks and grievance procedures, rally community and political support to put pressure on employers, engage in shop floor disobedience and, if all else failed, go out on strike to stick it to the boss.

Eventually, these networks of minority unions built up over decades lead to the massive organizing gains they achieved in the 1930s.

“Rebuilding the labor movement in the south is going to require us to get back to the basics of what a union is,” said Muhammad. “A union is about workers building power through organization.”

However, after the mass organizing waves of the 1930s, unions largely struck to the traditional model of only representing workers in unions. This model of union organizing often relied on union representatives and labor lawyers to make sure union contracts are enforced.

Now, with the success of the strikes of Fight for $15 in building a mass movement, unions in the South are once again beginning to experiment with minority unions – where workers voluntarily join, and pay dues, to their local union rather than the union representing entire workforce at an employer.

In 2014, after losing a high-profile union election at Volkswagen in Chattanooga, autoworkers there formed a minority union, Local 42. Following their lead, autoworkers at a Mercedes plant in Vance, Alabama, decided to form UAW Local 112, despite lacking a majority of workers in the plant who wanted to be members of the union.

Even without collective bargaining rights, both unions have won changes in company policies through protests and legal action. More importantly, the unions have shown real power by getting activists their jobs back who they feel wrongfully fired.

Now the Southern Workers Assembly is hoping to link these new minority union efforts with other groups of non-union workers, as workers in the south face the uphill battle of rebuilding.

The United Campus Workers (UCW) in Tennessee, an affiliate of Communication Workers of America, is one of those minority unions that has built power despite lacking traditional union rights.

Originally formed in 1999 to fight for living wages for workers at the University of Tennessee, UCW has now grown into a full-fledged union despite lacking collective bargaining rights. The group has over 2,000 members who pay monthly dues, which allows the union to have a small staff. It also enabled the UCW to hold training courses for union activists, organize rallies and lobby days, and campaign for state legislators who share their agenda of improving conditions for workers in the University of Tennessee system.

Jessica Buttermore, an administration assistant at the University of Memphis, decided to join UCW after attending the union’s annual lobby day in Nashville five years ago. She said that at first when she got active, it was sometimes difficult to get people to voluntarily agree to pay monthly dues. However, after the union won a $3 across-the-board rise in minimum wage for campus workers two years ago, she says it has become a lot easier to get workers to feel ownership of their minority union.

For many involved in the Southern Workers School this weekend in Atlanta, rebuilding the labor movement is less about winning union elections and more about teaching workers about the power they have to affect change.

“We gotta bring forces together who are not unionized to engage them in the labor movement,” says Muhammad. “When people think that the starting point for being in the labor movement is a union opposed to a worker organization that’s when we lose power. To organize the South, we must make people realize how much power they already have.”

Mike Elk is a member of the Washington-Baltimore NewsGuild. He is the co-founder of Payday Report and was previously senior labor report at Politico.