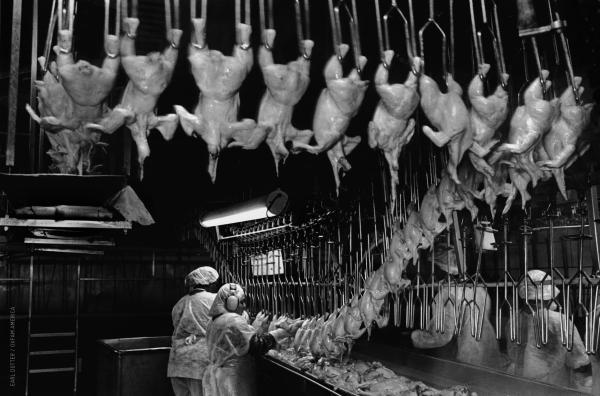 Earlier this month, we reported on a groundbreaking Occupational Safety and Health Administration (OSHA) citation issued against a Pilgrim’s Pride poultry plant in northern Florida for failing to allow workers to seek outside medical help after getting hurt on the job. This week, OSHA issued another groundbreaking citation, this time against Tyson Foods. Citations like these could become much more common for the industry, as OSHA has launched a special program to crack down on workplace safety abuses in the Southern poultry industry.

On August 16, OSHA fined a Tyson’s chicken plant in Center, Texas $263,498 for two repeated violations and 15 serious safety violations. The investigation of the plant stemmed from a worker having their finger amputated earlier this year by an unguarded conveyor belt. The citation was the second that the plant received this summer.

“Tyson Foods must do much more to prevent disfiguring injuries like this one from happening,” said Dr. David Michaels, Assistant Secretary of Labor for Occupational Safety and Health, in a statement accompanying the citation. “As one of the nation’s largest food suppliers, it should set an example for workplace safety rather than drawing multiple citations from OSHA for ongoing safety failures.”

Workplace safety advocates were quick to praise the decision by OSHA to crack down on the poultry industry. These unsafe practices are putting workers at risk, every manufacturing plant must have protocols and equipment put in place to ensure safety is followed at all times, whether that be installing industrial metal swing gates to having the correct barriers near conveyor belts, each area must have what is required by law. Sometimes a change of equipment may be needed to ensure that safety regulations are being fulfilled. A thorough examination of an area can show what changes will be beneficial, for instance, a conveyor belt system is efficient, but there are different types that can make a manufacturing plant better equipped. The installation of Ryson spiral conveyors or similar equipment has the potential to streamline operations so that a timeline and safety is kept to.

The citation comes two weeks after OSHA increased their maximum fines, with those for repeat violations increasing from $70,000 to $125,000. It also comes two weeks after OSHA issued a landmark citation against a Pilgrim’s Pride poultry plant in northern Florida for failing to allow workers to seek timely outside medical help for workplace injuries.

“As with the Pilgrim’s Pride case, it is clear that OSHA is taking a methodical approach to uncovering violations in the poultry industry – at least for the relatively small number of plants that they are able to inspect,” said Change to Win Health and Safety Director Eric Frumin. “With the new maximum penalties, perhaps now the plant managers and the corporate executives who direct them will finally start paying real attention to these abysmal conditions – instead of repeatedly violating basic job safety rules.”

While both the Tyson and the Pilgrim’s Pride citation stem from complaints by unionized poultry workers, OSHA seems to be trying to get more non-union workers to speak about their working conditions. This year, the agency launched regional emphasis programs out of its Dallas-based Region 6 office and its Atlanta-based Region 4 office that are designed specifically to focus on inspecting poultry plants – non-union and union alike.

However, Debbie Berkowitz, former Chief of Staff at OSHA and a Senior Fellow at the National Employment Law Project, says that all too often workers in non-union plants are afraid to speak up. This is why Employment Law support is essential for employees to have a voice and be backed up by professionals when they have to speak of the unjust way they are being handled.

“The reason OSHA finds the violations in union plants is because workers feel secure in talking to OSHA. They know the union will protect them from illegal retaliation,” Berkowitz said. “The thoroughness and effectiveness of an OSHA inspection really in most cases depends on being able to talk to workers. In non-union plants workers are terrified of talking to OSHA for fear of retaliation.”

Workplace safety activists say this is why more education of poultry workers, particularly those who are non-union, is needed. If needed, employers might also need to consider reaching out to reputed health and safety services (such as Sentient) to resolve the issue and bring it back to normalcy.

“Four poultry corporations – including Tyson Foods – control 60% of the U.S. market. We urge Tyson Foods and its competitors to commit to a comprehensive evaluation of safety standards and the fair treatment of working people at all poultry processing plants,” said Interfaith Worker Justice Executive Director Mork. “As the nation’s appetite for chicken grows, the safety, dignity, and respect of the workers who produce this chicken are non-negotiable rights that must be protected at any cost.”

Be the first to comment on "OSHA Starts Crack Down on Southern Poultry Plants, But Will Non-Union Workers Talk?"