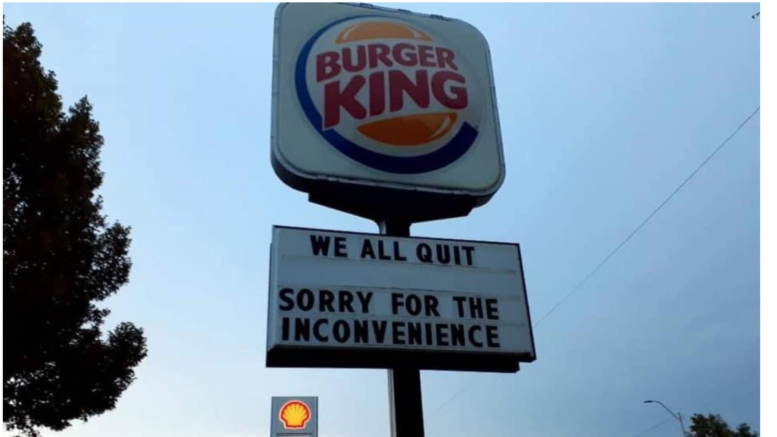 Greetings from the Burgh, where it’s a beautiful 84-degree day. The community pool is back open again (pending no life guards strikes) and hoping to get back in the pool today, but don’t worry if we see a picket line at the pool — I won’t cross.

In Lincoln, Nebraska, a Burger King billboard sign has created quite a stir after frustrated workers took down the normal lettering on the billboard that advertised the deals of the day and instead put up a sign that read: “WE ALL QUIT,” AND “SORRY FOR THE INCONVENIENCE.”

The Burger King store’s general manager Rachael Flores said that low- staffing levels made it untenable for her and others to keep working there.

“They have gone through so many district managers since I’ve been GM,” Flores told KLKN. “No one has come to the store to help me out. They’re so in and out.”

For more, check out KLKN.

Every week, Payday is seeing more and more stories of retail workers walking off the job and posting signs that later go viral. So much is happening right now and we need your help to tell that story.

Donate to Help Us Keep Covering the “Retail Worker Rebellion.”

Sign up to become one of our 600 recurring donors today.

In Munster, Indiana, PepsiCo drivers, members of Teamsters Local 142, are going on strike today after rejecting a recent contract offer that would result in employees paying $200 to $300 a month more in healthcare costs.

“We shouldn’t be paying for it in the first place. This is a multibillion-dollar company,” Pepsi truck driver Tom Albano told the Princeton Daily Clarion. “And the raises the company is offering is not going to cover, or barely cover, what your increase is going to be in your health insurance.”

For more, check out the Princeton Daily Clarion.

700 Striking Air Force Workers in Tennessee to Continue the Strike

At Arnold Air Force Base in Tullahoma, Tennessee, over 700 striking workers, members of Air Engineering Metal Trades workers, voted overwhelmingly this weekend to reject the latest offer from National Aerospace Solutions, LLC, and continue striking. The strike is now entering its second week.

One of the key issues in the strike is the cutting of disability pay, which helps construction workers when they get hurt on the job or come down with a severe illness. The Tullahoma News has a long look at the issues driving the strike:

On the disability front, [boilermaker Robby] Brannan said he’s seen significant cuts over the years. Throughout his tenure at the base, he said disability coverage has shrunk from an unlimited coverage amount to three years, down further to two years and its current position at 18 months.

“That’s where we stand right now, is at 18 months,” he said. “The people weren’t going to stand by and let that happen again.”

In his opinion, he said, the proposed cut to disability was the “determining factor” in the decision to strike.

“It protects us on the job and off,” he said, citing workplace injuries and off-the-job situations that could force someone to take time off work, like severe car accidents or cancer diagnoses. “People know the stories there. They’re wanting to cut it down to 12 months; anybody could be out for a year for any of those [situations].”

For more, check out the Tullahoma News

In Reno, Nevada, a transit contractor, Keolis Transit of North America, is accusing Teamsters Local 533 of engaging in a “sickout strike.” On Friday, 16 routes were canceled because there weren’t enough drivers to fill the routes.

However, Teamsters Local 533 President Gary Watson said that extra drivers were available to work, but no one was contacted.

“They’re suppose to be calling the extra work list,” Watson told ThisIsReno.com. “It’s my understanding that they are not.”

For more, check out ThisIsReno.Com