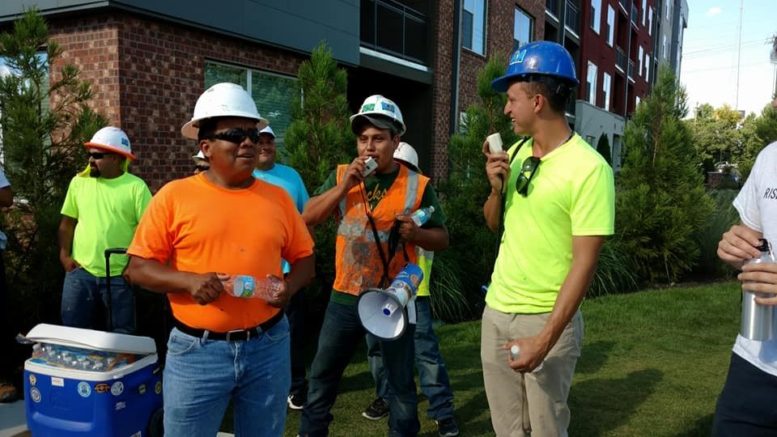 A growing wave of strikes by exploited Latino construction workers is poised to breed new energy into the Southern labor movement this summer.

Last month, 100 Latino non-union workers in Louisville went on strike after they discovered they were being paid $14 an hour less than their white counterparts doing similar work. The workers stayed on strike for nearly two days and are now attempting to unionize with the Carpenters Union Local 175.

Now, 65 Latino construction workers in Nashville have been out on strike since Friday.

The workers decided to go on strike after not being paid for nearly three weeks of work.

The workers were initially persuaded to come to Tennessee from all over the U.S. to work on a short-term project doing siding and stucco work on luxury condos in the Nashville’s Germantown neighborhood. Their employer, Lifestyle Communities, provided housing for them.

However, after working for three weeks without pay, the workers grew frustrated. They confronted management, which refused to give it to them.

Only after many protests did the employers finally agree to give some of the workers $250 so that they could buy food. However, according to workers, many of them did not even receive that.

“For weeks now they’ve been telling us that we have to wait ‘til tomorrow or next week, that they’ll pay us tomorrow, or the next day, or the next day,” says one worker who wished to remain anonymous. “We came here to work for the millionaires that live here, who benefit from our work, but we have families, and we’re here to tell them that they can’t treat us that way.”

Lifestyle Communities did not return Payday’s request for comment.

Some of the construction workers that traveled to Nashville have decided to go back home. Others, after meeting with Workers Dignity, decided to go on strike and protest against Lifestyle Communities.

“We are here to work and make money, and anybody would do the same thing—stop working if you aren’t paid what you are promised,” says Josué Vasquez.  “We plan to stay out for as long as it takes to find a solution.”

The strike has continued for five days. To make ends meet, workers have banded together. They’ve helped raise additional funds from other supportive workers, while some of the striking construction workers who have money have shared it with others.

Building trade union activists tell Payday Report that they are currently organizing strike efforts at other companies and that similar strikes could spark this summer.

With the Latino population growing in the South, many activists say that the key to organizing the South is harnessing solidarity across the races.

“There is most definitely a growing militancy among Latino workers in the South,” says Workers Dignity organizer Alexa Malischack. “I think we are going to see a lot more people taking action.”

Be the first to comment on "In Nashville, A Strike Wave of Non-Union Latino Construction Workers Grows"