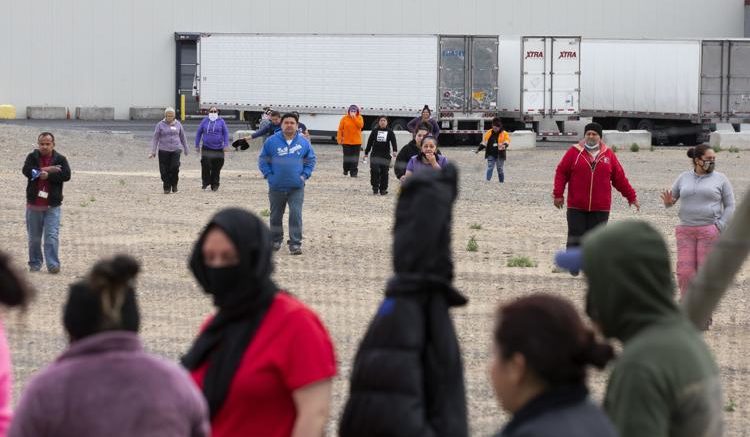 Greetings from the Burgh, where my lungs are finally starting to feel better.

200 Strikes On the Map Since March 1st

The mass strike movement continues to build. Today, we added our 200th strike to the map.

Check out our map updates that include some recently documented prison labor strikes from last month, a strike of pillow manufacturers in Mississippi, and a wave of strikes by fruit workers in Washington State.

Fruit Workers Walk Off at 3 Sites in Washington State

For the past decade, the Yakima Valley in Washington has been a hotbed of strike activity and organizing, with much of the activity coming fromimmigrant fruit workers organized by Familias Unidas Por La Justicia, an independent farmworker union in the region.

Living up to their reputation, the largely immigrant workforce of fruit workers – at 3 different sites across Yakima – walked off the job this week.

“It took a good couple weeks before they said anything to us,” Allan Brothers worker Jennifer Garton told KAPP-KVEW. “They had a big meeting with us and told us someone inside had contracted it and this was two weeks after that.”

Today, immigrant workers at twoother fruit warehouses, Matson Fruit and Jack Frost Fruit in the Yakima Valley, walked off the job to join them.

“Everyone is scared to get infected,” 28-year-old Matson Fruit worker Rosa Leon told the Yakima Herald.

For more, check out the Facebook page of Familias Unidas por la Justicia.

While it’s possible to socially distance with farmworkers, many employers in a rush for profit are simply not doing it. Now, we are going to see the beginningstages of an outbreak.

The threat of widespread outbreaks like those that have struck meat plants is not a hypothetical concern. There are already outbreaks involving farmworkers in several states. In New York, one of the largest coronavirus clusters in the state is a greenhouse farm where 169 out of 340 workers have tested positive.

In Washington, one large orchard recently revealed that more than 50 of the 70 workers it had tested for Covid-19 tested positive, including many who were asymptomatic. Both the New York and Washington farms began testing workers after some showed symptoms. In North Carolina, a strawberry grower temporarily closed after eight workers tested positive. In Monterey County, Calif., a major berry growing area,nearly one in four coronavirus cases is an agricultural worker, according to local officials.

Most farmworkers live in close quarters, often sleeping in dormitory-style rooms with several bunk beds. They travel from field to field on tightly-packed buses and often stick together for errands like buying groceries or going to the bank.

“It makes it impossible to observe recommendations of social distancing,” said Gerardo Reyes Chavez, an experienced farm worker and organizer for the Coalition of Immokalee Workers in Immokalee, Fla., an area known as the nation’s tomato capital.

To read the full story, check out Politico.

Over 12,500 Meatpackers Have COVID

Last week, a number of hackers attacked the Ohio unemployment website after it launched an app for employers to report workers for collecting unemployment while refusing to work often in unsafe conditions.

The Cleveland Plain Dealer has the story:

State officials are re-evaluating whether to kick workers off unemployment benefits if they don’t return during the pandemic, Ohio Department of Job and Family Services Director Kimberly Hall said.

“No benefits are being denied right now as a result of a person’s decision not to return to work while we continue to evaluate the policy,” Hall said on Monday.

Hall’s announcement comes after news first reported by Vice on Friday that a hacker developed code to muck up a section of the Ohio unemployment system in which employers were to report workers who didn’t return to work during the pandemic.

The anonymous hacker released code to allow anyone to submit fake information to the state’s site, which was then simplified by a software engineer to make it easier for people to use. Vice reports that the hacker said his goal was to overwhelm the system with incorrect information, which would make it harder for the state to weed out the legitimate submissions and deny people benefits.

To protect against hackers, businesses and organizations should have effective cybersecurity strategies in place to prevent such incidents and breaches from ever occurring. Check out these AWS security best practices to better equip yourself with the knowledge that your business needs to succeed in the digital world without fear of attack or damage to your reputation.

For more, check out the Cleveland Plain Dealer

Finally, after years of shifting reporters to Cleveland.com to get out from the union contract, Cleveland Plain Dealer finally eliminated their unIon.

Effective May 17th, the NewsGuild will no longer represent reporters at the Cleveland Plain Dealer as no workers will longer be employed directly by the paper.

“Twenty years ago The Plain Dealer had more than 340 journalists. In its heyday, it had even more. Today, it has four,” said the Northeast Ohio Newspaper Guild in a statement.

“Advance and Plain Dealer have slashed the newsroom while creating a separate non-union newsroom. The end of the unit, as unionization is picking up at other media companies across the country, is a sad moment in Cleveland history” said the union

Best of luck to the NewsGuild as they have pledged to unionize Cleveland.com

That’s all for today folks, donate so we can keep covering labor’s fight back against COVID.