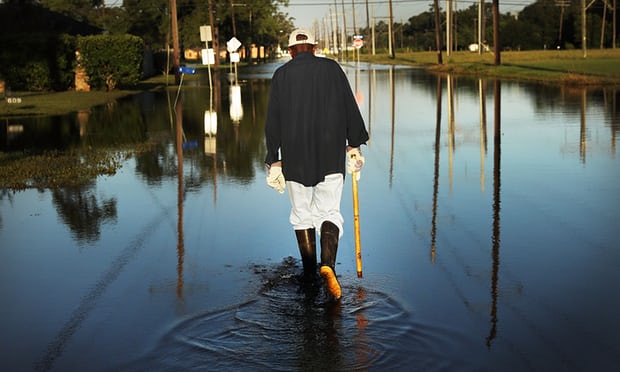 Payday Senior Labor Reporter Mike Elk filed a startling dispatch for the Guardian looking at the conditions that will likely claim the lives of many undocumented hurricane clean-up workers:

The recent survey of 361 Latino day laborers conducted by University of Illinois at Chicago, done in conjunction with the National Day Laborer Organizing Network (NDLON) and Fe y Justicia Worker Center and funded by the Ford Foundation, paints a startling picture of the inequities plaguing Houston’s clean up.

Last month, the Guardian reported that workplace safety groups have criticized the Occupational Safety and Health Administration (Osha) for failing to coordinate their health and safety training as the Obama administration did.

Unsafe conditions have already taken the life of one worker, 31-year-old Josue Zurita, an immigrant from Mexico. Zurita, a carpenter, had worked on several flood-damaged homes that had become infected with the flesh-eating bacteria necrotizing fasciitis.

Be the first to comment on "Guardian: 61% of Undocumented Hurricane Clean Up Workers Lack Proper Respiratory Equipment"