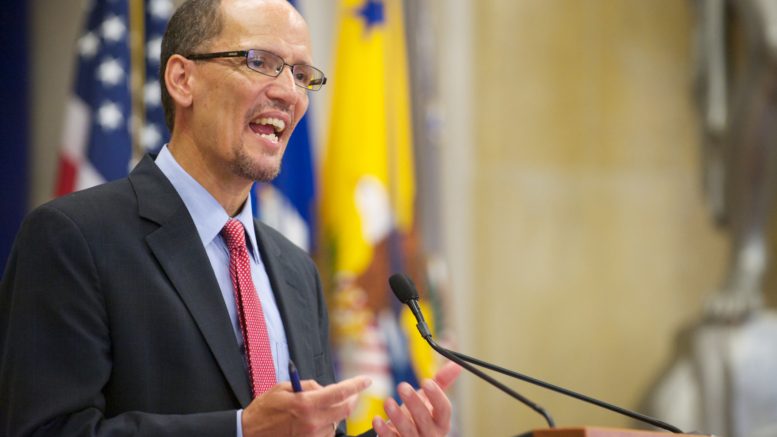 Secretary of Labor Tom Perez giving a speech as Assistant United States Attorney General, in Washington D.C. on the 22nd anniversary of the passage of the Americans with Disabilities Act, July 26, 2012. Photo: Lonnie Tague

Payday has learned that in recent days top officials within organized labor have increasingly been pushing Labor Secretary Tom Perez as their preferred choice for Hillary Clinton’s pick for Vice President, arguing that he could be the forceful voice within the White House that organized labor has long desired.

While many in organized labor initially favored Elizabeth Warren as Clinton’s V.P – and many in the rank and file continue to favor the progressive senator from Massachusetts – it appears increasingly unlikely that Warren will be picked as Vice President. The relationship between Clinton and Warren seems to be cold, given Warren’s past public criticism of Clinton selling out to Wall Street. Furthermore, Clinton has signaled that she wants a Vice President who will be a partner in governing, and fears remain that Warren would not fall in line with Clinton’s wishes.

Though Perez did not know Clinton before the past year, both Hillary and Bill Clinton have stated that they have developed a close and intimate relationship with the Secretary of Labor over the past year of campaigning. Perez has traveled with Clinton extensively and helped shore up labor support for her campaign during the primary. POLITICO reported this week that Clinton has spent far more time campaigning and meeting in private with Perez that any other potential running mate.

“With Joe Biden, we had a messenger boy. With someone like Tom Perez, we would finally have a Vice President, who would know how to get stuff done for labor within the White House,” one top labor official privy to discussions within the AFL-CIO told Payday Report.

Tom Perez has won praise from organized labor for his role as Secretary of Labor and has been labeled by some as “the most important Labor Secretary since Frances Perkins.”

“[Perkins] was the gold standard. If she is gold, [Perez] is certainly silver,” Christine Owens, executive director of the National Employment Law Project, told the American Prospect in a lengthy profile in June.

As Secretary of Labor, Perez has used aggressive administrative action to bypass legislative inaction on a number of labor’s top priorities. After nearly 40 years of delay, Perez was able to finally shepherd through a new OSHA rule regulating the use of silica dust, known to create silicosis and cancer. Perez also beefed up the Department of Labor’s wage and hour division and passed a landmark rule that would make corporations disclose the outside union busting consultants and law firms they employ.

By far, though, Perez’s most impressive accomplishment was extending overtime protections to all salaried employees making less than $47,476 a year, which will take effect on December 1. The previous threshold had been set at $23,660 a year. According to an analysis by the Economic Policy Institute, the new overtime rule will be a de facto pay raise for approximately 12.5 million American workers.

Given Perez’s deep knowledge of the Department of Labor and relationships with organized labor, many in the labor movement feel that he would be able to make sure that labor’s priorities were addressed in a potential Clinton administration.

“The guy knows how to get stuff done and we have no doubt that as Vice President he would be able to get a lot more done for labor,” according to one top labor official in an interview with Payday Report.

Not only has Perez won praise from organized labor, but he has been seen as a champion of the disabled. As Secretary of Labor, Perez has worked hard to close the loophole in federal labor law that allows approximately 400,000 disabled workers to be paid below the minimum wage. In 2013, Perez initiated enforcement actions in conjunction with the Department of Justice to crack down on employers paying disabled workers below the minimum wage without providing them with true job training opportunities.

In 2014, Perez barred federal contractors from paying disabled workers employed in service professions from being paid less than $10.10. The move was hailed as the most important change to disability employment law since the Americans with Disabilities Act and has led to a rush of states outlawing the use of the subminimum wage in their employment practices.

“Tom Perez has been the greatest disability rights hero of the Obama Administration,” says Ari Ne’eman, who served in the Obama administration for five years on the National Council of Disability.

“Under his leadership at the Justice Department Civil Rights Division, he drove unprecedented positive change in disability services and ADA enforcement across the country,” says Ne’eman. “I think the disability rights community would be thrilled to see him continue his leadership in a new capacity, whatever that may be. His record on these issues would drive turnout from sections of the electorate that others haven’t known how to reach.”

It remains unclear if Hillary Clinton will pick Tom Perez for her running mate. What is clear, from conversations with multiple labor officials, is that organized labor is increasingly pushing the Clinton campaign to pick Perez.

The Clinton campaign had not responded to requests for comment on this story at the time of publication.

Mike Elk is an award-winning labor reporter, who previously served as senior labor reporter at POLITICO and as an investigative reporter at In These Times. Based in Chattanooga, Tennessee he is co-founder of Payday Report.

Be the first to comment on "Exclusive: Organized Labor Increasingly Pushing Perez as VP"