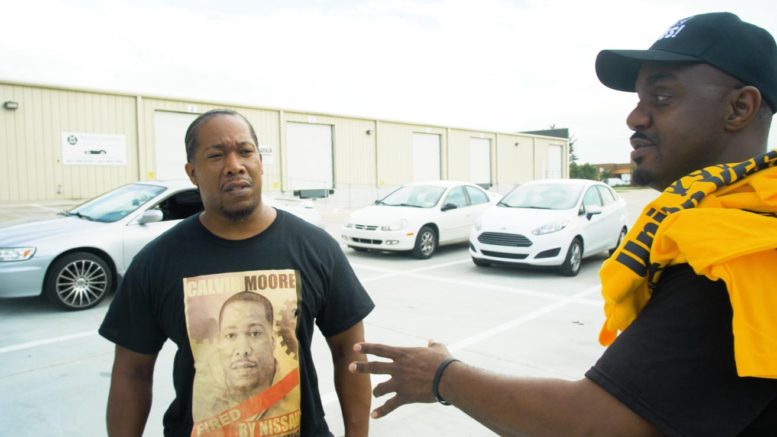 CANTON, Miss. — Nearly every business around the Nissan plant displays a sign that reads, “Our Team, Our Future, Vote No  August 3-4.”

The message at and around the Nissan plant is clear: A vote for a union hurts the economic future of Canton. As the more than 3,500 employees vote today and tomorrow on whether or not to join the UAW, Nissan’s campaign against unionization continues. The automobile manufacturer has touted business and civic leaders who warn workers that although they think a union will help them, in reality, it will hurt everyone in their community and even the entire state.

“If you want to take away your job, if you want to end manufacturing as we know it in Mississippi, just start expanding unions,” Mississippi Gov. Phil Bryant warned last week.

That message is being reinforced on airways, in signs, and in awkward mandatory meetings where supervisors tell employees that a union would eliminate Nissan’s sense of teamwork, which they claim makes the company more innovative than American-based automakers.

Such meetings can last as long as an hour. In them, workers are routinely reminded of times when management looked away at minor infractions by employees, such as being late to work or getting extra sick time. Other workers currently employed as temporary workers by Kelly Services, are now being offered “pathways” to permanent employment as Nissan begs for workers to get them a “second chance,”

Late last week, the NLRB filed a complaint against Nissan charging that the company has broken the law in intimidating workers to vote against the union.

Nissan has denied the charges and plans to appeal them.

“The UAW has launched another set of baseless allegations against Nissan Canton and threatened to issue more,” wrote Nissan spokesperson Parul Baraj in a statement denouncing the charges.

While the NLRB waits to take action against Nissan, it’s clear that the one-on-one anti-union meetings are having a very real effect.

“Everyone is scared in the plant, both pro-union and anti-union,” said one worker, who wished to speak to Payday on a condition of anonymity. “Folks are just plain scared.”

Some workers say that the meetings become less awkward if you show a willingness to give Nissan a second chance.

Workers interviewed by Payday Report say that the company has begun offering promotions with raises as much as $5 an hour. Other workers say they have been offered deals on new used cars as a sign of what management is willing to do if workers vote down the union.

“We are gonna treat ourselves right when we get this contract,” Nissan worker Robert Bathorn says he tells young workers when they get offered perks.

Other workers say that they are hanging tough in the closing days of the campaign, building solidarity inside the plant despite the culture of fear.

Nissan workers Robert Hathorn and Calvin Moore discuss how workers are struggling with one-on-one anti-union meetings and the culture of workplace organizing in Canton, Miss.

Be the first to comment on "EXCLUSIVE: Nissan Workers Talk Their Struggles With One-on-One Anti-Union Meetings (Video)"